This is a recap of the ninth episode of the third season of Orange Is the New Black, a full-length stop-motion animated film about the intergalactic sexual exploits of Sunflower Rockcocker’s lesbian followers.

Piper’s Panties is an outrageous success. The inmates are making them, wearing them, dropping them off at the correct location at the correct time, and the new Babyface Guard is smuggling them out the door to Piper’s brother, who is selling them on the Dark Web. In addition to exploiting her fellow inmates just like the giant corporation of white guys who took over Litchfield, Piper is also enjoying staring lustilly at Ruby Rose all the day long. It’s a good time to be Piper Chapman. 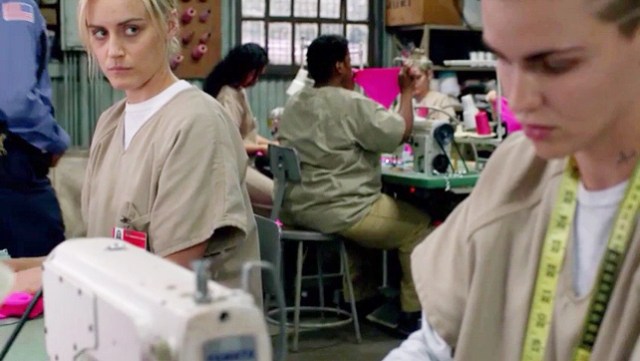 My milkshake brings all the bois to the yard. 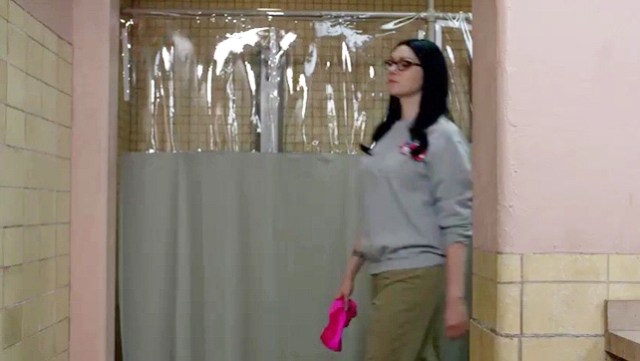 Damn right, it’s better than yours.

It’s also — finally! — a good time to be Suzanne Warren. Her erotic fiction has become as worshipped as Norma in these hallowed halls, and so has Suzanne herself. Her groupies crowd around in the bathroom and the cafeteria and talk about what a genius she is, about her characters’ motivations, about the various sorts of tentacled situations they would also like to find themselves in with ol’ Sunflower. Suzanne becoming a beloved literary icon for just being her weird, wonderful self is hands down my favorite thing to ever happen on this show. (Maybe next season Soso can catch such a break.)

It is not a good time to be one of the dozens of Litchfield-ians who have recently converted to Judaism to avoid eating the slop they’re being served by their new corporate overlords. Danny has brought in a Rent-A-Rabbi to test them on their Jewish-ness to see if they actually qualify for kosher meals, which Caputo impotently complains is just another in a seemingly endless line of jackass behaviors by MCC. He’s pretty sure Danny’s violating the Constitution and also possibly is an Orwellian nightmare. Danny shrugs off the criticism like he shrugs off all criticism, and then goes home to swim in his vault full of gold coins like Scrooge McDuck. 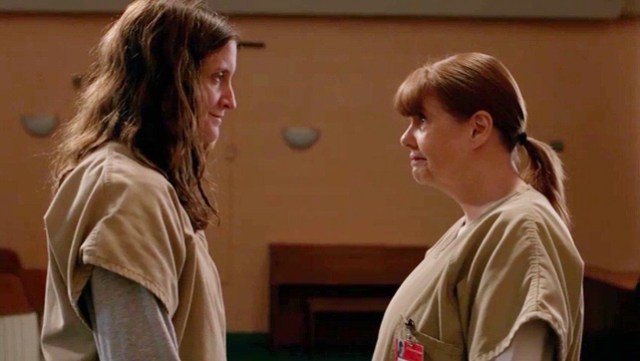 You painted the heart on Pluto, didn’t you, Norma?

Norma and her followers are having a service in the chapel when the lady who runs the Catholic group clomps in and kicks them out. She says they can’t just hang out in here and seek spiritual enlightenment unless they’re devoted members of a recognized religion that is responsible for the murder of millions of people throughout the course of human history. Also they need rules. Written ones. Leanne jumps up and says, “Hey! We’ve got a belief system; we believe in kindness and acceptance, and finding the peace within that can then radiate out into the world and create change. Through silent meditation, we address the war of pain and loneliness and tame it. And through reflection, we can see nothingness. And in nothingness, we find clarity. We have faith.”

Flashback! Leanne is tripping balls around a fire with some other kids who are also high and saying things about the ephemeral nature of life and the thirst of a weary soul while also chomping on some s’mores. Leanne excuses herself to use the restroom and stare in the mirror for a long time. The next morning, she stashes her backpack full of drugs in a cornfield and puts on her bonnet and walks home past a horse and buggy. Leanne is Amish, y’all. Amazing reveal! She walks into the front door of her house and talks to her mama in German and tells her she’s home from Rumspringa and ready to get her baptism on. 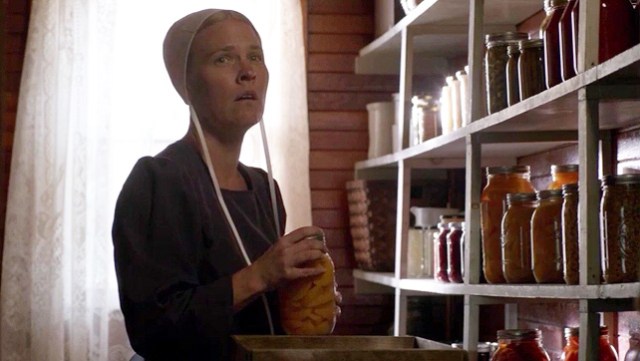 You scared the shit out of me! 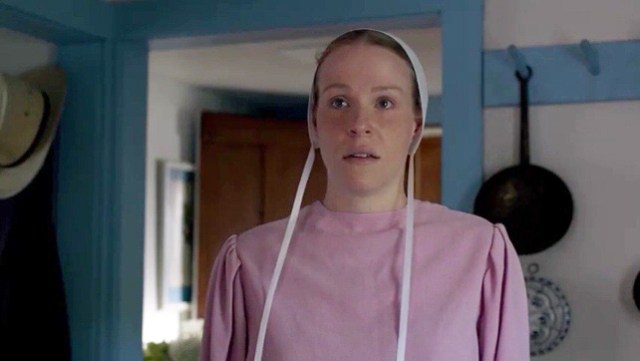 I know I look like a life-sized Cabbage Patch Doll right now, but it’s me! Your human daughter!

Red is so dejected about the new horrible bags of food she’s being forced to serve everyone that she has taken to lounging away her afternoon playing gin with the staff and making gagging noises instead of being the boss of the kitchen. It is into this bleak scene that Sophia wanders to yell at Gloria about how their sons teamed up to beat the hell out of another kid so bad that he ended up in the hospital. Sophia thinks it’s Bennie’s bad. Gloria thinks it’s Michael’s. Unfortunately for Gloria, Sophia’s the one with the car and the wife willing to drive it to Litchfield, so Bennie’s not invited to visit anymore.

Out at the loading dock, Coates is acting real familiar with Pennsatucky about donuts while she waits for the kitchen people to get the new slop bags out of the van. She’s aloof and so what and whatever, and he wants to know what in the world could be causing her to act like they’re not a couple of John Greene characters in the full blossom of love. It’s because she’s a prisoner and he’s a guard and he’s going to ruin everything if the other inmates realize they’ve become buddies. (Spoiler alert: That is not how he’s going to ruin everything! He sucks infinitely worse than that and I hate him with all my whole heart!) 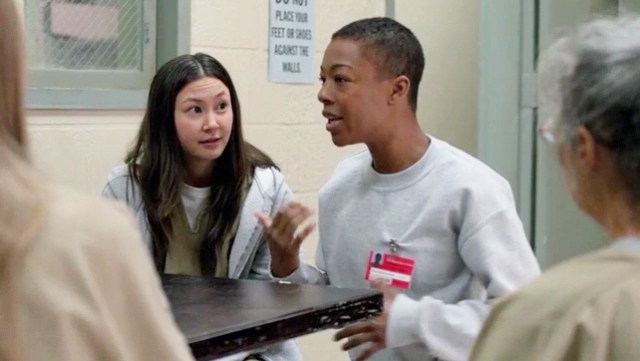 A lot of people ship us, though, Poussey. 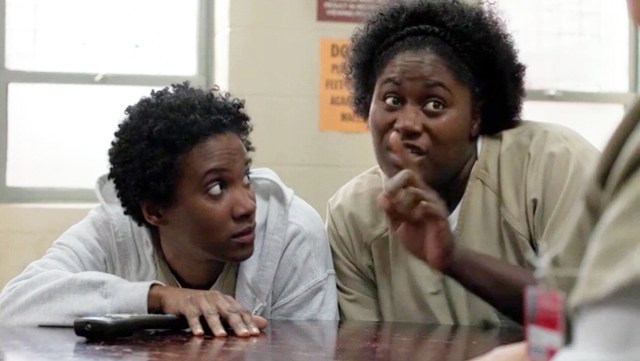 In the TV room, Taystee, Janae, Yoga Jones and Sister Ingalls are gathered for their daily news fix on the fate of Judy King. When Poussey arrives, they scoot over to make room for her to cuddle on in, but she’s there for a meeting of Normaism. She and Soso have joined up for the same reason: because they’re lost and alone and fully, clinically depressed. They want the clear eyes, full hearts part of this whole thing, but Leanne has decided that if they don’t have hard-ass commandments written in Elizabethan English, no one’s going to take them seriously. Soso pushes back against her and gets booted right out of Normaism. Poussey’s not feeling it. If she wanted to join the cult of a tyrant, she would have just followed Vee’s orders a whole season ago. She splits to re-up her membership in the Judy King Fan Club.

Flashback! At Leanne’s baptism, she takes a moment to break all the rules of being a woman and speak in church. It’s just that she’s so overwhelmed with gratitude that she gets to come home and be part of this community again, that they’ve welcomed her back. She quotes Rachel Berry, all, “Being a part of something special makes you special,” but before she can burst into a solo of “Defying Gravity,” her dad shushes her and the pastor baptizes her and that’s that. She apologizes to her pops when they’re leaving church, but he says he’d rather have one of her than ten silent, pious daughters. 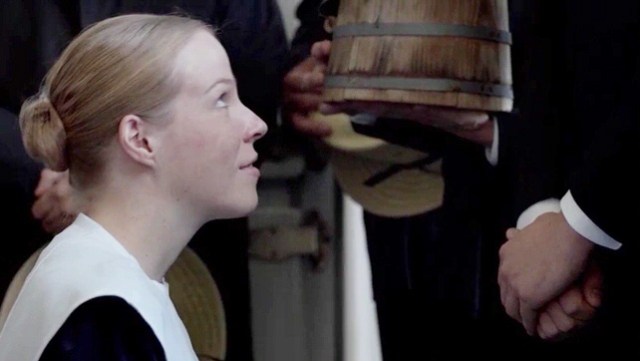 If you could teach me to turn water into wine, that’d be really useful for my future life.

God tests his statement as soon as it comes out of his mouth. Some police show up clutching Leanne’s meth-filled backpack that she left in the corn.