Every queer person I know tells a story about the TV character that changed their life. From Ellen coming out to Willow falling in love with Tara to Santana wearing that Lebanese t-shirt to Emily Fields always getting the girl to nearly every woman in Litchfield, LGBT TV characters have changed the shape of the world. In our own personal worlds, these characters have shown us reflections of who we are, and the affirmation that we’re not alone has given us the courage to live more authentic lives. In the world at large, LGBT TV characters have shifted the attitudes of our entire culture, exposing people in even the most rural places in the United States to the truth that gay people live and love like everyone else.

Playing Gay: How America Came Out on Television is a documentary about the story behind the stories that have informed our queer experience in this country. Autostraddle’s collective girlfriend, Dannielle Owens-Reid, is tag-teaming with executive producers Wilson Cruz and Wendy Abrams; producer David Permut; and EP/director David Bender to bring this thing to life. Here’s a trailer:

Here is some brand new art that no one has even seen before, but Dannielle is giving it to you because she loves you the best. 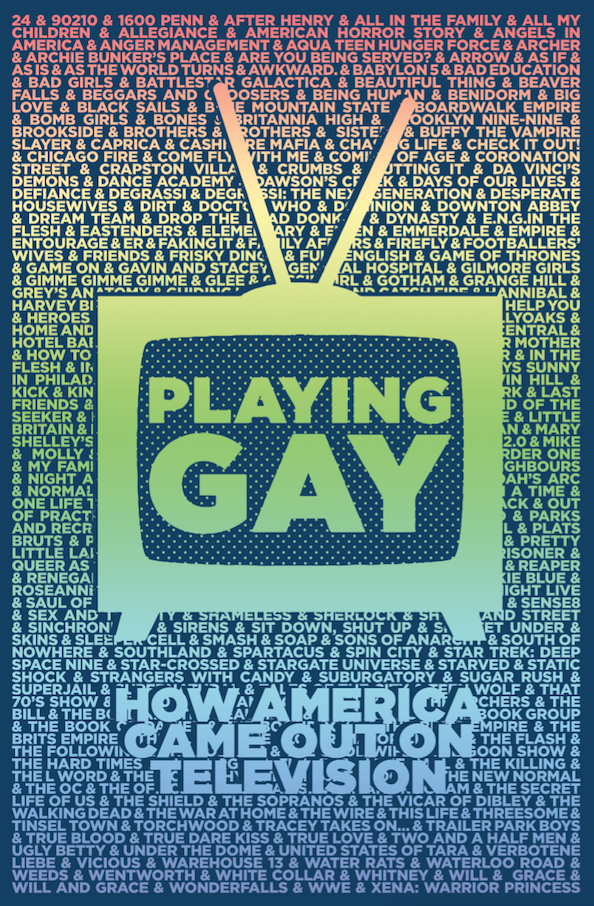 Here are five questions Dannielle was generous enough to answer for me about her own experiences with LGBT people on TV.

You probably get asked to do stuff like this all the time, right? What about this project makes it feel close to your heart?

Yeah, I totally do, and I actually don’t really love consulting on Kickstarters. It’s a ton of work and it can be pretty devoid of any real feelings. However, the second I talked to David, the director, I was hooked. The story is so important and I can’t believe it doesn’t already exist. I can’t believe there is no catalog of LGBTQ+ representation in television. HOW DID WE LET THAT HAPPEN?!! I’m so stoked to even have the smallest part in making it a reality, and I’m beside myself with how well things are coming together. This doc is going to be so fucking dope.

Can you think of an LGBT TV character who caused you to have an a-ha! moment, in terms of understanding yourself better or giving you the courage to live more authentically?

What a great question. AND A CONFUSING ONE. I grew up in Charleston, SC and had no clue that gay was a thing. I never really understood what a lesbian was, and the only association I had with anything gay was Jack on Will & Grace. (It didn’t even really register to me that Will was gay, you know what I mean?) So, all throughout middle school, high school, and the beginning of college I was at a loss. There was no gay community that I knew of, there were no cool lesbians on TV, there was no positive dialogue around bisexuality. To be completely honest, there is still not a single person on TV that looks like me. It’s really, really hard to feel comfortable presenting the way I do when it’s nearly impossible to find another person who feels the same.

I think about it all the time, what would my childhood have been like if I knew it was okay to wear “boy” clothes, or if I knew it was okay to walk standing up straight, or if I knew it was okay to say no to my boss. You know? TV has painted a picture for us, a picture that we all subscribe to because we don’t have the opportunity to see anything else. That’s why it’s so amazing when it happens. That’s why it was so fucking revolutionary to have someone like Ricky on My So-Called Life. Are you kidding me? A young man playing with gender presentation and sexuality in the early 90s? That was unheard of and now it’s starting to be expected. If there isn’t a gay character on your show, people are like, “WTF is wrong with you.”

If you could have a dinner party with five LGBT TV characters, who would you choose?

Also, I think we would all smoke weed and eat healthy snacks. So, maybe not a dinner, but we’d get together at like 5pm and hang out until around 4am, eating things like berries and nuts and hummus and shit. It would be really good. We’d proooobably talk a lot about gender presentation and how everyone in America refuses to find their true happiness.

I have a lot of favorites. If I were allowed, I would have added like 80 more characters to my aforementioned dinner, but since Autostraddle is paying, I didn’t want to be greedy.

I think there’s a lot to be said for Caitlyn Jenner. She’s not a character by any means, but watching her show felt very important to me. I love how honest she is with not having the full understanding of what it’s like to be a member of the trans community. Watching her struggle to learn, and meet people with stories that are much more difficult than hers, and seeing the way she has to navigate family and fame. I think it’s really powerful. I don’t think there has been anything that on such a large scale that really managed to tell a story like hers. It’s like Ricky on My So-Called Life, people were like ‘WAIT I LOVE HIM SO MUCH WHAT DOES IT MEAN, ALLOW ME TO OPEN MY MIND AND LEARN MORE.”

Sounder II, I knew it! If you are interested in helping make Playing Gay a reality, here’s their Kickstarter.

I would also love to hear your answers to these questions!