WHEW! Here we are, the mid-season finale! We all know the deal, the last few episodes of Black Lightning have been rough. Like, really rough. So-called “sophomore slumps” are not unheard of in television, even among critics’ darlings and universally loved fan favorites. A string of difficult to watch episodes, especially in the second year, doesn’t ever mean the end of a great television show. They are just… unfortunate to have to sit through. We’ve been putting in our time with Black Lightning and I don’t mind telling you that this finale means a brief, welcome reprieve. I’m hopeful for where we go when the show returns in January with clearer eyes and unburdened hearts (and *fingers crossed* a lot more Grace Choi!). I have no doubt that Black Lightning  can still turn this around; even with its current missteps it remains one of the best written genre shows on television. But first, we have to bare-knuckle through this damn arc, which inexplicably ends with Jennifer Pierce still on the run.

HOW!?!?!? I eat my vegetables at least five out of seven days a week! I moisturize! I don’t talk bad about others, even when it’s funny! WHY DO THE TELEVISION GODS FORSAKE ME SO!?!?!?

Let’s rewind. Last night’s episode begins with Jennifer dragging Khalil into safety in a barn on the outskirts of Freeland. They’re not only looking for a place to physically hide, but also a source of refuge so that Khalil can properly heal from the poisoned blade that Cutter used on him last week (oh yeah, by the way, the new hottie villian is named Giselle Cutter. That seems relevant. Let’s see how long she lives!). His wound is infected and he looks absolutely terrible. He’s feverish and clammy and weak. Cutter told Tobias that if wasn’t for his heightened immune system, Khalil would’ve been dead hours ago. As it stands he’s knocking on death’s door, so Jennifer spurs into action. 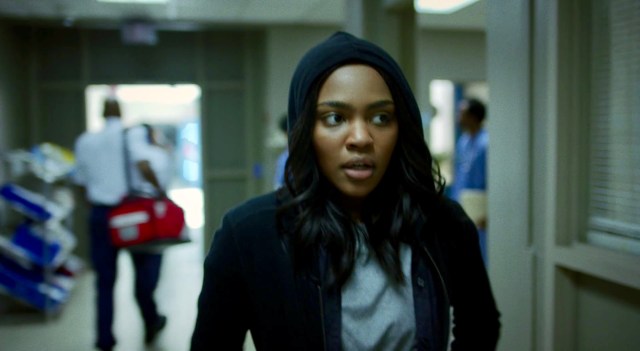 Who do I have to murder to make sure Dirty Computer wins the Grammy for Album of the Year? I need names.

This is a good time to mention that as much as I dislike this plot line (and I do!), I am absolutely floored with what a strong young actress China McClain has grown into. The entire episode falls squarely on Jen’s shoulders and she carries it like a champ. Her fear, her bravery, her action sequences, her menace, her love for Kahlil – objectively speaking, it all shines like crystal. I don’t know where China has her career sights set next, but I truly believe she could handle anything. She’s full-on leading lady material – which says a lot, I remember when she was precocious six-year-old who only knew how to scream her lines through Tyler Perry productions. Back then my girl only had one volume, and that volume was LOUD. Awww, look how far we’ve come!

So Jennifer risks going to a local hospital to steal meds for Khalil. When she’s unable to figure out the electronic password for prescriptions, she uses her powers to zap and override the system! It’s a very cool use of her powers (later she realizes that she can use her electric energy as a form of night vision, also cool) but I cannot emphasize enough how much I wish that Jennifer’s “coming into her own” plot was not tied to a boy! Moving on. As she flees the scene of the crime, Jen almost runs into her dad and sister. Jefferson’s hit peak frustration that he’s unable to find his youngest daughter, despite her being a literal generator and him being powered by electricity. Of the two, it’s Anissa who prevails by keeping a calmer head. 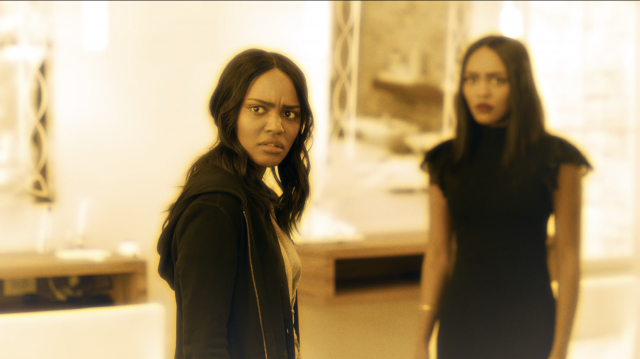 The Sister, Sister reboot I’ve been waiting for

Jennifer gives Khalil the antibiotics, but his condition worsens. That’s when she realizes what we already know – the blade was poisoned. After a short trip to her mind’s eye courtesy of Maxine Shaw: Therapist At Law, Jennifer meets her inner self. Remember what I said about China McClain’s acting this episode?? She’s giving it her all. Jennifer’s inner self and outer self work together to realize that Cutter’s been following her in the woods! Jennifer tracks down her stalker, tying her up and gagging her in the barn. This is when things get dark.

Our perfect teenager Jennifer Pierce is not one to fuck around with. The gleam in her eye is striking, her smile just a bit off-center. She feels wild, feral. Like she has nothing left to lose. After Cutter vows not to help, Jennifer hits her square in the jaw. When Cutter refuses again, she has an epiphany. Whatever poison is on the blade, Cutter must have the antidote hidden somewhere. The best way to get her to confess its location is to use the poisonous weapon on Cutter herself. I’ll be honest with you, I didn’t think Jennifer had this level of badass in her. I mean, this is next level gangsta shit. This is “Don’t talk about it, be about it” shit. Jennifer leans in close and makes good on her threat, cutting her assailant right across the cheek.

Cutter’s self preservation instinct finally wins out and she tells Jennifer to use the vile that she keeps on her necklace. Jen gives the antidote to Khalil and the remainder to their attacker (“she’s lucky” Jennifer sneers to her boyfriend as they make their escape. Good job sweet angel, I’m glad you aren’t a murderer!). By the time Anissa and Jefferson make it to the barn Jennifer, Khalil, and Cutter are long gone.

Maybe everyone would’ve done better to listen to Mama Lynn. Christine Adams continues to dig deep and excavate all of Lynn’s turmoil; it’s gripping and powerful on screen. That moment when Lynn, thinking Jennifer might be dead, weeps openly on her daughters almost-obnoxiously pink bedroom floor? I gasped. That was moment I knew, I don’t think I’ll ever be able to forgive Jennifer for this. Her motivations are young and impulsive, sure, but more than that they are incredibly, inexcusably selfish.

Lynn Stewart doesn’t stay on that bedroom floor though! Oh no, somewhere along the lines she remembered that she’s doctor and an ASA agent with the best cheekbones in television! She’s capable of anything! With Gambi’s help (sidetone: I’d like more of “spy agent Lynn Stewart being mentored by Uncle Gambi” please), Lynn plays up her best Pam Grier impression and tries to track down the teens. Personally, I think her line of questioning had real promise! Unfortunately, she also comes up without them.

Now here we are, going into break. Even Khalil has doubts if this is a good idea. He tries to get Jennifer to go home and leave him to deal with Tobias on his own. She won’t. For the first time she’s willing to say it out loud, she loves him. I won’t let Black Lightning ruin one of the hip hop generation’s greatest love anthems, Mary J. Blige and Method Man’s cover of “You’re All I Need,” so I won’t tell you that this is the song that plays as Jennifer and Khalil speed away towards another day on the run. I just won’t.

WE MADE IT!! And we’ll be back in January with more of this new, shorter recap format. Until then, I wish you the happiest of holidays and a bright, shining New Year!! And I mean that from the bottom of my heart. 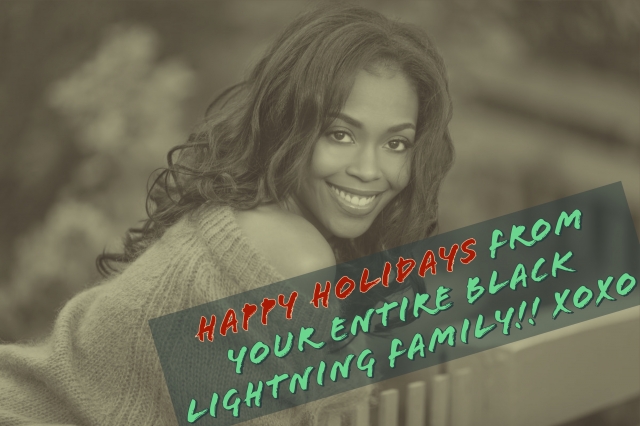 Carmen has written 477 articles for us.