What a difference a week makes. Last week I was ecstatic with all of the twists and turns ahead of us, applauding the ways that Black Lightning was challenging itself to play with its narrative structure. Our new mysteries were complex, but exciting. They were nuanced and handled with care. This week….

Honestly, I don’t know! I have no idea what we collectively just watched! To put it mildly, that was one strange episode. It felt like new concepts were introduced too quickly for us to fully grasp them, last week’s plot twists were swept aside before could process them, or sometimes – in a delightful grab bag of confusion – both of those things were happening at once!

I had no less than four conversations between last night’s episode and my writing this review in which someone told me “I can’t wait to see how you explain all of this madness and answer my questions!” Here’s the cold, uncomforting truth: I have no answers. Let’s just hold hands, start at the beginning, and see what happens!

This will surprise few people: Gambi is alive! In a pilot twist that perhaps surprised me alone, he might be my favorite male character on Black Lightning now? That’s an exaggeration. My complicated feelings with “Uncle Gambi” and his role in the ASA as a white man who assisted in the chemical genocide of a generation of black kids 30 years ago is well documented. Still, it was pretty cool to see him – not a scratch on his body, despite surviving a car crash – slowly enact revenge on the man sent to assassinate him. In front of the man’s cute dogs, no less! With their fur tied in pretty pink bows! To whom he apologized, “Sorry Ladies” after killing their Daddy and smoothly walking out the door! 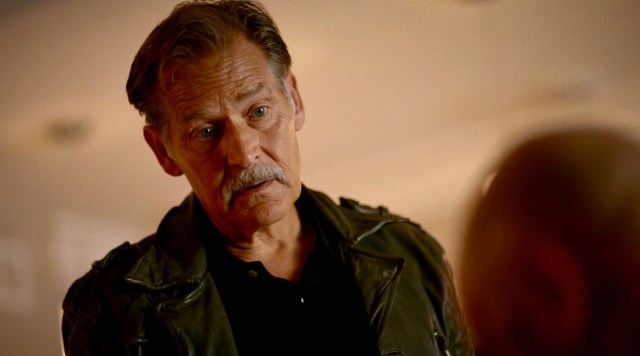 Tomorrow is (vegan if that’s your thing) Turkey Day! 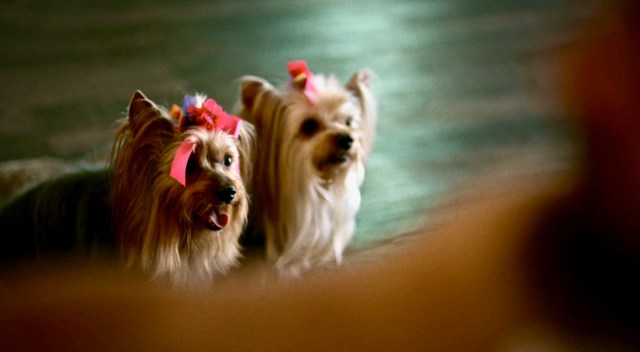 Break Out Your Finest Accessories!

So how did Gambi survive? We find out in a flashback that his car had a secret trapdoor, accessible via Apple Thumprint technology or whatever. He timed his escape just right, tumbling through that trapdoor while his car flipped on its side, so that onlookers couldn’t see him. Then, once safe in the bushes and out of sight, he blew up his own damn car! Now he’s living like some recluse character from a Quentin Tarantino film, wearing a white tank top in a grungy hotel room while eating cold take out. He doesn’t want to “go public” until he figures out exactly why someone was paying cryptocurrency (Heeey Bitcoin!) to have him killed.

The other plot point from last week that gets hurried through far too quickly, in my opinion, is the fallout from the death of those poor children being kept in ASA custody. As you’ll remember, the evil Dr. Inmate Jace conned Lynn into believing that by completing this specific experimental study, they’d be able to save all the comatose Green Light subjects. It turned out that Dr. Jace was lying! She made the decision to save the 14 lives, even when she knew it mean killing all the other children. Lynn sent Jace back to prison, and now she’s faced with telling the parents of those children the truth: She was entrusted with their children’s care, and the vast majority of them died under her watch. 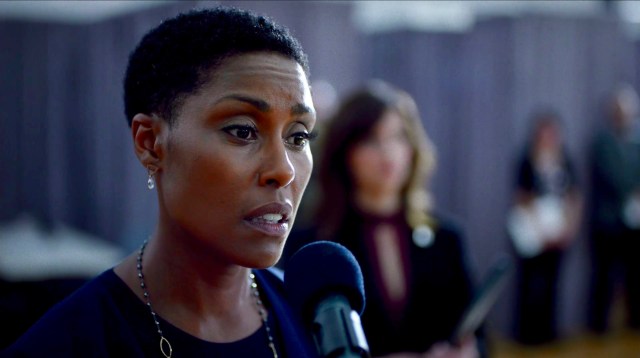 This is my punishment for serving stovetop instead of baked Mac-and-Cheese last year, isn’t it?

The parents’ reaction is about as awful as you’d expect. One Latina mother could be heard screaming over the crowd, “Y’all wouldn’t be doing us like this if we were white!” For show that usually eloquently weaves real life racial consequences into their supernatural fare, I wish Black Lightning had allowed that moment more breathing room. The Green Light experiment is based on actual historical injustices that the United States government enacted on people of color. It’s not just me saying that. In discussing Green Light, Black Lightning has made past references to the Tuskegee Experiment, the explosion of crack-cocaine in black neighborhoods under CIA watch in the 1970s, and most recently, the non-consensual experimentation on enslaved black women that become the birth of “modern reproductive medicine” in America.

The death of the Green Light children felt like an organic, if outright grim, conclusion to the analogy put forth by the show. Which is why I can’t understand their decision to rush this pivotal moment. We spend necessary time with Lynn as she struggles through her own grief and guilt, but that didn’t provide the same large-scale frame of analysis that I’ve come to expect from this show. 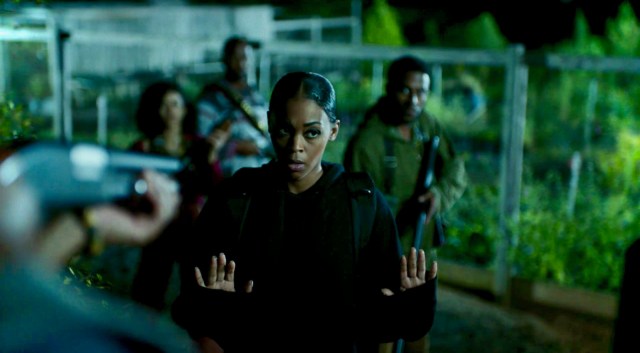 Just hand over the sweet potato pie and no one gets hurt!

Both Lynn and Gambi’s plots are shortchanged to make time for Black Lightning’s most convoluted storyline yet – the proper introduction of South Freeland. This is when things get real messy.

To begin, a vocabulary lesson:

Perdi adjective per-di: 1. colloquialism for black people living in South Freeland. The perdi have lived separated from the sanjay since the end of slavery. That separation intensified when The Looker moved to town 30 years ago.

Sanjay adjective sän-jay: 1. colloquialism for white people who live in South Freeland. The sanjay have lived within the city limits of “South Freeland” for over a hundred years, while the perdi have lived in rural areas outside of town as farmers. The Looker moved to South Freeland 30 years ago and offered the sanjay enhanced superpowers in exchange for their service to her.

The Looker noun the ^ look-er: 1. Most likely a survivor of the original Green Light vaccination that also gave Jefferson Pierce his powers. The Looker has gifts that allow her take the “element” living inside her and give it to her chosen people, the sanjay, so that they can share in her enhanced strength. This element also allows her to control the sanjay at her will and kill them as she sees fit.

Still with me? Good! As we saw last week, Anissa went to South Freeland in search of Anaya, the pregnant teen who first showed up in Rev. Holt’s free clinic pregnant with her boyfriend, Deacon. Then, Deacon died and element dripped out of his pores! He begged Anissa to look after Anaya, and Anissa makes good on her word – she shows up just in time to help Anaya with the delivery of her twins. 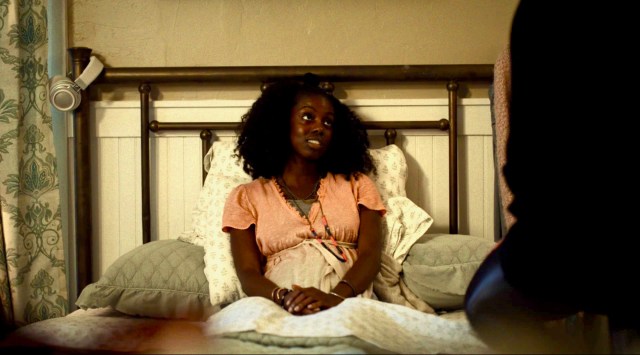 I’d rather sit up here and listen to Solange with the cousins than spend another minute downstairs at the “family table”.

The twins’ birth is controversial, on the count of the perdi being (rightfully) distrusting of the sanjay and the sanjay being racist towards the perdi. Those fraught relationships have been exploited by The Looker, who’s 100% an Ivanka Trump racist if I’ve ever seen one. You know – “racist, but make it fashion” – that type. Deacon was murdered by one of the perdi because of his interracial relationship with Anaya. Anaya’s parents have complicated feelings about their mixed race grandchildren. It’s all bad. 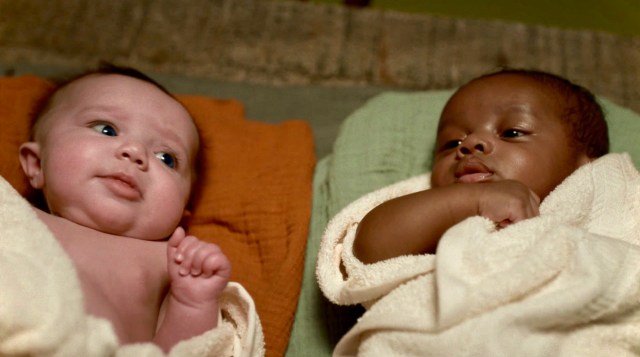 * I thought about including a shot of the big fight scene, but decided we would all rather look at these cuties instead *

Anissa convinces Anaya’s family to help getting the newborn twins to Freeland (North Freeland?) for their own safety. Along the way Anaya’s parents get highjacked by the sanjay. Now they’re missing! And The Looker has one of the twins! But, it’s the darker skinned twin, and she’s very unhappy about it. Cue my eyeroll.

At least Thunder and Black Lightning made up? Sort of? I guess?

Honestly, very little of this episode made sense to me! If it worked for you, please share your thoughts in the comments! I really want to hear them! As it currently stands, I’ll give Black Lightning credit for deciding to explore black mysticism and folklore beyond the superhero genre – we have a rich history of understanding race through the supernatural that should absolutely be explored! – but this rollout was uncharacteristically sloppy. I hope they find themselves back on surer footing next week, when Grace Choi returns, we’ll be stuffed with turkey (if that’s your thing), and all will be right with the world.

Speaking of which, did you see this ADORABLE photo that Chantal Thuy posted last night? If not, you should. Consider it a gift from me to you. ? ?

PS: I’m ignoring everything about Jennifer and Khalil because I hate it! Fa-lalalala-lala-la-la! HAPPY THANKSGIVING!! See you next week!