Last year, a series of emails between me — a queer brown woman of Indian descent — and my buddy — a white dude who dates dudes — led to us bicycling across India together. We’d never spent more than a cumulative month in the same place but had maintained a friendship through emails and Skype calls. For each of us, there was the appeal of an adventure and few obligations in our way.

We were two queers traversing a subcontinent on bicycle, through barren deserts and muggy cities and hippie-filled beach towns. I was newly single, out of a long-term relationship with a guy. India was a place I’d been a dozen times with family, my experience filtered through aunties and uncles and cousins. Danny was a long-term adventurer, a single guy who had made writing and travel his priority for much of the previous decade. 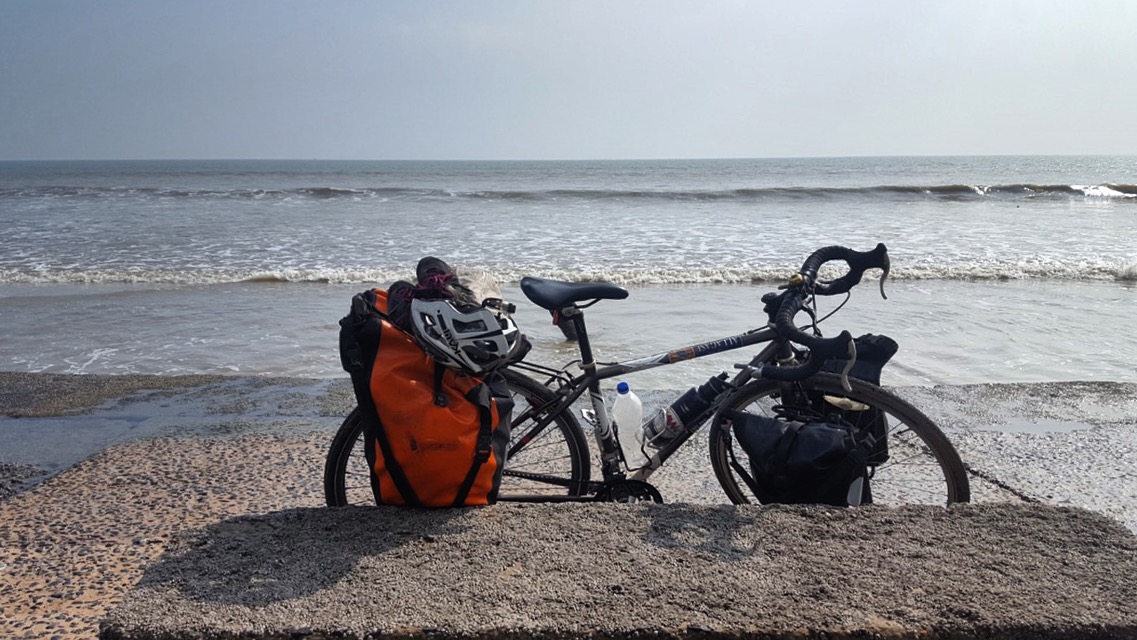 The moment we hit the Bay of Bengal, and officially had biked from the Mountains to the Ocean

Early in the trip, when men held Danny’s gaze with an intimacy we considered flirtatious, we talked about the potential for him to sleep around. There’s legally a ban on “unnatural” sex acts in India, which has been used to marginalize LGBTQ folks. The law was initially created by the British and repealed in 2009, but was reinstated in 2013. We’d heard of this law, and later learned that the ban is likely to come under review again this year.

“In Kolkata, Amra Obdhuth is a pop-up queer café and event space, meant to be a home for queer women and trans folks who have been pushed to the margins of mainstream gay movements.”

Despite the ban, there is a growing LGBTQ culture in cities all over the country. Most of the major cities, including Kolkata, Delhi, Mumbai, Chennai, have Pride parades. Mumbai, the home of Bollywood, is the home of KASHISH Mumbai International Queer Film Festival and Bombay Dost, the country’s first gay magazine. In Kolkata, Amra Obdhuth is a pop-up queer café and event space, meant to be a home for queer women and trans folks who have been pushed to the margins of mainstream gay movements. On the legal front, India’s Supreme Court has recognized transgender as a third gender, creating the legal framework for trans folks, including India’s hijra population, to receive healthcare, unemployment, and government assistance. 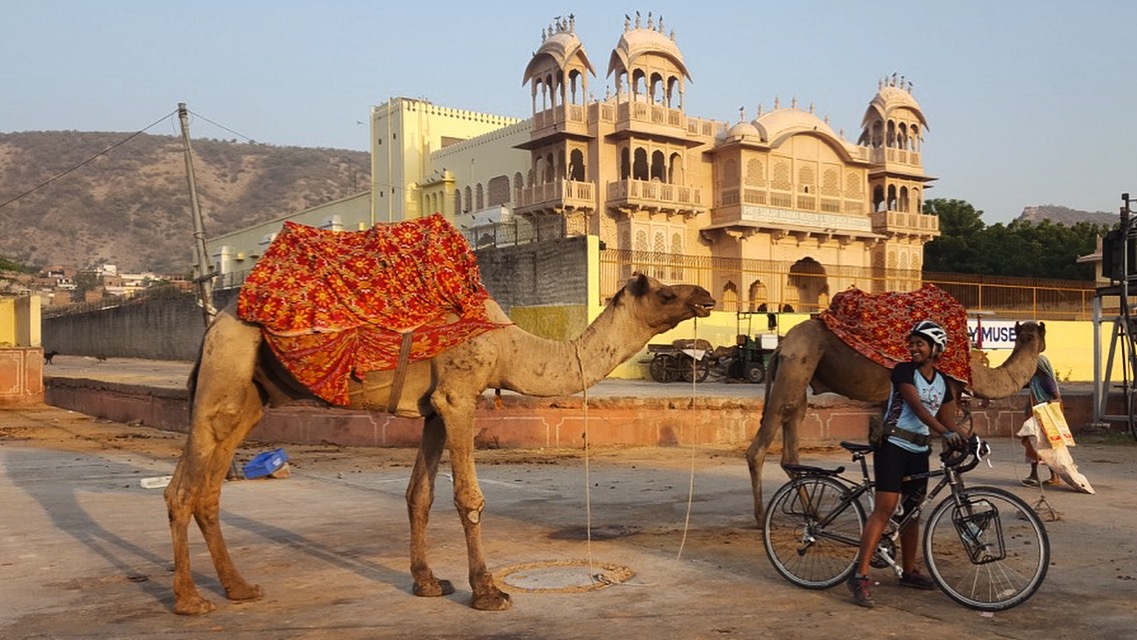 LGBTQ culture is intertwined within the history and art of India, too. More than half-way through our trip, Danny and I visited the 13th-century Konark Sun Temple, renowned for the explicit sex acts carved into the temple’s façade. One theory, our guide told us, was that the sculptures were designed as sex-education. Alongside carvings of erect penises in vaginas, we found depictions of big-breasted women fondling each other and multiple men’s penises out within a single scene. There were more orgies than we could count, and our guide delighted in showing us that no sex act was off-limits for this temple education.

“LGBTQ culture is intertwined within the history and art of India, too.”

As we rode from the Himalayas to the tip of India, we gradually became more comfortable. We communicated with hand gestures, pulled out our maps to tell the story of where we’d been, and repeated where we were from to dozens of onlookers at chai-stalls and open-air lunch counters each day. We became accustomed to how unpredictable each day was; anytime we thought we had something figured out, India would throw us a new obstacle. For example, when we thought we had our process of finding a good hotel figured out, we ended up in a town where every single hotel denied us entry. 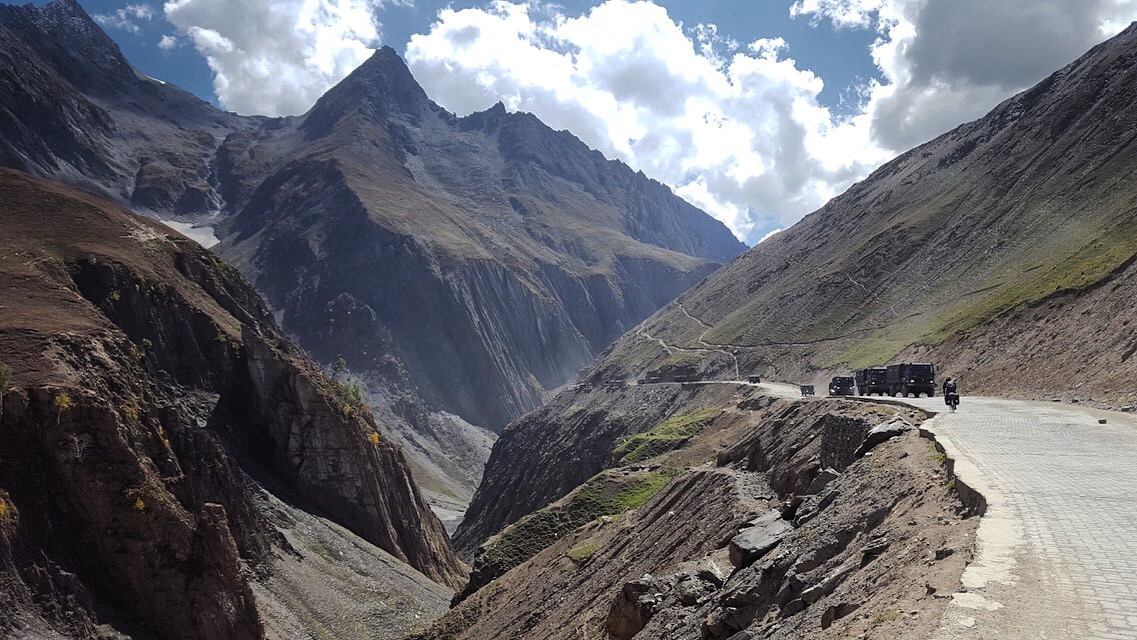 Descending from Zoji La, a rugged mountain pass, into the Kashmir Valley

Rules around hetero couples can be strict in India. Dating isn’t common outside of major cities; arranged marriages are the norm in many places. Public displays of affection between men and women are rare, unless you’re in certain corners of certain parks, where couples hide their touch. Since we were read as a straight couple by many, we were subject to some of these rules: many hotels would not allow Danny and I to stay in the same room because it was against “hotel policy” for an unmarried man and woman to be together. We were questioned by religious men, police, and curious strangers about our relation, and we were met with disbelief when we explained we were just friends. Most of the time, they’d accept our explanation: We were on a “special project” to see India by bicycle. In the town that rejected all our explanations, two teenage Indian adventurers came to our rescue at sunset. They rode motorbikes from hotel to hotel, talked to the managers, checked prices, and finally found a place that would take us.

“Constructs around coupling, marriage, and the why of it all are different in India, so for women to nurture relationships with other women, and for men to seek love from other men privately, wouldn’t surprise me.”

Some of the rules around coupling are understandable to me: marriage in India, especially when arranged, connects families, cultures, communities, and religious groups. It’s not exclusively a relationship between a couple. Because there is a sense of obligation within marriage, I rarely saw a husband and wife relying on each other the way that I do couples in the US. Married couples fulfill their obligations of raising children and caring for their families together. For the emotional turbulence of life, each partner is able to rely on huge extended networks of family, friends, elders, and religious ties to help them. Constructs around coupling, marriage, and the why of it all are different in India, so for women to nurture relationships with other women, and for men to seek love from other men privately, wouldn’t surprise me. 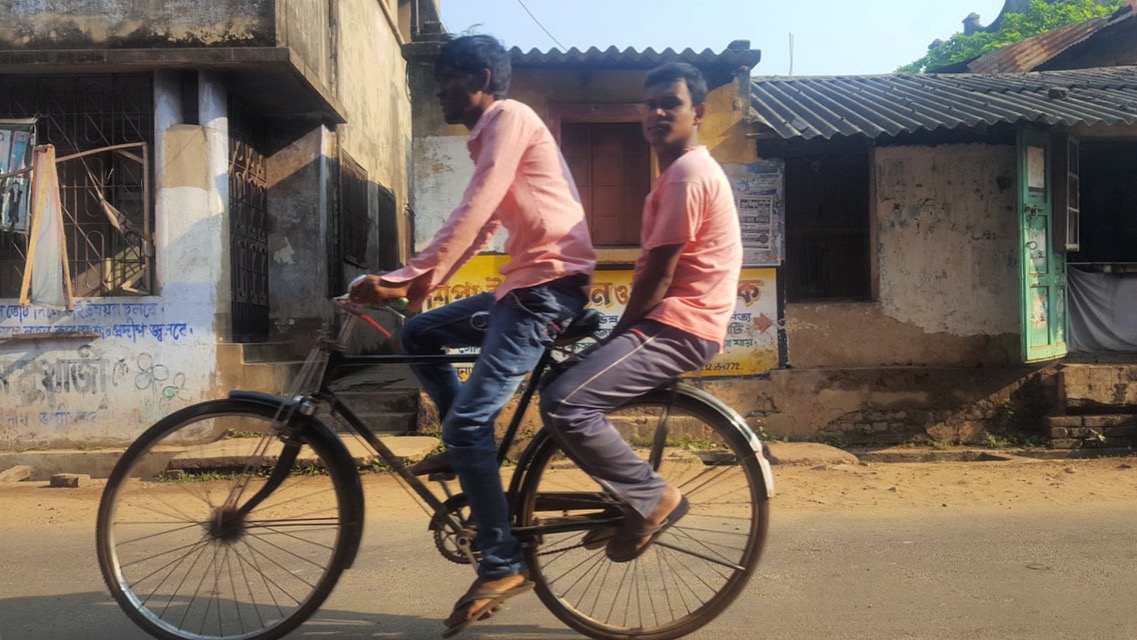 Bicycles proliferate West Bengal, one of my favorite states. Physical touch isn’t as stigmatized between men in India.

In this environment, Danny and I were both interested in how queers found each other. He downloaded Grindr, I downloaded Tinder, and a week of dates ensued. Grindr proved to be a source of information, a way to join strangers on a night out, and, of course, a means to hook up. While I was worried that there could be predators on the app, like people who were trying to trap gay men and violently enforce religious fundamentalism, Danny didn’t run into that at all.

For me, within a few hours of downloading Tinder, I had a date. She was studying abroad, but Chennai was home. We met up at a waffle café, where we shared an order of the most decadent waffles I’d ever eaten: chocolate syrup and chocolate ice cream saturated each crevice of the waffle with sweetness. We talked about our international travels, our experiences away from India, and what it was like to return. She told me that when she came out, she expected friends and family to be surprised, or to shame her. Instead, they expected it, she said. “I was the one surprised at how it was actually not a big deal at all.” 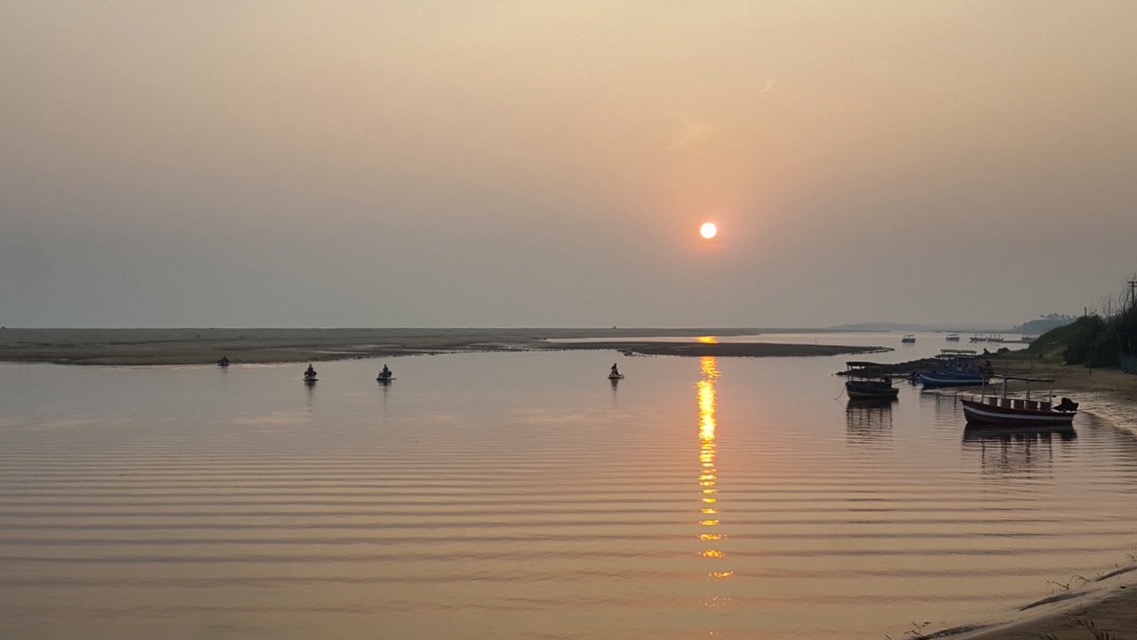 On a dinner date with an American ex-pat another night, I was told that queer women were motivated on Tinder in most of the major Indian cities. Compared to other countries, she found Indian women to be more responsive, engaged, and actively interested in going on dates. While queer culture isn’t out and proud with gayborhoods in every city, people seem to find each other covertly.

“That night, I texted her: ‘I don’t know who you’re interested in, but I’m leaving town in two days. I want to kiss you.’ She responded with a coy, ‘I’m curious.'”

Outside the apps, I ended up on a date with an Indian traveler who happened to be at the hostel I was staying in. She invited me out dancing with her friends and, since she put her hands on my waist, kept close all night, and had an asymmetrical haircut, I assumed she was queer. That night, I texted her: “I don’t know who you’re interested in, but I’m leaving town in two days. I want to kiss you.” She responded with a coy, “I’m curious.” 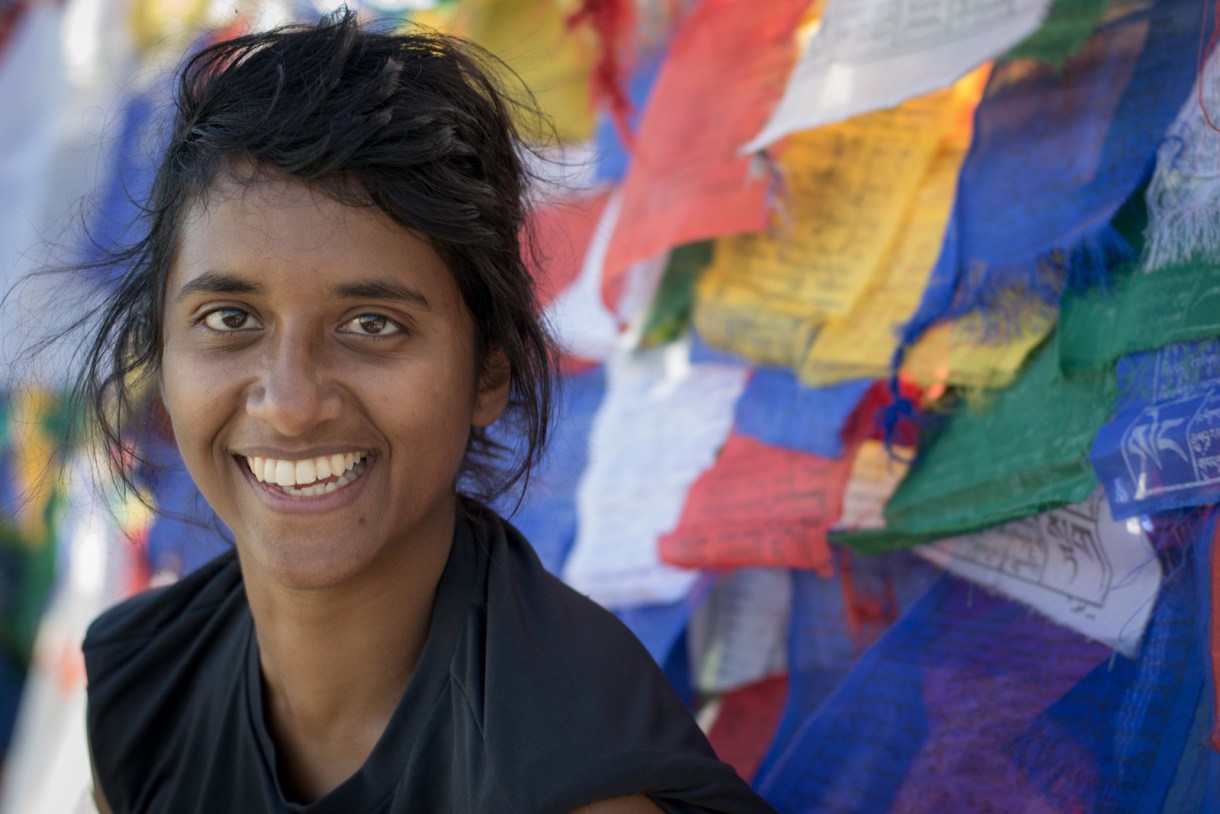 photo by Daniel Baylis, a photographer, writer & my travel partner

We met up the next day, ate pizza and talked about our pasts. She told me that she’d always wanted to be with a woman but had never had a chance. I told her I’d known I was queer since I was a teenager, but ended up in long-term monogamy with a dude, which only broke recently. She took us to her friend’s empty apartment, which she prearranged, where we made out with the lights on in sweltering heat. Lying in bed, she asked why I thought she’d be into women, and I tried to explain that Indian norms are full of moments Americans consider to be flirting, like sitting so close that your thighs and arms touch, dancing up on each other, and holding hands. “Holding hands doesn’t mean anything,” she said. “It must be so sad to not touch your friends.”

“There’s something beautiful about going to beaches where men lie in each other’s arms, walking around festivals where people of the same gender hold hands, and seeing young women drape their arms around each other.”

After four months in India, I had to agree. There’s something beautiful about going to beaches where men lie in each other’s arms, walking around festivals where people of the same gender hold hands, and seeing young women drape their arms around each other. There’s something sweet about an intimacy that reveals itself physically, about people being unafraid to show warmth through their bodies. As someone raised in New Jersey, where even shaking hands seems like too-intimate an act, India reminded me that the boundaries between our bodies are malleable, cultural. Physical love does not need to be bound up exclusively in sex; we can give and receive intimacy from friends and family.

The way I see it, relationships, friendships, and family structures are conceptualized really differently in India; as a result, there is room for queer folks. 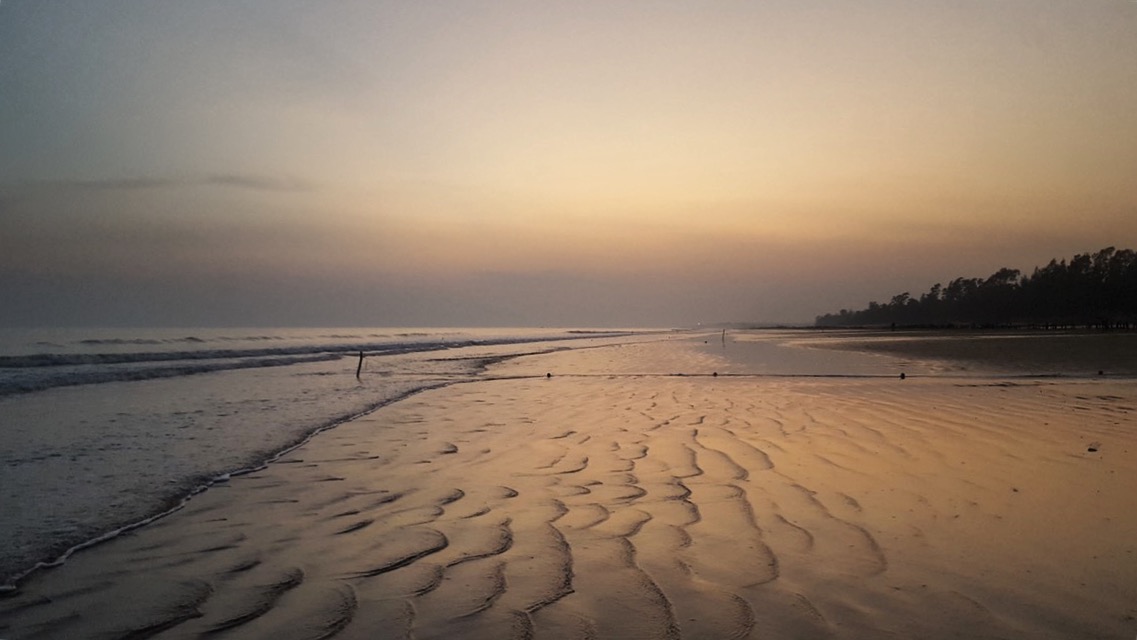 Beach along Bay of Bengal

Mat has written 11 articles for us.