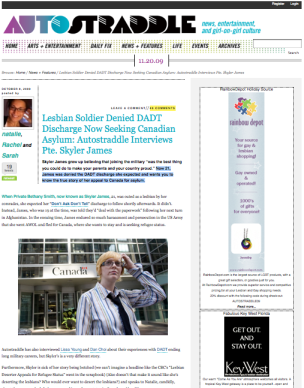 DADT: Back in October we interviewed Skyler James, formerly Bethany Smith, 21, who was outed as a lesbian by her comrades but denied the “Don’t Ask Don’t Tell” discharge she expected and instead was told they’d deal with the paperwork after her upcoming tour in Afghanistan. However she was threatened and harassed so much in the ensuing weeks (while serving at the Fort Campbell, Kentucky base where a gay soldier was beaten to death with a baseball bat in 1999) that she ultimately fled for Canada and appealed for refugee status as a “war resister. Smith feared she’d face a court martial if she returned to the U.S. and feared stiffer punishment because anti-gay sentiment persists in the military justice system. However she was rejected as a refugee by the Immigration and Refugee Board.

In her interview with Autostraddle she informed us of her current status:

At the moment, my case is being examined by another federal court judge; this judge is going to decide whether my case should be reviewed again by the IRB. If he says yes, then my case will go back to the IRB, and a different member will review it. If he says no, the deportation process effectively begins. A pre-removal risk assessment will be done, which attempts to assess the risk I face of persecution if I return to the US. My lawyer and I are submitting a humanitarian and compassionate considerations application, along with my application for permanent residence in Canada, friends and people I volunteer with are writing letters about why I should be allowed to stay, what an asset I am to the community and so on. Hopefully

In September, Federal lawyer Brian Harvey argued that it was not the job of the Canadian courts to interfere with American military justice and its treatment of deserters but it looks like her appeal was successful, because today Canada.com reports that James has “won a reprieve from deportation Friday in a Federal Court ruling that ordered the Immigration and Refugee Board to reconsider her failed asylum claim.” This just goes to show that if you interview with Autostraddle you will win at life.

Smith’s lawyer, Jamie Liew, recently told Canwest News Service that she knows of no lesbian or gay American soldier who has been granted refugee status in Canada or elsewhere based on sexual orientation.

SAME-SEX BENEFITS: A San Francisco judge rebuked the Obama administration for interfering with benefits for same-sex couples., asking them to “cease at once” with their interference of his decision to let Karen Golinski, a staff attourney at the court’s headquarters in San Francisco, enroll her wife, Amy Cunnnighis, in the family health plan that already covers their 6-year-old son.

According to The Chronicle, the Personnel Management people keep denying insurance benefits to gay couples, citing the Defense of Marriage Act. The appeals judge has ruled that the federal law should provide benefits to couples legally married in their home state, and the couple in question was married before Prop 8 passed. (@sfchronicle)

NY: A court ruled Thursday that gay couples married in other states are entitled to some marriage-related rights in New York. This might help out the same-sex marriage bill stalled in the New York legislature. (@ap) 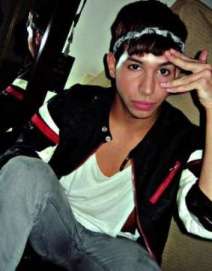 GAY PANIC: A Puerto Rican man accused of murdering Jorge Steven Lopez Mercado, a gay teen, will probably use “gay panic” as his defense in trial. That’s kind of like pleading temporary insanity, but with a twist. I don’t think gay panic is ever a legit defense, but I could see it being sort of within reason if he just hit the guy or something. But no, Mercado’s body was found “dismembered, beheaded and burned.” (@upi)

Cities around the country have organized a series of candlelight vigils in Mercado’s honor on Sunday.

DECLARATION: 150 conservative Christian leaders have a sign a declaration stating why they will continue to fight against abortion rights and same-sex marriage. They think it will lead to incest. They never give up on that argument, even though it makes no sense whatsoever. (@ap)

OPRAH: Oprah has decided to end her talk show in 2011 in favor of starting up a cable channel. Well, after that interview with Ellen & Portia, she has no more heights to reach, so this makes sense. (@nytimes)