I’ve been waffling about reviewing Barb & Star Go to Vista Del Mar, not because I didn’t enjoy it — in fact, it’s the first time I’ve turned my brain off and lost myself in what’s on my screen in forever — but because it’s a super straight movie. Well, mostly. There’s an absurd threesome, but it’s kind of a bonkers fluke. However, today is Straight People Day after all, and I honestly haven’t stopped thinking about this bananapants film or humming its ridiculous songs since I watched it the day it came out. So here we are and let me get this out of the way right away: Barb & Star is RIDICULOUS. It’s nonsensical and preposterous and silly and and senseless. It’s like spending 90 minutes inside a fever dream a Kristin Wiig ’80s sketch character might have if she got high inside some kind of Mars Cheese Castle/Dylan’s Candy Bar co-op. And I loved it. 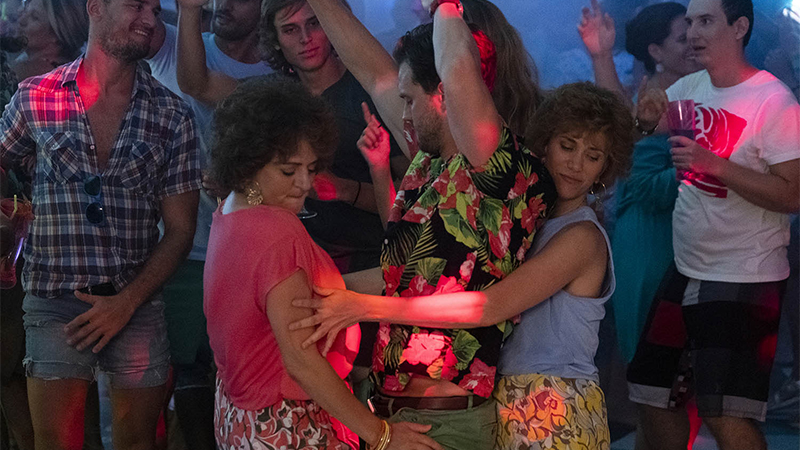 Kristin Wiig is Star and her real life BFF Annie Mumolo is Barb, a pair of perm-having, Chicos-wearing besties who work together at Jennifer Convertibles and live together because one is divorced and the other is a widow. When one of their friends comes back from Vista Del Mar, Florida raving about how its a paradise for horny middle-age Midwestern women, Barb and Star decide to take a vacation there too. They’re looking for men, and to have a good time, and also to visit the much-lauded 24-hour CVS — but what they stumble upon is much bigger than all that. Star finds love! Barb finds empowerment! And together they foil the evil plans of supervillain Sharon Gordon Fisherman (also played by Wiig), who wants to destroy Vista Del Mar with mosquitos!

That actually seems coherent when I type it all out like that, but the film is full of musical numbers, dances, ludicrous special effects, and some very kind Floridian friends who guide the girls on their journey to self-enlightenment, including a crab named Morgan Freemand. (Yes, Freemand with a D.) The music is surprisingly brilliant, including the hotel lounge singer Richard Cheese, whose song, “I Love Boobies,” is a hit with all the guests. 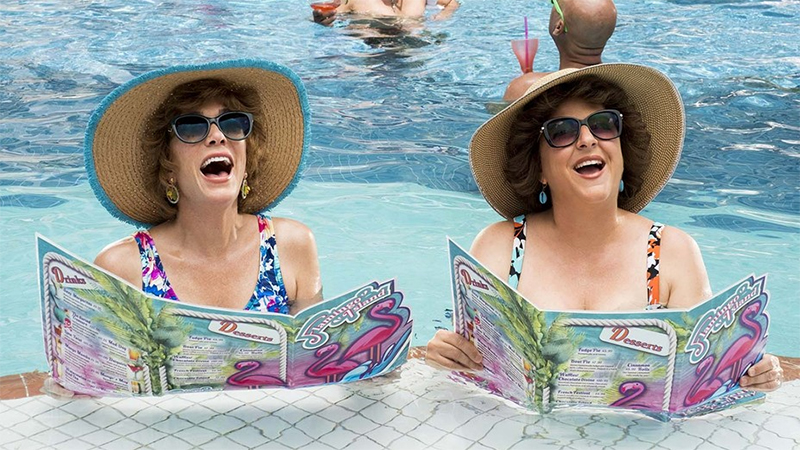 Barb & Star is ’80s in its cotton candy aesthetic, but it’s also ’80s in that its reminiscent of Leslie Nielsen and Mel Brooks movies and the zillion films they inspired (but without the almost ubiquitous homophobia that popped up in that decade’s silliness). The ’80s thing it reminded me of most, though, was Golden Girls, which is the highest compliment I could ever give any movie or TV show. Both Barb and Star are fully realized characters who have their own dreams and hang-ups and desires — and hallelujah for on-screen women over 30 with desires — but at the end of the day, their anchor is each other. They love each other, they support each other, they get each other, and their lives are better because of each other. They’re not in love but they have that kind of intimacy only women can have, and it’s so rare to see that, especially in women characters who aren’t teenagers, that I’m having to callback 35 years to compare it to something. (I suppose I could also compare it to Grace & Frankie, but I maintain that they are in love.)

The very best thing I can say about Barb & Star is I’d forgotten what it was like to turn on a movie or TV show and forget about everything else. It was only an hour-and-a-half brain-vacation, but dang, I needed it. Maybe you do too. We deserve it.