Investigations have begun into a number of UK schools identified as having homophobic sex and relationships education (SRE) policies reminiscent of Section 28, an infamous Thatcher-era law. Gay Star News first reported that it had found three schools with such policies, quickly updating it to eight within hours. The British Humanist Association (BHA) later identified 45 schools with SRE policies “that either replicate Section 28 of the Local Government Act 1988 or are unhelpfully vague on the issue.”

Some examples drawn from the BHA’s research include:

King James’s School: “The school will aim to: Ensure that homosexuality is not promoted as a pretended family relationship.”

The Bridge Academy: “Teachers will not engage in the promotion of any sexual orientation or sexual activity.”

Grace Academies Solihull, Coventry and Darlaston: “The Academy recognises the need to address the issue of homosexuality and the need to provide education related to the spread of HIV/AIDS which will, of necessity, include reference to homosexuals and bisexual behaviour.”

A Change.org petition directed at six of the implicated academies has since seen some success in having schools withdraw their outdated policies. Other schools, when approached by campaigners, reporters or MPs, characterised the problem as “administrative error” or “old policy” and have since done the same.

Not all schools have responded, however, and not all are likely to have simply “overlooked” this issue. 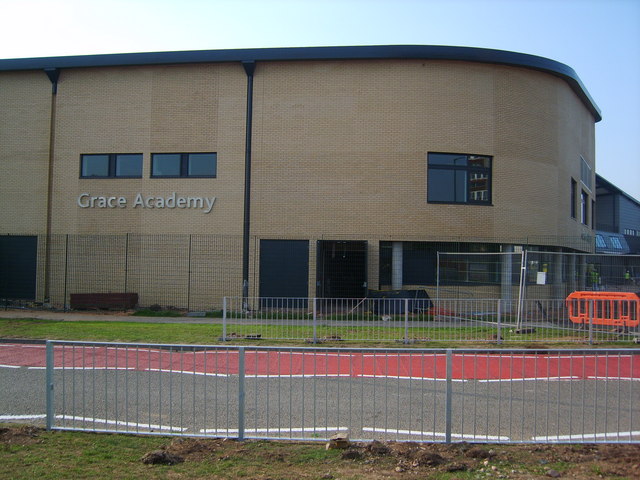 Grace Academy, one of the schools with an anti-gay SRE policy (via Gay Star News)

Section 28 of the Local Government Act 1988 declared that a local authority “shall not intentionally promote homosexuality or publish material with the intention of promoting homosexuality” or “promote the teaching in any maintained school of the acceptability of homosexuality as a pretended family relationship.” Schools complied by self-censoring their activities and syllabi.

The law was vigorously opposed by activists for more than a decade, defining an era that is broadly seen as the galvanising point for the modern UK LGBTQ movement and that included the founding of Stonewall, now the country’s largest LGB charity and lobbying group. Particularly key to these activists’ critique of Section 28 was its role in increasing homophobic bullying.

[…] a study by the Institute of Education at London University has found the clause created “an atmosphere of confusion and fear” that was discouraging staff from intervening to stop an epidemic of homophobic abuse in school playgrounds and corridors.

The problem was explored in in-depth confidential interviews with teachers. “Because they do not know how to comply with Section 28, they err on the side of caution. As a result, they choose to ignore homophobic harassment and bullying whenever possible. This creates a permissive environment in which pupils believe they can, and do, get away with it,” said Debbie Epstein who led the interviews. 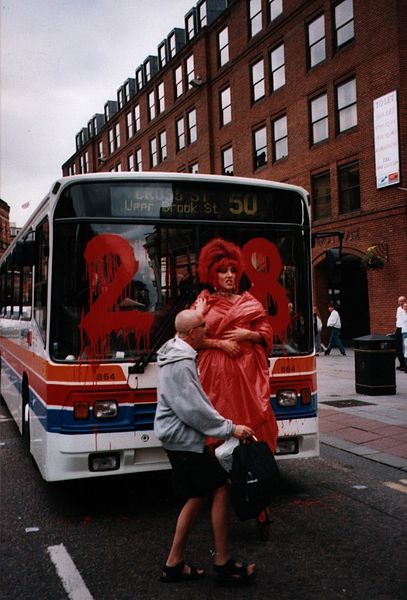 A drag queen in Manchester protesting against Stagecoach, whose owner publicly supported Section 28 (via Wikipedia)

With regard to the recent resurfacing of Section 28-like policies, Conservative Secretary of State for Education Michael Gove has yet to respond despite Labour Shadow Minister Stephen Twigg‘s recent call for action. “Michael Gove must intervene to ensure that all schools obey their duties under the Equality Act. It seems that some schools, perhaps not knowingly, are still using guidance from before Labour’s repeal of Section 28.” 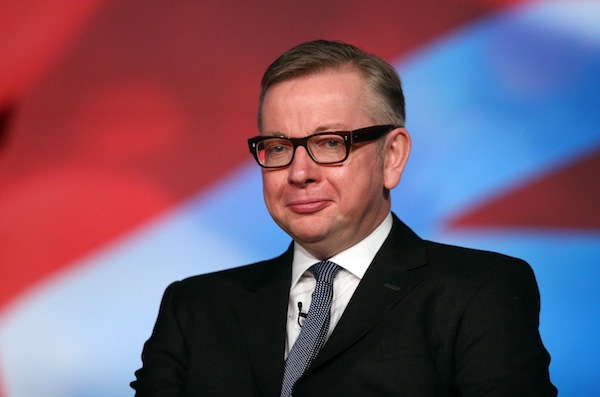 Michael Gove (via The Spectator)

Beyond the provisions of the Equality Act, however, the government’s hands are likely to be tied: while the DfE provides SRE guidance for schools, academies and Free Schools, there is no mandatory standardised sex education curriculum. In England, secondary schools are “required to provide an SRE programme which includes (as a minimum) information about sexually transmitted infections (STIs) and HIV/AIDS” but “other elements of personal, social and health education (PSHE), including SRE, are nonstatutory.” Primarily schools can opt out of providing SRE altogether outside of what is covered in science classes.

Furthermore, a disproportionate number of the schools identified with these anti-gay policies are Free Schools and academies, which, unlike community schools, are not controlled by local authorities. Free Schools were introduced by the current Liberal Democrat-Conservative coalition government in 2010, building on the previous Labour government’s Academies Programme. Maintaining the balance between oversight and flexibility for an increasing number of autonomous schools has been an ongoing debate in the UK for years. Organisations like the BHA are particularly concerned about the increasing number of faith-based schools, noting that the amount of control given to these schools could lead to them “teaching from an unshared, narrow perspective that is inappropriate to some pupils.”

Given the amount of attention these homophobic school policies have received in just a few days and the quick actions on the part of some schools, this issue could hopefully be resolved quickly. At the same time, this episode has revealed persistent and glaring cracks in the UK government’s broader education policies that compromise its ability to protect marginalised children, and these will take far longer to fix.