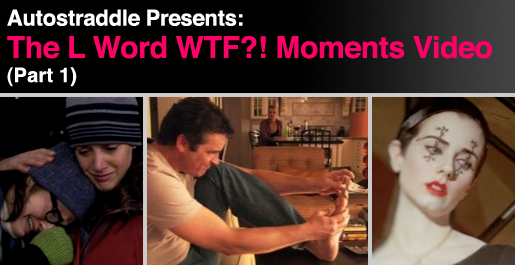 A few weeks ago while pounding away at the 608 Recap I had this brilliant idea to make a spectacular video encompassing every ridiculous WTF moment of TFS (this fucking show), The L Word. I described it with such enthusiasm “THE MUSIC BEGINS! And THEN! Bam!! -Max feels the baby kick BAM! – it’s Henry’s back fucking Tina – the music rises and BAM-BAM – The Nanny gives Angus a Blow Job BAM! Jenny with the paper dolls–” that I completely convinced myself it was the best idea I’d ever had. Now that I’ve actually begun this endless undertaking, I’m more on the fence. Anyhow.

Obviously there will be a part two, as one cannot get all the worst moments into one five minute piece. I put this video on a new vimeo account so if it gets taken down I won’t lose EVERYTHING! The art of losing is not hard to master, don’t forget that.

ALSO! Guess who went to the GLAAD Media Awards [Red Carpet]? Carlytron & Robin. Wanna read about it and see their pictures of all the famous homos smiling with their eyes? This is your chance! ALSO! Look at our L Word photo gallery, it’s hot.

WITHOUT ANY FURTHER ADO! WITNESS MY MASTERPIECE MY OPUS MY PRODIGAL SON ALL CAPS!