We started this contest with 64 couples: 32 canon couples and 32 fanon couples, each set among four regions. We went through six rounds of voting with thousands of folks weighing in. It was, technically, a contest between ships — and the fandoms showed up and showed out — but ultimately, it was an experiment…a way for us to figure out which brand of storytelling we found more palpable. Do we prefer canon couples and their stories, devised in writers’ rooms and beamed into our homes, or do we prefer being the captains of our own ‘ships, building on the those beamed-in stories and injecting queerness where television writers wouldn’t dare?

For the thousands of folks who voted in our Canon vs. Fanon finals, the answer is a unequivocally canon…and, in particular, the canon relationship of Waverly Earp and Nicole Haught of Wynonna Earp. 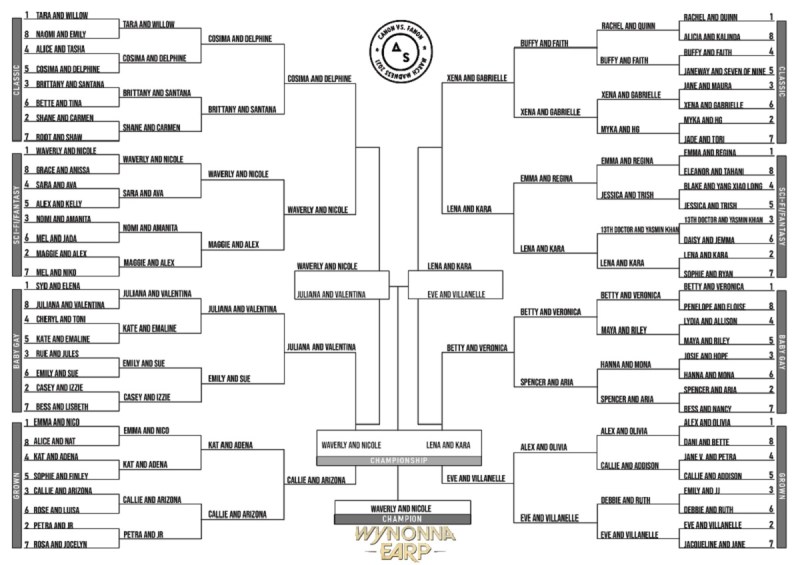 For the third year in a row, our March Madness champion is from a show that had — at least at the time — completed its run. In 2018, Everything Sucks won just after being cancelled by Netflix and the following year, Juliana Valdés of Amar a Muerte won after completing its run on Univision. This year, Waverly and Nicole take the top prize for Wynonna Earp just days after its final episode aired on SyFy. These contests become part of the fight…part of chains of emails, tweets and letters that seek to convince another network or another streaming service to carry these stories forward. But while Wynonna Earp‘s strong performance in March Madness might be partially driven by fan’s grief over losing the show…the real answer to why it won might lie in the original conceit for this contest: Canon vs. Fanon.

We take refuge in fanon because, too often, canon fails us. Shows tout their diversity but then regress back into the same habits that have kept queer stories marginalized for years. They center their straight characters and give their queer characters something to do every now and then. They give straight couples long love scenes with romantic montages and we get the blink and you missed it kiss. Writers craft beautiful coming out stories or love stories and then have absolutely no idea what to do with queer characters thereafter. And that is, of course, if you’re fortunate enough to have showrunners and writers who are brave enough — God, are we still doing this? — to go with the chemistry on the canvas.

Oh, and then there are the tropes. We’re someone’s best friend. We’re queer but without a single love interest in sight. We’re a crazy killer. We’re the duplicitous bisexual. We want kids above all other things. Or, worst of all, we become someone’s victim…dead before we can ever really have a life. 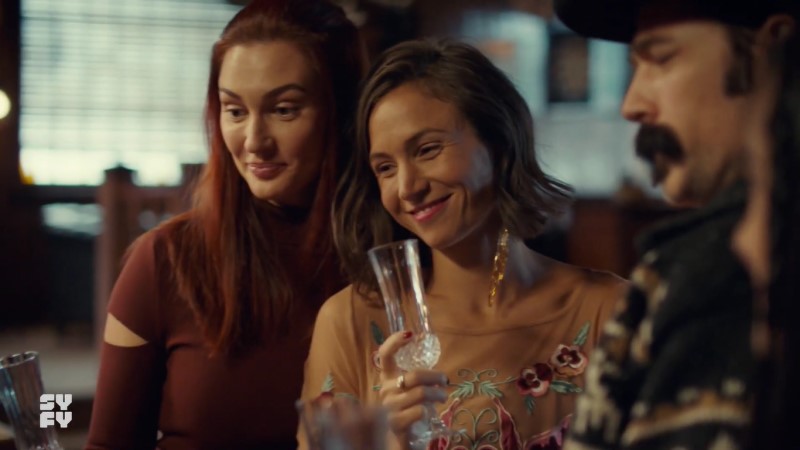 But, as I was reading Valerie Anne’s recap of Wynonna Earp‘s series finale, I was struck by this portion:

Wynonna Earp started in April 2016, less than a month after the Bury Your Gays trope came to a head with the death of Lexa kom Trikru on The 100. So many queer characters had died by the time that episode aired, and Lexa wasn’t even the last. But in the Season One finale of Wynonna Earp that June, Nicole Haught, resident lesbian, was shot but ultimately survived because she was wearing a bulletproof vest. It felt like a “fuck you” to the Bury Your Gays trope, which it was, but it also felt like a direct response to Lexa’s death, which it technically wasn’t. The episode was written and filmed before episode 307 of The 100 ever aired, which honestly makes it more special, in my opinion. Because Wynonna Earp was always going to do right by us, the timing of it was just a lucky coincidence.

It strikes me that, perhaps, Wynonna Earp is the anti-thesis of all those things that push us towards fanon. Maybe the reason its run in this competition was so successful was because Emily Andras studiously avoided the tropes that have doomed canon ships in the past and crafted two well-rounded characters. She told The Mary Sue, “If I had known I had eight seasons, I probably would’ve pushed the wedding a little later, probably would’ve found another reason to keep Wynonna and Doc around, but the wedding really felt like a gift to the fans who have supported us – including members of the LGBTQ community. It’s very rare for two gay characters, particularly women, to have a happy ending on TV. That was not something I was going to compromise on.”

Maybe they were the anti-fanon. Maybe Waverly and Nicole were the only couple who could’ve won this all along.

But also? I think it matters to be seen…literally. Maybe by seeing a chosen family and witnessing love triumph over everything, we can start imagining the possibility for ourselves…no matter where we are in the world. Canon is seen, not just by us — as fanon often exists within a bubble — but by our friends and families. Maybe they see Nicole and Waverly and see the things that you can’t yet bring yourself to say aloud. That matters. It matters a lot.

We incorporated a few facet in this year’s March Madness contest: a bracket competition. I was excited to bring one of my favorite facets of the NCAA tournament to our unique brand of Madness. We received 891 predictions — though not all those brackets were complete — and now we have our winner!

Congratulations to the bracket, aptly named “Canon Wins.” The winner picked the correct winners in 52 of March Madness’ 63 contests which is jaw dropping 82.5% correct. That’s considerably better than my paltry 62% so I guess I’ll stick to making TV brackets instead of predicting them. Congratulations, “Canon Wins:” bragging rights are yours and some Autostraddle swag is on the way!