Did you watch last night’s WNBA Draft? It’s amazing to me to think that just a little over a week ago, we watched South Carolina and UCONN face-off for the national championship game and now, some of the stars from that game — Christyn Williams, Destanni Henderson, Olivia Nelson-Ododa and Evina Westbrook — have the destinations set for the next step of their playing careers.

For me, the WNBA Draft is always a mixed bag: there’s the joy, of course. I cheered so loud when I heard Elissa Cunane — the (apparently) underappreciated center from my alma mater — get her name called by the WNBA Commissioner, you’d think I was the one who got drafted to play along Sue Bird on an automatic title contender. Then when another NC State alum, Kayla Jones, got picked 22nd by Minnesota, I couldn’t wipe the grin off my face for the rest of the night. I was so happy for them both.

But soon after all the names are called and you’ve enjoyed fawning over everyone’s Draft Day fits, the reality sets in: there are just too many talented players and not enough roster spots for them. Far too many of the players who heard their names called last night won’t make it onto a WNBA roster. According to On Her Turf’s Alex Azzi, last year “16 of 36 draftees were waived before the season began, and an additional six were waived or released shortly after the season started.” Because of the dearth of roster slots, according to the NCAA, only 0.8% of draft eligible women’s basketball players will make the jump to the professional ranks. The rosters need to expand — the MNBA has 15 players on their roster, the WNBA only allows for 12 — and the league needs to expand.

We need a WNBA team in the Bay.

We need a WNBA team in the Six.

We need a WNBA team in Music City.

We need to bring back the Charlotte Sting with its former point guard as the new head coach/GM.

For now, though…this is what we’ve got.

The first few picks of the draft went as expected: Rhyne Howard to Atlanta, NaLyssa Smith to Indiana, Shakira Austin to Washington and Emily Engstler to Indiana. Heather got her wish and got her own Sabally to cheer for as Nyara Sabally — the younger sister of Dallas Wings standout, Satou Sabally — got drafted to the New York Liberty.

Then things started to get weird. I thought the changing of the guard in Indiana meant that we’d see more stable Draft Day from the Fever, but nope…Lin Dunn set fire to every mock draft I’d seen and picked Lexie Hull and Queen Egbo — both expected to be late second rounders — in the first round.

At this stage, it’s hard to think of any loss or defeat in the Final Four as an upset — these competitors have made it through so much — but I’ll admit, I’m a little surprised by the results from the Final Four.

I wasn’t surprised that Waverly Earp took down Emily Dickinson in their semifinal match-up — she’s the better half of the defending champions, after all — but I was surprised by the final spread. After Emily took out Maya Bishop of Station 19 and Casey Gardner from Atypical, I thought she’d be a more formidable foe for Waverly but the Earpers were not going to let their better half go down.

But before you go penciling Waverly in as the champion of March Madness, consider this: she got fewer overall votes than both competitors in the second semifinal.

This was one of those contests where I feel bad that one of the competitors had to lose: on the one hand, you had a fandom trumpeting Sophie Moore — the longest running queer character on Batwoman — and this contest became one way fans could show support for the #RenewBatwoman campaign. On the other hand, you had #Marina fans, who despite the understandable frustration they feel about the couple’s current storyline, still came out to support their favorite Station 19 character. Both the #WildMoore and #Marina fandoms came play on behalf of their favorite ships.

Votes would come in like waves — the first pushing Carina into the lead, the second giving Sophie the lead — and they just kept coming. I imagine, if the vote had gone on for a few more hours, another wave of votes would’ve come in, changing the outcome but in the end, it’s Carina DeLuca who advances to the championship round.

So that’s it, our final is set. Waverly Earp vs. Carina DeLuca.

It’s kind of crazy — when you think about the progression of queer storytelling on television — that at the end of this competition, we’ve ended up with the better halves of two marriage couples. It was so improbable just a decade ago and now, we have these two wives competing for our championship. And maybe that’s why Waverly and Carina are here…because a wedding means that we’ve seen those relationships (and these characters) grow across multiple episodes and multiple seasons. We’ve seen them rebound from heartbreak and piece themselves and their future wives back together.

So, just in case you need some help deciding who to vote for, take a moment to relive the #WayHaught and #Marina weddings. As usual, the voting will go on for 48 hours and then we’ll be back here on Thursday to crown our BETTER HALVES Champion! 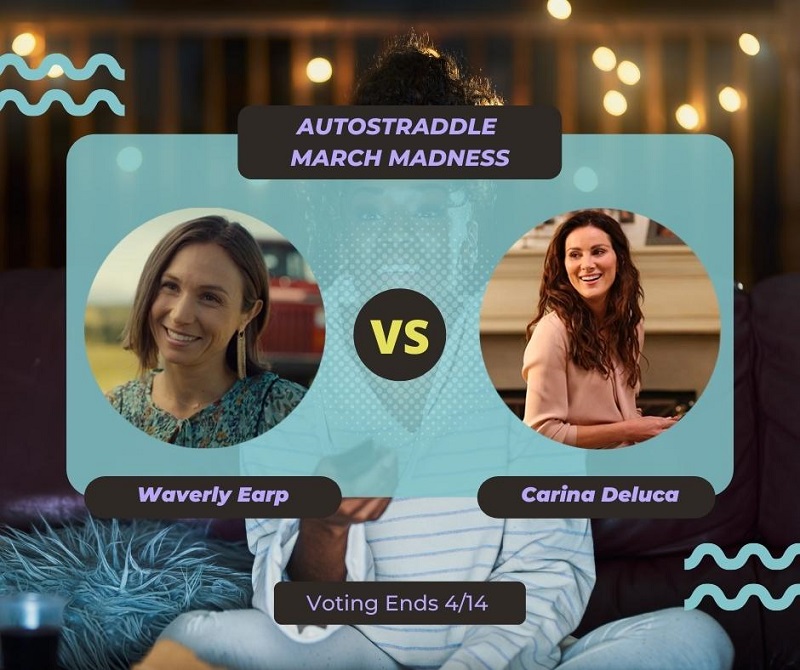