Hello little hashbrowns. It’s time for Autostraddle to hit the road again! This time we’re not going to a lady-mecca to reflect on our past, we’re going out into the wide world to examine our big, bright future. This Thursday, June 16, I’m leaving on a jetplane (or like, maybe hitchhiking at this point, who knows) for Minneapolis, MN to attend Netroots Nation 2011.

I'm not sure if she's dressed properly for Minnesota

Netroots Nation is a yearly conference established with the intention of amplifying the already-present voices of the progressive community online. Founded in 2006 by liberal political blog DailyKos, Netroots recognizes the online community and the legitimacy of its influence on national politics.

Originally called YearlyKos, Netroots changed its name in 2008 to reflect the influence that grassroots organizations could harness through blogs, wikis, and social networks. Recognizing the power that leftist media sites wielded individually, it soon became clear that we could build a movement collectively, if only we could realize a common struggle – as well as a common means of communication. Keynote speakers have included Bill Clinton, Nancy Pelosi and Al Franken.

It’s hard to define what the common struggle of the American Left is. And this is a message that becomes clear when looking at the agenda for Netroots. While a good number of workshops have a tendency to either be reflections on liberal media or an examination of labor/union issues, there are also a number of panels on the LGBT movement, reproductive rights, religion, the Middle East, and baseball. 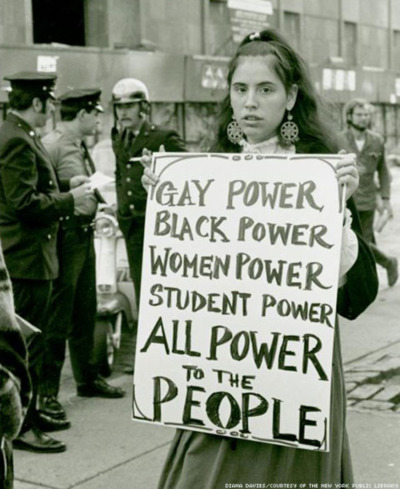 Relevant to our interests

And so I suppose what we have in common when it comes down to the very essentials is a fervent need for social justice. We want to believe that things can be fair and correct, that we can treat each other properly, and that these things can and should not be taken away or prohibited by any sort of legislation. And we’re recognizing this. We’re recognizing that, although our focuses may be different, we’re all a part of this community. We want to help each other help ourselves.We know that there’s nothing more powerful than information, discourse, and the exchanging of ideas and passions. And we know that it’s more powerful still because it’s free and available.

How this all plays out in a physical space is yet to be discovered. Maybe I’m too idealistic. Maybe I should just grow out my hair and start a food collective or go start a lesbian colony with Santana in Tribeca.

This year’s conference is being touted as ‘the most concentrated gathering of progressive bloggers to date.’ And we’re going to be a part of it. That’s us! As a generation of activists/generally open-minded people growing up online, we’re finding that it’s not just ideas that are accessible to us, it’s power and movement and community. We’re looking at ourselves as part of a larger progressive cause, because we’re worth that, you know? And we’re seeing that these causes are struggling right along with us.

LGBT rights are becoming part of a national dialogue. It becomes more apparent with each day, with each passing news story we post on here. We are politics. We’re activists, artists, and thinkers. We don’t just listen to lectures about our world, we have conversations about it, and often, we start those conversations online.

This thing that we’re doing? It’s a Real Thing, and we want to talk about it. 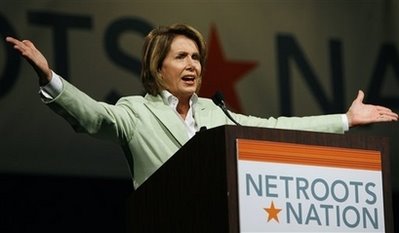 Look at all the Fucks 2008 Speaker Nancy Pelosi Gives

The workshop I’m participating in is called Queer Media and the Alternative Revolution, assembled by Zack Rosen of The New Gay and also featuring Heidi Barton Stink, a trans* rapper, and David Castillo of The Bilerico Project. And while my secret goal is to form a pop-sensational, ultra-queer, boi band supergroup, we’re mostly going to examine the media’s relationship with the queer community. We’ll be discussing what alternative means to us, the movement of queer culture online, and the relationship between culture and politics. Other prominent queer bloggers like Pam Spaulding will be on panels as well.

So it’s time to suit up/lace up/strap onand hit the road to revolution/adventure. I’ve got my firm, confident lesbian handshake ready (if you know what I’m saying), and I’m excited for what this can become. Perhaps hilarity will ensue. Perhaps we’ll shed a few tears. I don’t know exactly what to expect, but I know I’m ready to find out.