Note: The original version of this article published the wrong numbers for state votes. This has now been rectified. Also, one of the interviewees requested a change in name.

Amidst clouds of confetti, colored powder and cheering, Australians have overwhelmingly voted Yes to marriage equality.

The results of the marriage equality plebiscite, announced live by the Australian Bureau of Statistics on 15 November, showed that over 7.8 million Australians, or 61.6% of those who sent in their ballot, voted Yes. Every state and territory, including 133 of 150 Federal Electoral Divisions, held a majority Yes vote; the Australian Capital Territory recorded the highest, with 74% voting Yes (Victoria came a close second, with 64.9%). Around 79.5% of eligible Australians voted in the plebiscite. Women were more likely to vote than men, and those between 70 to 74 years old were the most likely to vote across age groups. The 18 to 19 age group, the youngest group of eligible Australian voters, were the most participatory amongst those under 45.

Australians by and large have been extremely celebratory of the result. “Today is an enormous relief, a great achievement for all Australians,” says Julie Tsinaris, a gay woman who works in security in Melbourne. Tsinaris was sad that the “love of [her] life”, who passed on 12 years ago, was not able to witness the result, “but I can feel her spirit. She would have loved this.”

AUSTRALIA VOTED YES TO SAME SEX MARRIAGE! MELBOURNE, Australia — A solid majority of Australians voted in favor of same-sex marriage in a historic survey that, while not binding, paves the way for Parliament to legally recognize the unions of gay and lesbian couples. Of 12.7 million Australians who took part in the survey, 61.6 percent voted yes and 38.4 percent voted no, officials announced on Wednesday morning. Participation was high, with 79.5 percent of voting-age Australians taking part. “The Australian people have spoken, and they have voted overwhelmingly ‘yes’ for marriage equality,” said Prime Minister Malcolm Turnbull, who had called the national survey as a way to put pressure on conservative lawmakers, many from his own party. “They voted ‘yes’ for fairness, they voted ‘yes’ for commitment, they voted ‘yes’ for love.” #australiavoteyes #australia #loveislove #loveislove🌈 #lovewins #lovewins🌈 #LGBT #lgbtq #lgbtqia #marriageequality #equality #equalityforall

Ali Hogg, the convener of the Equal Love campaign that has fought for marriage equality since then-Prime Minister John Howard changed the Marriage Act in 2004 to only allow marriages between a man and a woman, is elated by the result. “It was so overwhelmingly a majority that it’s going to warn the Government that they cannot get away with discrimination,” she said.

Lesbian and student Hien Nguyen, while excited about the result, doesn’t feel like it was enough of a majority. “Only 61% voted Yes – that’s nowhere near enough,” she said. “It should have been 80%!”.

The voluntary non-binding vote, held via the Australian postal service from 12 September to 7 November 2017, has been the source of much controversy since before the July 2016 Federal Election, when the right-wing Coalition Government headed by Australian Liberal Party head Malcolm Turnbull promised a compulsory plebiscite on the legalization of same-sex marriage. Even members of Turnbull’s party were getting tired with the whole debacle, with senior frontbencher Christopher Pyne and senator Dean Smith publicly stating support for marriage equality. Legislation for the plebiscite bounced between the House and the Senate a few times until 9 August 2017, when the motion to discuss the plebiscite in the Senate was tied 31-31, resulting in defeat.

This defeat spurred the Government to go through the Australian Bureau of Statistics to survey every Australian on the electoral roll, arguing that there was no special legislation needed for this as it was already covered under laws governing ABS. This too was controversial, particularly due to its AU$122 million (over US$93.35 million) cost to Australian taxpayers (the issue had previously been allocated AU$160 million in the Budget). The Australian High Court heard two challenges against the postal plebiscite on the 7th of September, which gave some hope to LGBTQIA activists across Australia; unfortunately for us, the High Court ruled that the plebiscite was valid.

The marriage equality plebiscite has had both positive and negative outcomes. A record 98,000 people added their names to the Australian electoral roll primarily due to the plebiscite, most of whom are young people, women, and inner-city residents – tending to be friendly towards marriage equality. However, the LGBTQIA community has also had to deal with a significant wave of homophobic and transphobic messaging from the anti-marriage equality side, much of which didn’t actually target marriage equality specifically but went after the Safe Schools program, which provides LGBTQIA-related education and resources in Australian schools, as well as trans people, with charming comments such as political commentator Mark Latham’s claim that he “supports gay marriage but not state-approved gender fluidity”. (It’s worth noting that under current law in most Australian states, married trans people need to be divorced before they can have their sex recorded on their birth certificate.)

People on the YES side have worked furiously to counteract the NO side’s messaging, through regular events and rallies as well as grassroots marketing campaigns of their own. Melbourne-based jazz singer, cabaret artist, and community activist Mama Alto, a non-binary trans femme of colour who was recently recognised as Artist of the Year at the GLOBE Community Awards, has been documenting YES-side campaign art and posters around Melbourne, sharing it with her thousands of followers and friends on social media. 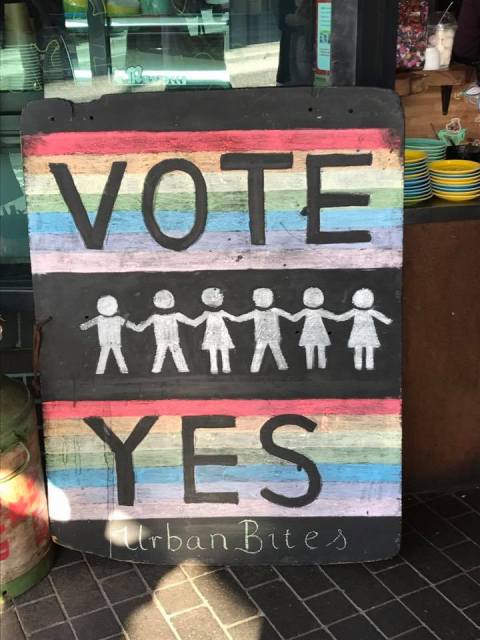 “I wanted to both capture the beautiful expressions of love, support and community, and also post these images online to spread hope and positivity,” she says, aiming to provide “a little beacon of hope” to those feeling overwhelmed and isolated by the extra focus by mainstream and social media on the NO campaign. She’s received positive feedback from people who say that after dealing with rough days of negativity and invalidation, “randomly coming across these quiet but powerful supportive statements that are out in the community can help them keep their head above water”.

Mama Alto notes that she’s primarily “amplify[ing] the hope and love that’s already out there”, but every little bit can help. “I know personally, as someone who experiences terrible mental health issues, sometimes you need things to cling to. Little lights in the darkness. They can turn your day around, or they can help you keep your head above water and survive for one more moment. And when your community is under siege, sometimes that’s all you can do: take it moment by moment.”

Even with the fervent YES campaigning and increased enrollment, there were still concerns leading up to the announcement about the results. An early November study by Griffith University in Brisbane, using similar data analysis methods that led to the prediction of Donald Trump as winner of the 2016 US Election, showed a narrow win for the No vote. Early reports of dumped voting envelopes and privacy concerns have also cast doubt on the validity of the survey results.

Even a Yes vote is not a guarantee. While Turnbull (who publicly urged Australians to vote Yes, much to the consternation of LGBTQIA Australians who don’t understand why he still wanted to push a plebiscite through instead of just legalising marriage equality already) has stated that a Yes vote will lead to marriage equality by Christmas, the non-binding voluntary nature of the vote means that the results would still be subject to much criticism, especially since there hasn’t been enough information on what percentage would count as ‘legitimate’. Indeed, former Prime Minister Tony Abbott has suggested that the anti-marriage equality campaign should keep going even after the vote is over, suggesting more traumatic times for Australia’s LGBTQIA community.

A couple of draft same-sex marriage bills have already been proposed by Liberal members Dean Smith and James Patterson. While both bills include provisions for “religious exemptions”, Patterson’s bill has come under immense scrutiny for provisions that would severely roll back anti-discrimination protections, including those unrelated to marriage, such as parents being given the right to pull their children out of Safe Schools programs in schools. In response to these bills, Hogg said that Equal Love will push the Greens, Labor, and independent Members of Parliament to call for amendments to Smith’s bill, calling any form of discrimination in the guise of religious freedom “despicable”.

While Australia celebrates a long-awaited victory, many are aware that this is not the end. “We can’t assume this is the end,” said one queer student I spoke with, to the agreement of many others.

“Marriage is one thing – it’s just the tip of the iceberg of true equality,” says Fairy, bringing up trans people, intersex people, Indigenous people, and people of color. “It isn’t over yet.”