32-year-old Orashia Edwards, a bisexual man and long-term resident of Leeds, was denied asylum yesterday by the UK Home Office as Judge Clive Heaton QC declared that Edwards was being “dishonest” about his sexuality. No justification was given for this verdict, but Edwards has a 14-month-old child in the UK and has expressed frustration at the assumption that he could “fit in” with straight people in Jamaica.

Edwards was scheduled to be deported this morning but his flight was cancelled at the last minute. While this has granted him temporary reprieve, his future remains uncertain; without refugee status, Edwards could still be detained and/or deported at any time. He has no family in Jamaica and is likely to face violence and discrimination on the basis of his sexual orientation and now public persona. 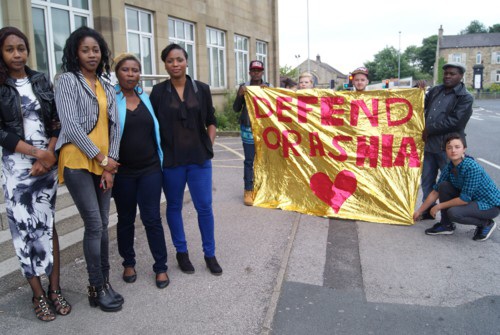 Edwards’ relatives and supporters in Leeds, UK
via Yorkshire Standard

The failures of the UK immigration system to protect vulnerable LGBT asylum seekers from persecution are well-documented: LGBT asylum claims have a 98-99% failure rate (compared to 73% for claims in general), some asylum seekers have been driven or coerced to go as far as submitting home sex tapes to “prove” their sexuality, and Yarl’s Wood Detention Centre in particular has come under scrutiny for abuses committed against women asylum seekers. The Home Office denies that it is biased, though Home Secretary Theresa May called for a review of officers’ handling of asylum claims made by gay and lesbian applicants earlier this year. This review has yet to materialise.

Edwards’ case, however, highlights the specific concerns bisexual asylum seekers face at the border. While the European Court of Justice (ECJ) has ruled that LGB asylum seekers cannot simply be told to go home and “be discreet,” the difficulties of “proving” one’s sexuality remain as difficult as ever — if not even more so now — in a climate of institutionalized disbelief and public scaremongering about “illegal immigrants” and “fradulent asylum claims.” The dominance of assumptions of binary monosexuality and the “born this way” narrative, assessing the legitimacy of asylum seekers’ sexual orientation based on their sexual behaviour and relationship history, and disproportionately white, male and straight judges mean that bisexual people are far less likely to pass the “gay enough” test to qualify for asylum.

In January, Colin Yeo of the Free Movement blog revealed questions posed by immigration officers to a bisexual asylum seeker in detention.

What did you do with x?
Did you do anything other than kissing x?
Where did this happen?
How often did you have intercourse together?
Is that every day?
Did you put your penis into x’s backside?
When x was penetrating you did you have an erection?
Did you ejaculate?
Did x ejaculate inside you?
Why did you use a condom?
How do you show your sexuality when you are in the UK?
How does that display you are bisexual?
Why have you got to behave as a bisexual in [country]?
That was with x only and he initiated the contact you claim. Why can’t you return and live a full life there?

Can we really expect the UK Home Office to believe the stories of bisexual asylum seekers (and others who deviate from expected gay narratives, including those who came out later in life and asexual people) when gay activism and media coverage often replicate similar dynamics of biphobia and bi invisibility? Non-monosexual asylum seekers are not only interrogated on their sexual and relationship histories but are expected to “display” their sexuality in rigid, restricted ways even while in the UK, when it is exactly scrutiny of their sexual orientation and lives that they are escaping. At the intersections of biphobia and sexism, queer women, who often experience different forms of violence and discrimination (particularly with regard to domestic and sexual violence) and are more likely to have been married to men before or to bring children with them into the country, are especially vulnerable to being dismissed by the Home Office. 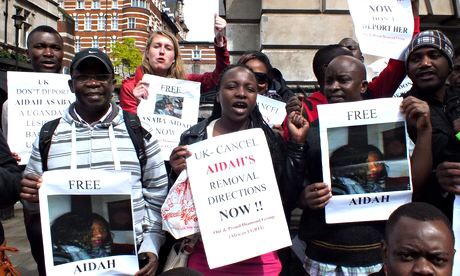 Activists rallied in May in support of Aidah Asaba, a Ugandan woman whose asylum application failed because courts did not believe she was a lesbian, with her having been married to an abusive male partner
via The Guardian

Edwards is being supported by his family and immigration justice groups Leeds for Change and No Borders Leeds. There has been an online petition directed at the Home Office to keep him here, a fundraiser for his legal fees, and the hashtag #DefendOrashia to keep track of updates on his case.

The fate of LGB asylum seekers, Edwards included, cannot be contingent on fickle media attention and Twitter mentions. Without a more comprehensive overhaul of the asylum system — and an acknowledgement of and move to redress the wider queer community’s complicity in biphobia and bi invisiblity — vulnerable people will continue to be sentenced to the very real risk of violence and harm.