When I was younger, my great-great aunt gave me a set of prayer cards and I loved them. The hazy colors, the open hands, the distant stares and mysterious plants. I loved them so much I refused to trade my Saint Andrew to my cousin until he offered up the entire pitching staff of the 1999 Atlanta Braves. So I was jolted, fourteen years later, after spending the day getting lost and art-fatigued in a warren of open studios, to find myself face-to-timeless-face with Ria Brodell’s work. I wish I’d had it hanging in my church, when I was conflating St. Peter with Peter Pan, and dreaming of flying up and watching communion from a perch in the rafters. I probably would have prayed a lot more, to be honest. 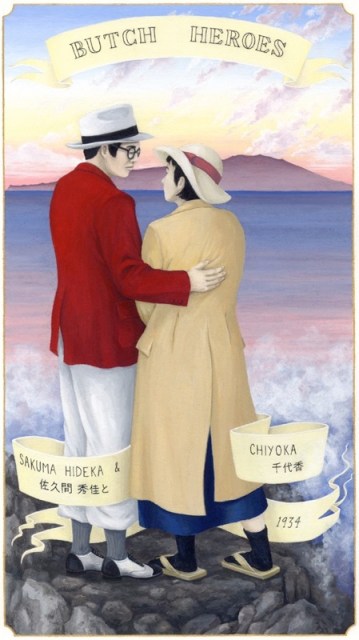 Ria Brodell is a Boston-area artist and a self-described “culturally Catholic genderqueer.” For an ongoing project called Butch Heroes, she paints historical figures that fit a certain set of criteria —”women living outside traditional gender roles, potential FTM’s, in relationships with women” — in the style of those Catholic prayer cards, with gouache paint, on 11×7 pieces of paper. She was inspired to do this after an earlier project made her wonder “what my fate would have been as a gender queer homo in say, the Middle Ages or the 17th century.  I knew that we must have gotten by in some way or another and I wanted to find out how.” In the process she hopes to uncover a history that remains mostly hidden, and to fan out a pantheon of role models. 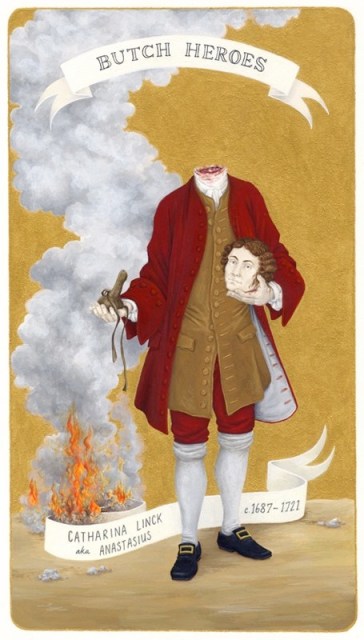 The result is a meticulously and beautifully rendered series of portraits of very brave people. Many are painted facing martyrdom (or having just faced it). Some are surrounded by the society that misunderstood them. All are imbued with dizzying layers of history and symbolism and emotion and artistic choice. Short narratives on Brodell’s website provide some backstory, and may eventually be incorporated into reproductions of the cards (there are also plans for a book, which would go immediately onto my coffee table without passing Go).

Juxtaposed with the art, the stories can add humor — Catterina Vizzani aka Giovanni Bordoni, an 18th century Italian, worked for a vicar who complained of his tendency to “incessantly follow the Wenches,” which may explain the small smirk I see at the corner of their mouth. Or they can increase pathos, as when you find out that Lisbetha Olsdotter aka Mats Ersson, a 17th century Swedish soldier, was beheaded for, among other things, “taking a profession she was not capable of performing.” The paintings get so much across on their own, though. Just look at Frank Blunt, encircled by men with reproachful moustaches — but also, and more closely, by a halo of light, and by his lover’s arms. Or Bordoni, waistcoat unbuttoned, holding a tray of his own entrails. And you don’t need to know exactly who Rosa Bonheur was, or what she did, in order to understand, looking at her, that she somehow grew her own horns. 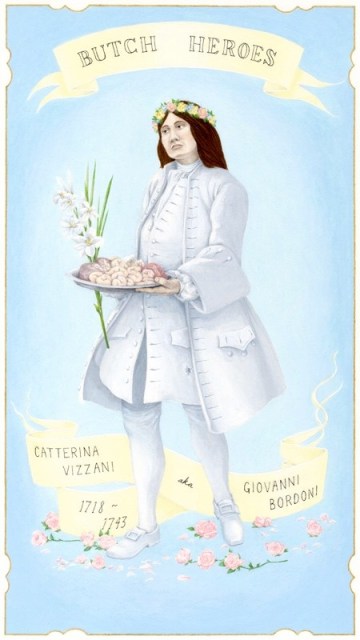 Before Brodell can put brush to paper, she has to do a lot of historical detective work, exhausting the LGBTQ sections of libraries and scouring newspaper records and old crime logs. Many of her subjects didn’t use modern terms, so this involves some gap-leaping, and some reading between the lines. When Brodell comes across a person who appears to fit the bill, she takes pains to verify their story, as she’s likely one of the first to try to portray it in any comprehensive way. And she tries to draw from the broadest possible map and timeline — she’s journeyed everywhere from 15th century Germany to 1930s Japan — so each empty card means starting over. It works out so that “the actual painting itself often takes less time than the preparation.”

As in traditional prayer cards, Brodell’s heroes are surrounded by contextual clues, “subtle symbols that will give the viewer a hint of the time, place or circumstances of the person I’m trying to represent.” Finding these means further study. Research for “Biawacheeitche or Woman Chief aka Barcheeampe or Pine Leaf” found Brodell peering into glass cases at the Peabody Essex Museum. Working on Helen Oliver aka John Oliver, an 19th century Scottish journeyman, meant she spent an unusual amount of time “watching videos about plastering on YouTube.” It pays off, of course. As anyone who has spent large amounts of time studying any one person or thing will tell you, that kind of attention is a form of prayer. In rediscovering these heroes, Brodell has canonized them, and given the rest of us the chance to do the same. 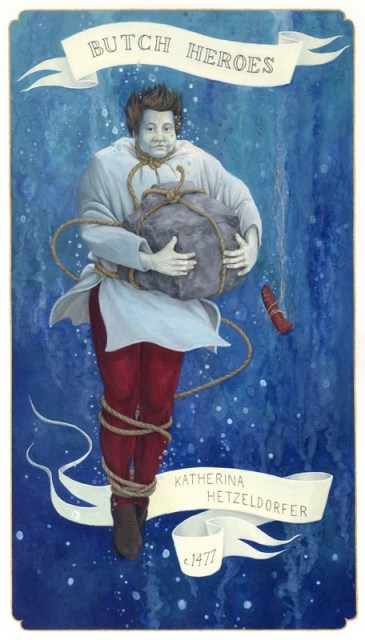