From the protest songs of the 1960s, to political murals, to Ayn Rand novels or Brecht plays, art has a long history of being used in the service of politics. After all, couching one’s message in the form of a beautiful melody or breathtaking prose can help it to reach people who would be turned off by a straightforward speech. Yet, the message can also be diluted by the artistry — and vice versa. What is a “serious artist” who also cares about politics to do? Certainly, we are more than entitled to our opinions on political issues, but is our art the proper place to express them? As a composer and writer, it is a question I often ask myself, and I doubt I’m alone.

In his March opinion piece for the New York Times (which you should read), composer David T. Little examines these issues and more that trouble the “political artist.” Historically, he points out, art in the form of propaganda posters and anthems was used by totalitarian regimes to spread their hateful ideas and practices — and therefore, it was the “pre-emptive duty” of artists opposed to such regimes to engage in their own political posturing. “[P]olitical composers believed that since politics was going to concern itself with art — (as Hitler and Stalin proved) — art had better concern itself with politics.” Yet, not all political art need be message-oriented. Little feels that merely observing and commenting on politics, rather than explicit advocacy, is actually the preferable approach for modern artists:

[M]y reasons, approach, and techniques are different, because this historical moment is different. We are no longer amidst a social(ist) revolution in the United States (despite what the Tea Party says) and as such music with a strong ideological or revolutionary message can often feel out of place or out of touch. As a result, political composers are no longer the revolutionaries we once were. Instead, we function as critics.

While I think Little is on-target when it comes to the issues he mentions — we don’t need a modern “Internationale” — the fact that is that we do have other revolutions occurring at this particular historical moment. Mainly, the revolution in the political rights of and cultural attitudes toward LGBT people. Studies have shown that “knowing” gay fictional characters is similar to knowing a gay person when it comes to affecting attitudes toward LGBT people and issues. Artists with a wide audience, such as the people behind popular TV shows, movies and books, have a unique opportunity to reach people who would not otherwise seek out LGBT perspectives. A lot of people would never watch explicitly-gay shows like Queer As Folk or The L Word — but as we make more and more inroads to otherwise-straight shows, like Pretty Little Liars or Glee, it becomes harder and harder for homophobes to avoid queer people on TV. And harder and harder for them to avoid empathizing with us. 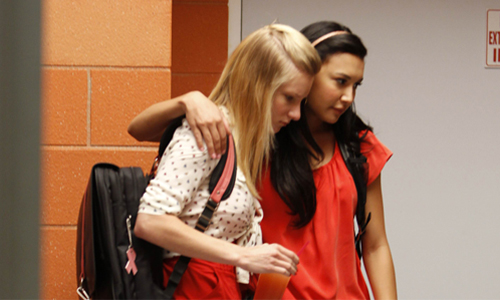 Even reality shows, despite their often stereotypical nature, can have an impact. Carson Kressley, once the co-host of Queer Eye for the Straight Guy, mentions that as a result of the show: “I had so many young people come up to me and say, ‘You know, because of your show I was able to have a dialogue with my family about me being gay or a friend being gay.'” Now Kressley has a new show on OWN called Carson Nation, where he plans to hit the road to small-town America, increasing visibility even more.

So for me, the question isn’t whether I should take a stance on these issues with my music, the question is how effective it is. With the obvious exception of opera, classical music isn’t always the best medium for transmitting a “message”; even with lyrical songs, there’s a very thin line with “message music” between the inspirational and the pedantic. The other dilemma is how many people I will actually reach, now that classical music has become a niche genre — and modern classical music a niche within that niche. At the same time, though, because classical music is still seen as more “serious” than other forms of art, even controversial and racy works are granted “educational value” that popular media is often denied.

And those in the so-called “high arts” are taking their places on the barricades as well. We previously reported on the controversy surrounding Beached, an opera with a gay protagonist that was due for a premiere from Leeds’s Opera North, before the Bay Primary School objected and pulled their students. The school has since re-joined the production after the line “Of course I’m queer / That’s why I left here” was changed to “Of course I’m gay / That’s why I went away.” It turns out that the school didn’t object to the gay themes so much as the use of the word “queer,” with its history as an epithet. So now the kids of Bay Primary will get the chance to not only experience an amazing yet oft-misunderstood art form (in the opinion of this opera buff), but also learn a little about the lives of gay people — at an age when many of us didn’t even know what the word “gay” meant. And at an age when these kids probably wouldn’t be allowed to watch Glee or similar TV shows. 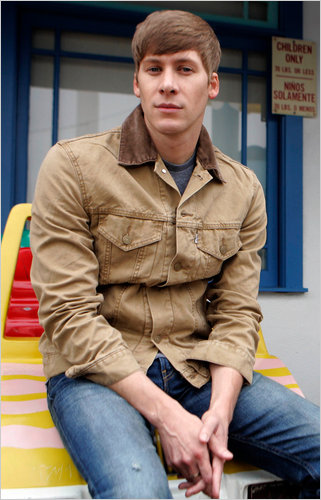 Theater, both musical and otherwise, has also been great to LGBT people. In fact, plays like The Children’s Hour (1934, film 1961) and The Boys in the Band (1968, film 1970) were on the cutting-edge in terms of media portrayals of homosexuality, addressing it when it was still very taboo. Yet, in recent decades, plays about gay people have taken an explicitly activist turn, discussing subjects such as AIDS (Rent, Angels in America) and anti-gay violence (The Laramie Project). The latest to enter the throng comes from Milk screenwriter Dustin Lance Black, who is working on a play about Proposition 8, titled “8,” to be premiered Sept. 9th at Broadway’s Eugene O’Neill Theater. It will go on tour to various colleges, including Carnegie Mellon, Northwestern and the University of Michigan; the cast of the Broadway revival of Hair also plans to include it as part of their upcoming national tour. Black was inspired to write 8 when he found out the Prop 8 trial would not be broadcast over the Internet:

“One of my hopes about the trial was to get the opposition in court, hands raised swearing to tell the truth, and have the world see the opposition called to account for going on TV saying gay people harm children, harm families,” Mr. Black said. “Since the trial itself wasn’t heard or seen, I wanted to get the story out another way.”

The script is largely taken directly from the several-thousand-page-long trial transcript, and Black worked for half a year “min[ing] the best arguments on both sides” to turn it into a 90-minute play. As 8 makes its way across Broadway and the country, it hopefully will turn even more hearts and minds toward the cause of equal marriage rights.

Because art imitates life, the increased pressure on artists to do battle in the struggle for equality can extend to their personal lives. The personal is political, after all. This has led to intense finger-wagging toward ambiguously-gay media personalities who have yet to make any official declarations. Yet, coming out is never easy, even for people in relatively liberal environments. We’re still unequal in the eyes of the law, regardless of what our friends and families think. Plus, there is the fact that sexuality often doesn’t fit into the neat labels society provides us, so the issue is less whether we will be accepted, but if we qualify in the first place. As Ricky Martin mentions in a recent interview: “Since I came out, a lot of people have said: ‘Were you living a lie?’ I don’t think I was. Was I feeling things with women? I was. And I was fully functional.” 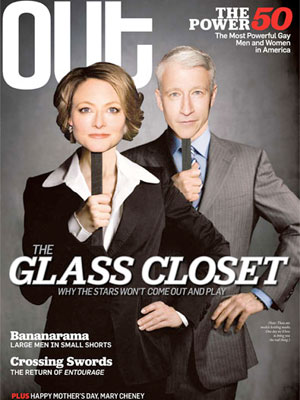 via Rodney Smith - OUT

The other thing people tend to forget is that just because one has been able to move to a liberal, accepting place, it doesn’t mean they started out there — and it doesn’t mean the people back home stop mattering. As one would expect from a performing arts school in a blue state, the music conservatory I attend is bursting with gay men. It’s a running joke that half the guys in each freshman class will come out by the end of the year. Yet, some remain in the transparent closet, with everyone wondering why they have to hide who they are at such an ultra-gay school. It’s because they can’t stay behind come the holidays or summer. They have to go home, and back into the closet. And in the era of Facebook and, now, Google +, it’s becoming harder and harder for students to hide their college life from their parents and high school friends — whether that “double life” means partying their faces off or it means being gay. If it’s that hard for ordinary college students to be “selectively out,” imagine what it is like for celebrities!

Also, when Queen Latifah says that her personal life shouldn’t be an issue, I can’t help but think that is how it should be. Sexuality shouldn’t be a huge issue! Unfortunately, we are not there yet. While everyone is free to choose how/if they come out, including celebrities, I can’t help but feel like it compromises the “it gets better” message that even beloved celebrities are choosing to remain closeted. How, then, can we expect ordinary kids to take that step?

The role of the artist in political discourse is a complicated one, no matter the issue. But especially when it comes to the fight for queer equality, as sexuality is a much more personal topic than most others. What is more important: the “pre-emptive duty” artists have to help make things better, or an artist’s right to a private life? Or just to dictate the terms of their art? Little further explains why his music doesn’t take stances: “While I want my work to engage in the political, I have no interest in creating work that serves only as a vessel for delivering a political message. The world has enough pundits.” That makes perfect sense to me.

Not every artist should have to be an activist. Heck, not every artist can be. But for those who do use their talents for advocacy, it can make all the difference.