For a few years now, we’ve suspected we might be entering an Era of Gay – a time when we stopped being on the fringe and finally got a piece of the actual blanket. Recent events make us all even more sure: it’s a pretty good sign when the Supreme Court decides to take on DOMA; an even better one when the democratic process works in our favor, and full-on heartwarming when the UN makes gay rights the focus of Human Rights Day. But how, in America, do we really know we’ve made it? When the country’s largest conservative voting block starts to come around. When someone like Jimmy Weaver, a 58-year-old self-described conservative from Tennessee, tells a New York Times reporter that “most of [us] are very nice.”

In a recent article in the New York Times, reporter Michael Winerip interviewed several members of a rapidly growing subset of “Baby Boomers”– conservatives who support gay marriage. In addition to Weaver, he spoke to a contractor from Minnesota, a sheriff from Oregon, a former businessman who retired to Florida, and an insurance agent from the Soviet Union, now living in Brooklyn. Although their comments are often rife with stereotypes and outdated lingo, and are sometimes tinged with a slight, othering kind of condescension (“I have a cousin who’s bi, went every which way . . . she took me into a fully gay bar . . . these people have a sense of humor”), it still is what it is: new ideas about what our fellow citizens should be allowed to do. And in the age of the voter referendum, actions speak louder than words. 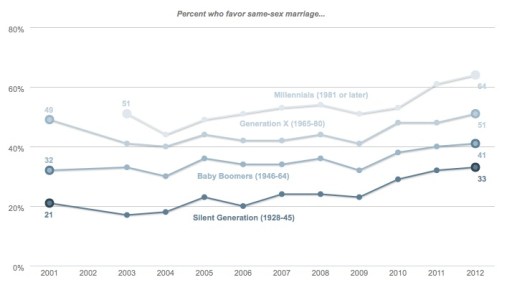 JUST LOOK AT THAT PARALLEL UPSWING {VIA PEW RESEARCH CENTER}

In choosing his subject matter, Winerip was just following the numbers – trendspotting, even. He cites a Pew Research poll taken at the end of October which shows that, after holding fairly steady from 2000 to 2009, public support for same-sex marriage has shot up over the past three years, gaining around ten percentage points in every age category. Of course, the overall effect of this relative gain depends on where each group started from, which has a lot to do with the generation they belong to. The baby boomers (48-66 years old) are up to 41%, a 9-point gain over 2009. A majority of Gen-Xers (32-47) are now in favor of same-sex marriage, whereas most Millenials (18-31) have felt that way since 2006. And a solid third of the Silent Generation (67-84) is in the gay corner now.

These numbers make it clear that the march of progress is inexorable – “quite literally, the opposition to gay marriage is dying,” as conservative commentator George Will somewhat indelicately put it. Winerip’s interviews help shed anecdotal light on why. Almost everyone he talked to mentioned a queer friend, relative, or acquaintance – a bi cousin, a gay barber, same-sex parents of a kid on their sports team. This trend, too, is backed up by statistics: a CNN/New York Times report from May revealed that 69% of American adults now know a gay person, up from 44% in 2003 (baby boomers are at 77%, up from 42%). The one interviewee with no gay friends, retired businessman David Hanson, had his “about-face” after he got over his annoyance with “how vocal the gay community was” and started listening to what they were actually saying. “I just think it’s the right thing to do,” he says now. Perhaps, as Winerep posits, “familiarity breeds contentment” – or maybe, when an issue suddenly has a face, whether it’s a barista’s or a client’s or a TV pundit’s, it becomes harder to hold a kneejerk or doctrinal opinion (although contractor Doug Montzka argues that his opinion is doctrinal, saying he’s for gay marriage because “the government should be less involved with peoples’ lives” – presumably after they pass the necessary legislation).

This truth – that you can change your neighbor’s political opinion just by being out and being nice – keeps coming up. Harvey Milk knew it way back in 1978 and it gets truer and truer. The other day I was listening to a This American Life episode from 2000, and was surprised with this monologue, by a Chicago native:

The neighborhood has changed a lot, a whole lot . . . close by we have our gay people, which we never had as a kid. They were around, maybe, but we didn’t know who they were. Today, you know who they are. We have the nicest neighbors we’ve ever had, two gay men. They can’t do enough for you, they cut your grass for you, they water it, now that I’m older. And when they moved in, my husband, coming from way back, oh my God, you know. He didn’t want, really, too much to do with them.

Within a year, I’d say, we saw that they were nice people, very clean. And when we had our 50th wedding anniversary party . . . it was our neighbors that went to the hall, they wouldn’t take a penny, they decorated that place like you wouldn’t believe. Now, how many neighbors would do that for you? So gay or not gay, they’re really nice people. So I think that the gays can be credited for being such a nice people. They swayed a lot of the old-time people into different thinking.

And about a month ago I got an email from my boss, a staunch fiscal conservative and a Gen-Xer, in which he told me he’d switched his vote from Romney to Obama because he “just couldn’t take the chance that Romney would destroy the lives of so many people I care about.” To know gays is to love gays. It’s a fact.