George Takei wants us all to have a happy holiday. 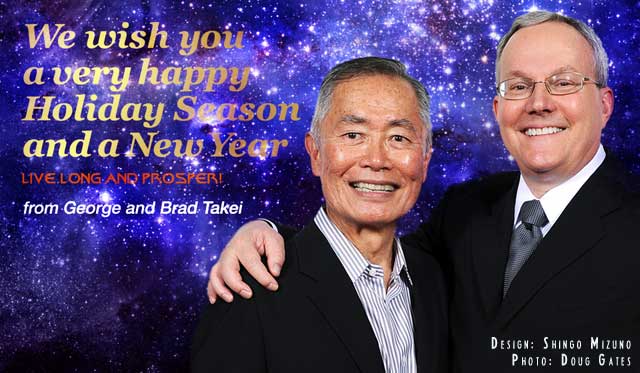 Ain’t they the cutest? via georgetakei.com

Coming out this holiday season? Come out with the help of George Takei, courtesy of Conan and Andy Richter, who will fuck some shit up if your family gives you crap about your queer identity.

Yes, this started out as just a team pick of this video, as it relevant to our interests this time of year with many of us coming out during this festive season to varied reactions. But then I remembered all the awesome stuff Takei has done on the internet and just in general. Yes, I said remember. Because, like many of you, I follow George Takei on Facebook. This gives me some delightful gems in my newsfeed every day and I highly recommend it. Like this one of George Takei reading 50 Shades of Grey:

Or who can forget, in the face of the Tennessee “Don’t Say Gay” bill, that George Takei offered up his name as a synonym to circumvent the rule that you can’t say gay in a Tennessee school (something we’ve reported on before):

By the way, It’s Okay to Be Takei actually still exists.

Takei also took on Donald Trump, notoriously vocal against gay-marriage. Takei, who is married to his husband Brad, is becoming quite the activist for marriage equality.

If you want to know a little more about Allegiance, a musical that deals with the Takei family’s time in Japanese American Internment, you can check that out.

Or how about this video, in which Takei calls Justice Scalia’s comments repugnant:

Wanna know how Takei navigates the social media machine while generating so much awesome? Oh Myyy (There Goes the Internet) is actually a thing you can put on your kindle to read with your eyeballs. You better believe I’m downloading that sucker tonight.