It’s our twenty-sixth Autostraddle Anonymous Sex Toy Review! Over the last few years, we’ve been propositioned frequently by sex toy companies wondering if we’d like to review their toy in exchange for, you know, their toys. In 2011, in addition to “saying yes to the dress” we started saying YES to the sex toys!

This week, one of our anonymous reviewers looked at the Sqweel 2. 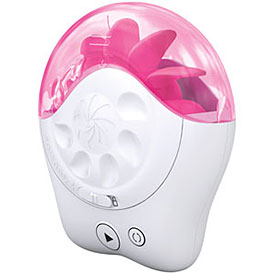 It should be said before anything else that, while the Sqweel 2 is the world’s best-selling oral sex toy, it is not the same thing as oral sex. Do not use it expecting it to feel like a real live human partner going down on you, because it will not. Think of this as a veggie burger: something that’s basically completely different than the thing it ostensibly imitates, but is still delectable in its own right.

The Sqweel boasts a regular “licking” setting with the “tongues” of the wheel moving forward, and also a backwards setting in which the tongues reverse direction, and a “flicker” mode in which the tongues move back and forth. Neither of these latter two modes were life-changing for me, as the edges of the “tongues” were thinner and tapered, so any mode where the edges came into contact with the body felt to me more like poking than licking. Other reviewers seem to have found these modes very enjoyable, though, so to each their own. Although I may be spoiled by years of intuitive vibrator use, to me one of the major drawbacks of the Sqweel 2 is that changing power settings or modes requires either a lot of coordination or two hands — the wheel is bulky enough that I needed one hand to hold it in place and the other hand to press buttons. Granted, you probably aren’t going to be using your other hand to fill out Sudoku puzzles, but for some it might be a lot of spatial skills to integrate while also focusing on your Rachel Maddow fantasies.

The Sqweel 2 does require a lot of (water based!) lube to work its magic, and applying plenty of lube both to yourself and to the wheel is recommended. The toy will need to be disassembled to be cleaned after use, and realistically, you will probably also need to be cleaned after use, so that’s something to plan for. It’s also louder than the product description led me to believe, with a definite motor sound, so may not be ideal for use around roommates or if you’re a counselor at vacation Bible school. It runs on 3 AAA batteries, so make sure to have some on hand.

The Sqweel 2 might not become the go-to toy in your arsenal, but when you’re ready to switch up your routine and treat yourself to something new, for this price it’s worth a shot.