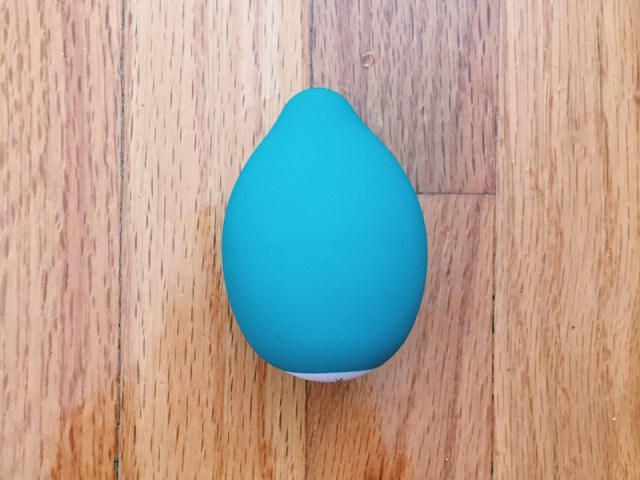 Let’s get the “it’s so cute it looks like a lemon that underwent genetic modification to become colors lemons aren’t in nature” part over with, because it does and it is and I want more teal sex toys now please. (It also comes in pink, I guess.)

The Minna Limon is a cute, smallish, lemon-shaped, waterproof, rechargeable external vibrator that you control with a single button and by squeezing two pressure cushions on each side. The cool part — the part that had people most excited about the Limon when it had its indiegogo campaign in 2013 and the part that made me want to try it out now — is that the squishy pressure cushions respond to the speed and intensity of your touch without any interference. If you want it lighter or stronger you squeeze lighter or stronger and it just does it. This makes it incredibly responsive to your body in a way that feels natural (because you’d be holding it like that anyway) and doesn’t involve any extra steps.

You can make your own patterns as you go, and you can also lock one in. I usually hate the pattern settings on sex toys because they always seem to just get in the way. The Limon is the first where they haven’t. I still found myself not really setting a pattern, because I liked it being responsive to my touch so much, but I did find myself locking it to a steady intensity sometimes. Which I actually found raised a dilemma: if I want to use the Limon on a high-intensity setting, I have to squeeze it pretty hard, and because I take a while to come I have to keep squeezing for a while. The whole body of the toy vibrates (which is otherwise a plus), so my hand absorbs some of the vibrations; it also means that after a few minutes my fingers start to want to do something else. When I set it to stay on a stronger setting, it’s way more comfortable to hold, but because I have to grip it less tightly, it’s also way more likely to slip out of my fingers. (Cupping it with the palm of my hand helped a little, but not when I wanted the nub at the end of the toy directly on my clit.)

That same slipperyness came up when I used it with a partner — between lube-y and otherwise damp bodies and lube-y fingers, we just kept dropping it. The silicone of the toy is matte, soft and smooth without being shiny or draggy, and doesn’t pick up dust if you set it down for two seconds like some toys I could name, but it still slipped out of my fingers more than once. But otherwise, it was really great to just grab it and use it and be able to use it on the right intensity for the moment without having to mess around with settings. It was also fun to wedge between us during sex, though I found I mostly had to hold it in place. (And, unlike other vibrators I’d think of as small, there was no way it was going to fit in a harness during strap-on sex.)

It’s also pretty strong — not just strong for something small, but objectively strong, with a range of speeds that are nice if you just don’t want something that intense right now. And quiet. And rechargeable. Related, and possibly best of all, when you turn it on it vibrates to let you know how charged it is, something I would describe as sex-changing.