Welcome to Butt Week, friends! An entire week dedicated to butts and butt-adjacent stuff: how-tos, thoughtful essays, original art, pop culture critiques, music and more! You are absolutely not ready for this and yet it is happening to you, right now. Today we’re republishing a classic sex toy review to end all sex toy reviews. Originally published October 22, 2013, were we ever so young. 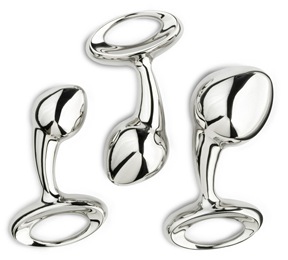 You can put this in your asshole!

I got the Pure Plug in the mail and let it sit on my counter for about a week. This was not because I was scared of using a butt plug. It was more that I was so freaking turned on by the idea of using a butt plug I didn’t want to actually use it and have it be over! 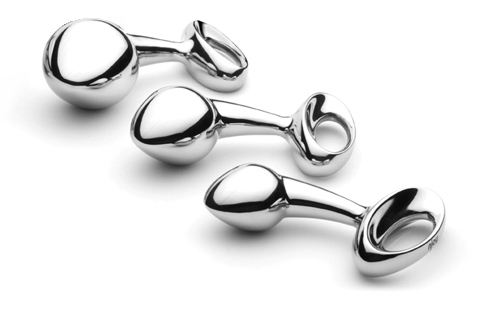 It’s just like the three little bears… but for your asshole!

Okay, I’ll be honest, it occurred to me sooner but I was too embarrassed to buy any of the ass play sex toys I saw in sex shops. There I’d be, standing in the middle of Babeland buying a new paddle or squeezing the Shiloh and the Mustang, trying to decide between them, all the while side-eyeing the glistening stainless steel butt plugs.

So when I got the Pure Plug in the mail from Babeland it was like Christmas. Christmas for my asshole. And yes, after a few tantalizing days, I did take that butt plug down off the counter and put it in my asshole.

Here’s what I did. I had the smallest of the sizes (the Pure Plug comes in three) and I went really really sloooooooooow. And I used All The Lube. Mechanically, I laid on my back, threw my legs over my head a la a yoga “plow” and then inserted the Pure Plug with the curve pointing towards my belly button.

Actually, first I inserted it in my vagina because I am much more accustomed to shoving things in there and it made me feel more acquainted with the size of the thing. 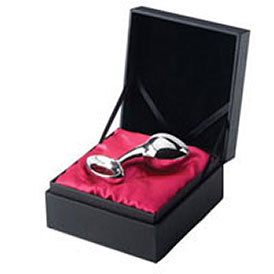 OMG did I mention it comes presented to you like an engagement ring?

This is a good time to remind everyone that your asshole is a swirling vortex that will suck in anything you let it, so your sex toys all need to have a three inch flange. Many stainless steel butt plugs (like the kind with the jewels on them) don’t have a large enough flange! The flange is sometimes even smaller than the plug! The Pure Plug’s flange is right on the cusp of being large enough lengthwise, but it’s so thick and stiff that it would be difficult for your asshole to suck it in. That being said, a removable flange might just give you more peace of mind.

Now that you’ve all come on this First Butt Plug Journey with me, let me start out the actual product review by telling you that nothing, and I mean nothing, feels as smooth as stainless steel on your asshole. If you’re someone who is turned on by sensation of soft, heavy smooth surfaces across any part of your body you’re going to be turned on by the Njoy Pure Plug. It’s just impossible not to be.

Once it was in, however, I found the real draw to be the weight of it. Even the smallest Pure Plug is 5oz and that feels extra heavy when it’s inside your asshole. As someone who’s so turned on by the idea of their asshole conceptually, I found that the weight brought my attention right to my asshole. Constantly. This was a turn on all by itself. 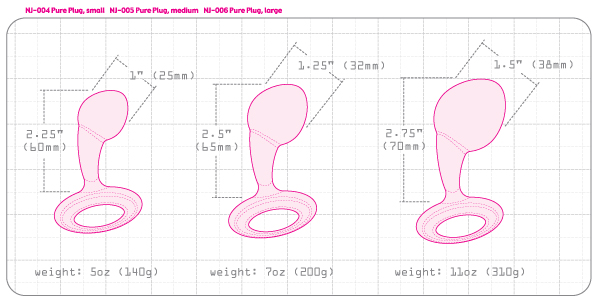 The specs. The glorious specs.

Here’s the thing; once you come, you still have a butt plug in. In my experience, after I come I usually don’t feel like having my butt plug in anymore. Unfortunately, to me, pushing a butt plug out feels just exactly like taking the cleanest most amazing shit of your entire life. To date I am not yet, for this reason, comfortable taking the Pure Plug out while in bed. Usually I bask in post-orgasm glory and then sneak off to the bathroom to remove it. This is also sort of convenient because then I can wash it with antibacterial soap and water. You can also boil it or run it through the dishwasher.

The only downside I’ve found thus far is that, even though I’d never used a butt plug before, I found myself wishing I’d bought the medium or large size. The small is really quite small.

So would I recommend the Njoy Pure Plug? Duh! Did you just read that review? I sound like one of those people just discovering their clits for the first time!

If you’re someone who’s just getting interested in venturing into the world of butt play I think the Pure Plug is a great place to start. While I believe the price tag is worth it, it might be a good option after trying something else that’s cheaper first. If you’re someone who already knows they love butt plugs you can probably just go ahead and buy the Pure Plug right this very minute and move on with your life. You’re going to like it. 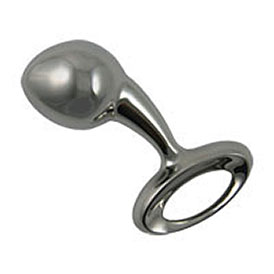 Did I ever tell you you’re my hero?