This week, one of our anonymous reviewers tried out the Je Joue Ami Balls, sent to us by Babeland. 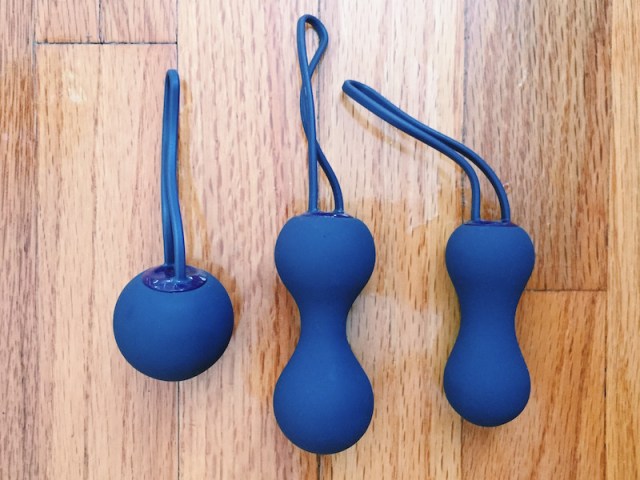 Je Joue’s Ami Balls come in a set of three kegel exercisers designed to help strengthen the PC muscles and thus to make you come harder.

There are three toys in the set, of different sizes, shapes and weights. The first is a single ball, the second is a larger double ball (shaped almost like a dumbbell for your vag) and the third and heaviest is a smaller double ball. They weigh between 1.65 and 3.73 ounces, which feels like maybe it could be noticeable in the hand but which I found was not noticeable during actual use. Each has balls inside that move around. Each is made of soft, matte silicone with just a little give.

I found the balls easy to insert with just a touch of water-based lube, and easy to get into place. Wearing the kegel balls felt about as sexy as wearing a tampon, which is to say I did not notice they were there, except when the little silicone loop meant to make removal easier got in the way. And it got in the way quite a bit. It’s possible I just have a shorter vagina (though I doubt it), but even with the single ball wedged up behind my public bone the loop loitered outside of me just enough to be irritating. It’s also made of silicone, and though it’s thin and flexible, it’s still somewhat firm. Walking around, sitting, lying down or running errands didn’t make a difference — I just kept feeling it. Even at the furthest point away from my period in my cycle, when my cervix was sitting at its highest, the loop still dropped down enough to annoy.

I think had I been able to feel more of the body of the toys, that wouldn’t have bothered me as much. But even with the heaviest Ami, I just couldn’t feel much unless I was pushing it in or pulling it out. No noticeable muscle use keeping it in place or involuntarily clenching around it. No delicious rolling around with every step or shift in my seat. No sense of weight.

The one time I could feel the Ami was during orgasm, where each was conveniently hands-free and just enough to clench around. Even then, I still couldn’t feel any internal movement. This bugged me since it was the element I was most excited for, but if you’re very sensitive or want to use the Ami exclusively as exercise (and believe exercise should not feel fun) this might be a bonus.

And though it’s possible my pelvic floor is so swole that it notices a few silicone ounces the way the Rock notices a ping pong ball, I suspect many people will find at least some of the Ami balls a little light. (On the other hand I have not given birth and clench a lot of muscles in my torso including my kegels when I get anxious, which is almost all of the time, so who knows.) It’s also possible that my vagina isn’t sensitive enough to feel small movements. I asked a partner to try the set out for me and she reported similar results; unlike me, she did notice a sense of weight with the heavier two toys, but she couldn’t feel the internal balls moving either.

This does highlight one major upside to the Ami balls, namely that they’re very easy to sterilize and share. Another upside: since there are three of them and they’re individually contained (instead of having one casing that you pop different weighted balls into, as with Luna Beads), you can share them simultaneously. And on your own, it’s nice to have the option to try out different sizes and shapes without needing to buy something else. Finally, loop aside, the source of my frustration was that the Ami felt a lot like a tease. If you are into teasing, you might love them.

Je Joue does have a heavier, thinner kegel exerciser, the Ami Plus, which is more challenging. Because the silicone is nice, the Ami is easy to clean and sterilize, and the idea is sound, I’m likely to seek out the Ami Plus. For now the Je Joue Ami Balls live at the back of my closet — though that doesn’t mean you shouldn’t consider a set for the top of your nightstand drawer.