ANN COULTER: Ann Coulter guested on Joy Behar’s new show [which we love btw], to say that liberals are racists and assassins and that if something “happens” to Obama, it’ll probably be at the hands of “move on dot org.” You can read all about it in her book, Guilty, which she shamelessly plugs 500 times throughout the interview. The best part is when Joy asks when we’re allowed to smack Ann. ASAP!

I swear this woman gets away with saying shit Brooke would never let me say on the internet. As a former temporary employee of Moveon.org, I take this quite personally. The only human being I could imagine injuring is  Ann Coulter, or perhaps whomever was responsible for throwing thousands of Moveon buttons into the backroom of a Cincinnati Post Office, inciting worldwide anger from liberals demanding immediate arrival of their free buttons, lest they vote for McCain instead.

Here is my question for you, dear reader: What does Ann Coulter do at home alone at night? Does she sing in the shower? Does she like musical theater? How does she wind down before bed? What does she laugh about with her friends? Does she have friends? Does she cackle? I am fascinated by people like this. I want to know what they do when they’re just being people. Have you noticed I’ve been rambling aimlessly in daily fixes for a few days now? Do you ever accidentally type “google.om”?

BATTLE OF THE SEXES: 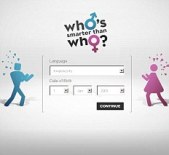 Are men smarter than women? Trivial Pursuit wants to find out who’s smarter; girls or boys? To do this, they’re setting up a online trivia game where anyone can log in and give it a shot. This actually makes no sense at all. Though they go into great detail explaining why it’s a waste of time to play for the other team and answer incorrectly in order to tip the balance, they don’t mention what a loss you’d be to sociology if you just, you know, had a friend on wikipedia answering for you.

“The experiment will finish on December 9 when the question of who is the smartest sex will be finally answered once and for all.”

Problems with that statement include but are not limited to: “The question of who is the smartest sex” isn’t exactly pressing at this time, your online game of Trivial Pursuit isn’t going to answer that question, anyhow. Is this legal? Can we say that Autostraddle will answer the eternal question of why headphones only last two weeks and then make a ton of money? Then we can buy expensive headphones omg can you tell that it’s Friday!!!??!

YOUTUBED: YouTube Gays Killed the MTV Star? “From Britney to Whitney, Miley to Shakira, when a pop star puts out a new hit, the gays film a video tribute. Beginning with Shane Mercado’s take on Beyoncé’s “Single Ladies,” a new kind of star was born.”

HEALTHCARE: Framing Health Care Debate As Battle Of Sexes –  “A recent study by the National Women’s Law Center found that 25-year-old women have been charged up to 84 percent more than their male contemporaries for individual health plans — plans that specifically exclude maternity coverage.”

LAW & ORDER: Law & Order will be airing an episode based on abortion practitioner George Tiller’s murder. It better be better than the Hipster Grifter ep.