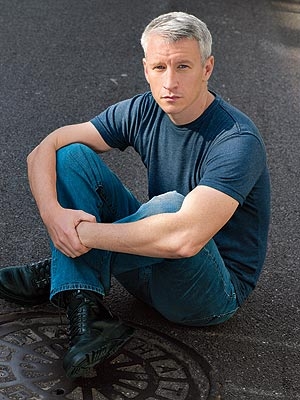 Anderson Cooper’s sexual orientation isn’t exactly a secret. He’d never announced it or anything, but he’d never lied about it, either, and he’s always seemed relatively uninhibited  about appearing in public with his activity partner. But many wondered if he’d ever take the plunge and actually come out, publicly. Today, he did just that.

In Entertainment Weekly‘s cover story last week, entitled ‘The New Art of Coming Out,” the magazine noted that the coming out process for celebrities has changed quite a bit over the last few years and, furthermore, “this new blink-and-you’ll-miss-it style is an important hallmark of changing times.” Drawing from examples like Jim Parsons and Zachary Quinto, the magazine argues that “subtle” is the new “magazine cover” when it comes to coming out and, furthermore “coming out casually is, in its way, as activist as [Ellen] DeGeneres’ TIME cover, although few of these actors would probably choose to label themselves as such.”

Andrew Sullivan at The Daily Beast emailed Anderson Cooper asking for his take on the story and much to Sullivan’s surprise, in return he received an email which Cooper gave Sullivan permission to publish online. Here it is:

Andrew, as you know, the issue you raise is one that I’ve thought about for years. Even though my job puts me in the public eye, I have tried to maintain some level of privacy in my life. Part of that has been for purely personal reasons. I think most people want some privacy for themselves and the people they are close to.

But I’ve also wanted to retain some privacy for professional reasons. Since I started as a reporter in war zones 20 years ago, I’ve often found myself in some very dangerous places. For my safety and the safety of those I work with, I try to blend in as much as possible, and prefer to stick to my job of telling other people’s stories, and not my own. I have found that sometimes the less an interview subject knows about me, the better I can safely and effectively do my job as a journalist.

I’ve always believed that who a reporter votes for, what religion they are, who they love, should not be something they have to discuss publicly. As long as a journalist shows fairness and honesty in his or her work, their private life shouldn’t matter. I’ve stuck to those principles for my entire professional career, even when I’ve been directly asked “the gay question,” which happens occasionally. I did not address my sexual orientation in the memoir I wrote several years ago because it was a book focused on war, disasters, loss and survival. I didn’t set out to write about other aspects of my life.

Recently, however, I’ve begun to consider whether the unintended outcomes of maintaining my privacy outweigh personal and professional principle. It’s become clear to me that by remaining silent on certain aspects of my personal life for so long, I have given some the mistaken impression that I am trying to hide something – something that makes me uncomfortable, ashamed or even afraid. This is distressing because it is simply not true.

I’ve also been reminded recently that while as a society we are moving toward greater inclusion and equality for all people, the tide of history only advances when people make themselves fully visible. There continue to be far too many incidences of bullying of young people, as well as discrimination and violence against people of all ages, based on their sexual orientation, and I believe there is value in making clear where I stand.

The fact is, I’m gay, always have been, always will be, and I couldn’t be any more happy, comfortable with myself, and proud.

I have always been very open and honest about this part of my life with my friends, my family, and my colleagues. In a perfect world, I don’t think it’s anyone else’s business, but I do think there is value in standing up and being counted. I’m not an activist, but I am a human being and I don’t give that up by being a journalist.

Since my early days as a reporter, I have worked hard to accurately and fairly portray gay and lesbian people in the media – and to fairly and accurately portray those who for whatever reason disapprove of them. It is not part of my job to push an agenda, but rather to be relentlessly honest in everything I see, say and do. I’ve never wanted to be any kind of reporter other than a good one, and I do not desire to promote any cause other than the truth.

Being a journalist, traveling to remote places, trying to understand people from all walks of life, telling their stories, has been the greatest joy of my professional career, and I hope to continue doing it for a long time to come. But while I feel very blessed to have had so many opportunities as a journalist, I am also blessed far beyond having a great career.

In my opinion, the ability to love another person is one of God’s greatest gifts, and I thank God every day for enabling me to give and share love with the people in my life. I appreciate your asking me to weigh in on this, and I would be happy for you to share my thoughts with your readers. I still consider myself a reserved person and I hope this doesn’t mean an end to a small amount of personal space. But I do think visibility is important, more important than preserving my reporter’s shield of privacy.

It’s hard to believe now, but it wasn’t that long ago that nobody had heard of Anderson Cooper. The son of Gloria Vanderbilt (yes, those Vanderbilts) and her third husband Wyatt Cooper, Cooper really broke out onto the national radar in a major way during Hurricane Katrina, when he was one of the few television reporters working aggressively and ambitiously to tell the real story of the devastation there.  On the fourth day of coverage, Cooper incredulously challenged a Louisiana senator who praised George W. Bush’s allegedly supportive actions on live television and shortly thereafter, cried on camera, thus earning him the “emo anchor” moniker. It was a turning point in his career. 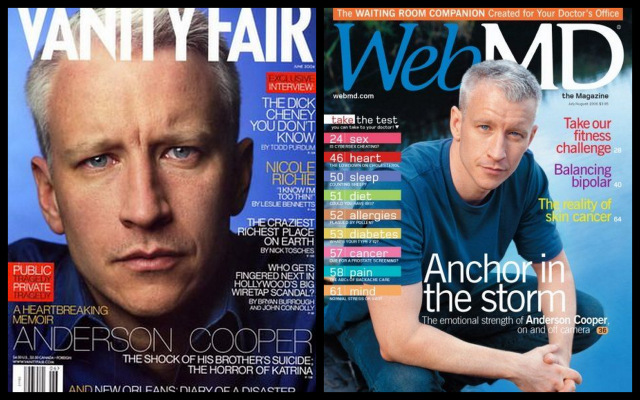 Born in 1967, Anderson grew up in a five-story mansion on 67th and a penthouse duplex at 10 Gracie Square, consecutively. At ten, his father died of a sudden heart attack, and shortly before Anderson was due to start his freshman year at Yale, Anderson’s older brother killed himself, which was cited as “the precipitating event for his career as a journalist.” After college, Anderson began traveling to war-torn or otherwise engaged-in-a-serious-conflict locales, such as Bosnia, Rwanda and Thailand, where he made his own video newscasts to sell to Channel One. His mother recalls that Anderson was never “content living the privileged, pampered life of a New York gentleman.” 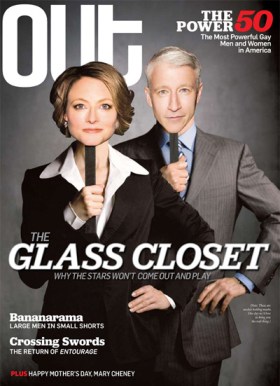 In 2005, reporter Jonathan Van Meter met up with Cooper for a New York Magazine story, a few months prior to Hurricaine Katrina. Early on, a nervous Cooper asks Van Meter, “Why are you interested in writing an article about me?” Van Meter then explains why “there was a sense that Cooper seemed to be on the cusp of some sort of career breakthrough.” Van Meter was correct, and as Anderson’s fame picked up, so did speculation about his sexuality.

There has been a lot of chatter on the Internet about the fact that Cooper may or may not be gay, and Village Voice columnist Michael Musto has taken pleasure in quoting the gay magazine Metrosource, which has referred to Cooper as “the openly gay news anchor.” It has been assumed in certain circles in New York partly because he lives what looks to some to be a gay social life. He’s often seen at parties with Barry Diller, and he’s friends with the lead singer from the outré gay rock band the Scissor Sisters. And then there was the tempest in a teapot regarding a slightly heated interview last fall with Jerry Falwell about gay marriage. Some Cooper-obsessed bloggers insist that the anchor outed himself on the air, taking the gay side of the debate and saying, “We pay taxes.” They claim CNN originally posted a transcript with the “we” and then later changed it to “You pay taxes.” Cooper has maintained all along that he said “you.”

When I bring up the sexuality issue with Cooper, he says, “You know, I understand why people might be interested. But I just don’t talk about my personal life. It’s a decision I made a long time ago, before I ever even knew anyone would be interested in my personal life. The whole thing about being a reporter is that you’re supposed to be an observer and to be able to adapt with any group you’re in, and I don’t want to do anything that threatens that.”

It may have taken nearly a decade to get here — but we’re here. We’re everywhere.