What a fucking week, friends! Please know that Darling Cat Butterbutt is now letting me pet her dumb fluffy head while she’s eating inside the house (before it was only while she was outside and I had to stick my arm out the door while I hid behind it). She’s practically in love with me.

+ Angela Peoples, co-director of LGBTQ equality org GetEqual and the woman in the viral photo from the Women’s March has an important message for white female allies: Listen to black women. 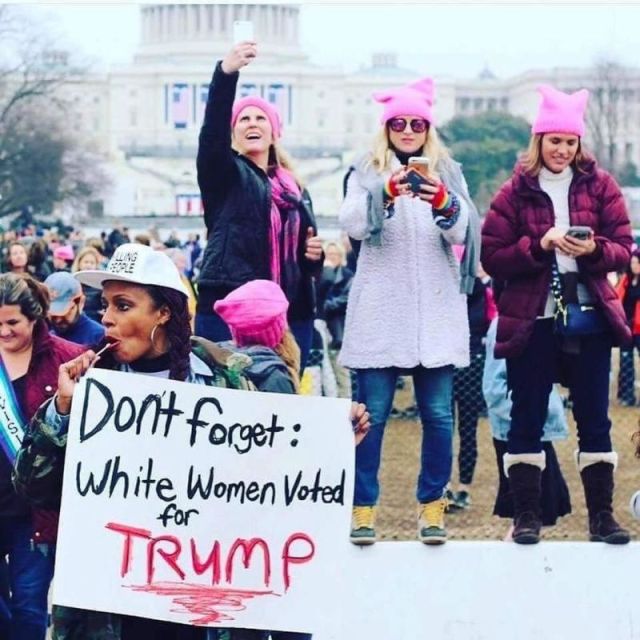 + The Most Important Speech from the Women’s March came from a black femme breast cancer survivor, Erika Hart.

+ Be Steadwell’s Thoughts on the March on Washington. 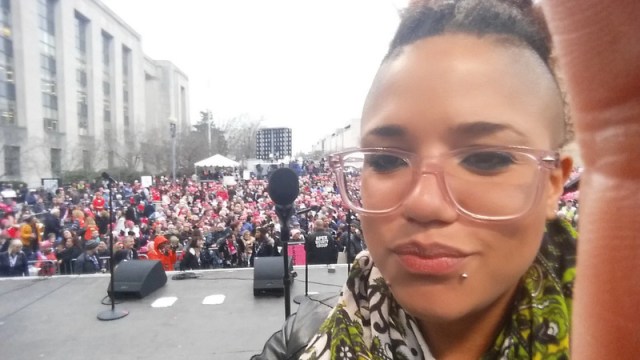 Be Steadwell from the stage

+ ABC to Interrupt LGBT Miniseries When We Rise to Accommodate Trump Speech. ?

+ Trans Men in Georgia Win Right to Change Their Names.

+ Greenpeace’s RESIST Banner was a beautiful sight and also it was hung with the help of black queer feminist activist, Pearl Robinson!

The wind is throwing me around , but it’s so worth it! #ResistOften

+ Trump Has Lots of Options for Inflicting ‘Consequences’ on the Press.

+ Everything You Wanted to Know About That Emoluments Lawsuit.

+ Dan Rather Knows What’s Up.

+ A Lie By Any Other Name, re: Trump being a pathological liar.

+ A Radical Expansion of Sanctuary: Steps in Defiance of Trump’s Executive Order.

+ Here’s All the Land and Water Trump’s Dumb Fucking Wall Would Have to Cover.

+ Here are the 17 Agencies and Programs Trump Wants to Kill, and What They Cost.

+ Have you signed up for these helpful action-based newsletters that Rachel told you about?

+ Black Women Die From Cervical Cancer at Twice the Rate of White Women.

+ The Road Women Marched On This Weekend Was Paved By Black Resistance.

+ When You Brag That the Women’s Marches Were Nonviolent.

+ The Future of the Left is Female.

+ Feminist Organizing After the March: Lessons From the Second Wave.

+ The Women’s March Succeeded Because It Spoke to Women’s Outrage.

+ Rebecca Solnit: How to Find Hope in a New Era of Darkness.

+ The Dutch Plan to Create an International Abortion Fund.

+ 10 Things Women Lose if the ACA is Repealed.

+ For Female Journalists, Mary Tyler Moore Showed Us the Life We Wanted.

+ Aetna Lied to the Public About Quitting the Affordable Care Act.

+ What Standing Rock Meant for Those Who Took Part, and What Comes Next.

+ If You See Something, Save Something: Six Ways to Save Pages in the Wayback Machine.

+ Didn’t even know there was a Doomsday Clock, but now it’s 30 seconds closer to midnight (???) so tuck that in your hat.

+ How to Begin Again.

+ There’s a 1.8-Mile Fissure in the Arizona Desert. Don’t worry I will not fall into it.

+ The Internet Sets Writers Free to Get New Audiences and Also to Dive Into a Giant Flaming Garbage Pile. Pass the potatoes.