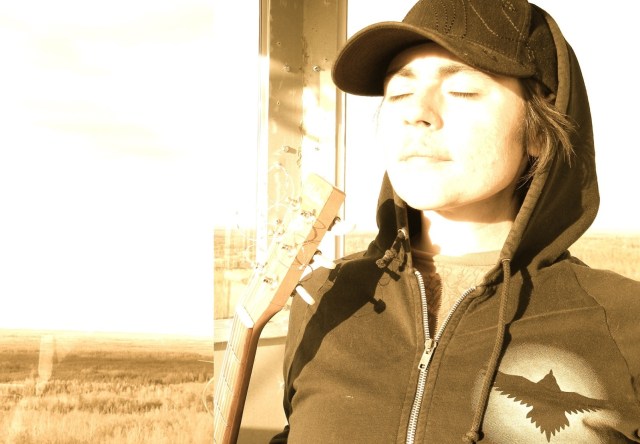 Marina Marina’s ‘organic free range folk pop’ has been described as being “like golden mist caught in a strong wind twisting into patterns and sparkling in the gentle muted sun.” Her music is earthy and soothing and it all sounds so effortless, like her guitar is part of her body. Be sure to check out “Progress Still” below, you might fall in love a little.

Marina has been winning hearts all over the globe; she recently finished an intensive three-month tour of Eastern Canada and Europe and is currently playing a string of shows throughout North America. Next she’ll head to Northern Canada where she works as a Fire Lookout in the summer months and writes and produces in her cabin studio in the forest.

Organic Free Range Folk Pop. Hopefully this doesn’t make people think that I dress up like a chicken on stage playing the ukulele, pecking at the ground and pretending to lay eggs or something like that… because I haven’t… yet.

How long have you been playing guitar?

I had an on again off again relationship with my guitar for a few years after high school until I finally got swept off my feet in 2007, we’ve been inseparable since. I’m planning on proposing but sshhh, I want it to be a surprise. My ’72 Takamine refuses to allow me to see other guitars but has recently decided that it would be ok for me to make out with random banjos here and there.

My fave would be “Progress Still”

Well, now that Tegan and Sara have gone all ‘hardcore Superstar by far’ with Heartthrob I have to hold private dance parties with my bandmate Devin. Whenever we’re onstage gyrating and being ridiculous, “Closer” is totally playing inside my head. Who thinks I should do a folksie cover of it?

What environment do you write your songs in?

Picture a humble cabin isolated in the forests of Northern Canada…where the wolf prints are bigger than your head and the mosquito and black fly swarms are so thick they look like storm clouds on the horizon and sound like ambulance sirens in the distance coming to collect you.

I have this as-of-yet unrecorded, unnamed song that I played last spring for a wonderful crowd at Caffe Fantastico in Victoria, BC. Near the end of the song the entire crowd was singing along and all of the musicians from the opening acts were playing their instruments, guitars, banjos, drums, trumpets, everything! It was the single most inspired moment of my career and continues to propel me towards writing songs that anyone can sing along to.

Intelligent, environmentally aware, hardworking, sexy, queer activists/artists/poets. They also tend to make my knees weak and tie my tongue up.

MP3s are my pref, they take up less space and keep CD’s and vinyl out of the soil.

Best: Having people tell you on a daily basis that you’ve made their day better.
Worst: Not being with my dog.

Tell us about your dog.

Her name is Ember, also known as Cadero, Embercadero, Emmy-Lou Hairy, Arrow and Monkey bums. She’s defs the lead actress in above YouTube video, she throws down a 10/10 scene stealer at the very end. 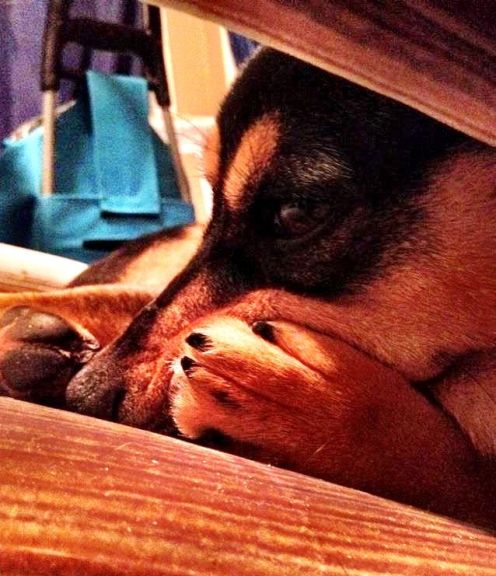 More music and info can be found on Marina’s website. Also keep an eye on her blog for updates and new material as she writes and produces in her cabin studio over the summer.