Hello, internet! Do you know Allison Weiss? If you like indie-folk-pop-rock music or have a Tumblr or have a thing for alternative lifestyle haircuts, you probably know how awesome she is. 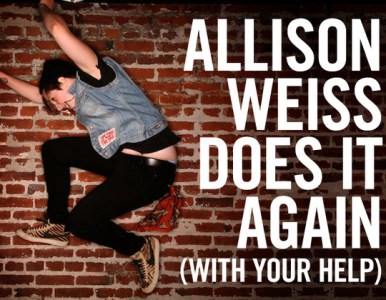 As of right now, Allison Weiss has released one EP and one full-length album, both of which are suitably epic and endearing. But the time has come for something new, which can only mean one thing: a Kickstarter project.

She has a Kickstarter to raise money to fund her new album. It’s off to a good start, but $12,000 is a lot of moneys. Making an album is expensive, kittens!

The video that’s posted on Kickstarter is basically the epitome of what makes Allison Weiss so great: Besides being wildly talented, she’s charming and clever and completely down to earth. All of her professional success has come from straight-up hard work and self-promotion, and there’s a lot to be said for that. She’s the kind of person you would want to get pizza with at 3 o’clock in the morning, I think.

Even the rewards for backing it are pretty spectacular/adorable. They range from a simple “thanks” and access to updates to personal mix CDs to shout-outs at shows. My favorite is the Prom Date:

“I never went to my own prom so if this isn’t awkward, maybe you could take me to your prom. I’ll also play an acoustic pizza party show for you and your friends before the prom. I will wear a dress or a tux, whichever you prefer, but you have to buy me dinner and I can’t spend a ton of money on the clothes. If you’re too old for prom maybe you could arrange a fake prom? I don’t know but this is really awkward.”

ALSO if you back this project, you can hear the new version of the AW classic “I Was An Island,” and for real, after hearing it, I don’t know if I can even listen to the original anymore. It’s just so good, you guys.

In conclusion, if this doesn’t happen for whatever reason, I will cry real tears.