In November, my friend Alyssa and I went to West Burlington, Iowa to read poetry at Southeastern Community College. As we were planning the night and where to get dinner before the event, I remembered that Carol and Therese had been infamously betrayed in Waterloo, Iowa. I wondered if perhaps the two had stopped in Burlington to eat at some point in the novel. I took to the internet to find the Definitive List of Places Therese and Carol Ate in Patricia Highsmith’s stellar novel The Price of Salt but, to my great disappointment, there was none. So that you never suffer the same kind of disappointment, I’ve collected all the places Carol and Therese eat and stay in the novel for your next themed road trip.

Often in the book, the name of the restaurant was not named, so I have approximated to the best of my ability. 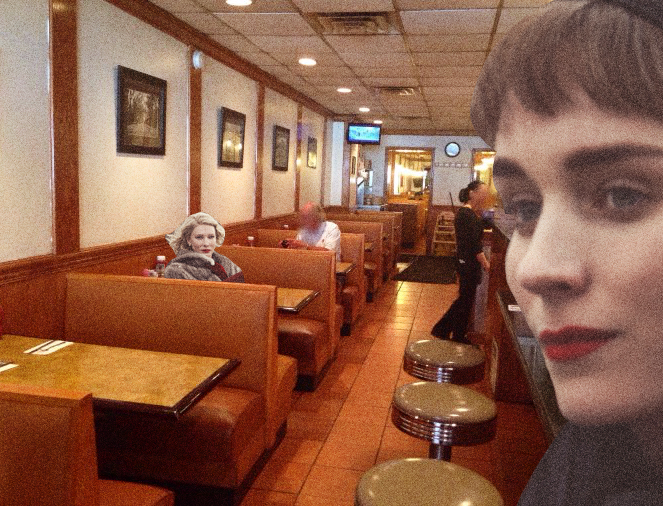 Carol takes Therese out to eat during her lunch break from Frankenberg’s somewhere near 34th street, in an unnamed restaurant with large wooden booth. Although this was rather hard to track down, I cross-referenced with the film Carol where the two go “Scotty’s, on Madison.” Although there’s no Scotty’s on Madison, there is a Scotty’s Diner at 336 Lexington by the corner of 39th street, open 24/7. In addition to serving standard diner fare, Scotty’s does serve beer and wine, but—alas—not the old-fashioned without sugar Carol orders. The two eat creamed spinach with a poached egg on top, “steamy and buttery smelling” (51).

And for what it’s worth, in the movie they drink dry martinis, not old-fashioneds.

HOT MILK, HOME OF YOUR CHOICE 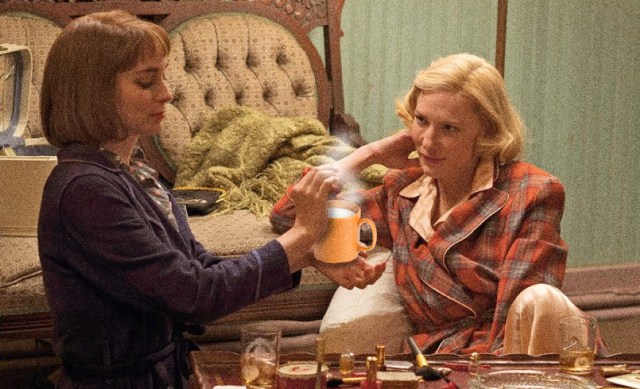 Although this scene, which takes place in Carol’s house, is not technically a place you could go on a queer road trip across the United States, any list about food Carol and Therese consume would be remiss without mention of the Hot Milk Scene. What’s hotter than this milk scene? You read it and tell me.

“Therese was propped on one elbow. The milk was so hot, she could barely let her lip touch it at first. The tiny sips spread inside her mouth and release a mélange of organic flavors. The milk seemed to taste of bone and blood, of warm flesh, or hair, saltless as chalk yet alive as a growing embryo. It was hot through and through to the bottom of the cup and Therese drank it down, as people in fairy tales drink the potion that will transform, or the unsuspecting warrior the cup that will kill. Then Carol came and took the cup, and Therese was drowsily aware that Carol asked her three questions, one that had to do with happiness, one about the store, and one about the future. Therese heard herself answering. She heard her voice rise suddenly in a babble, like a spring that she had no control over, and she realized she was in tears” (67-68). 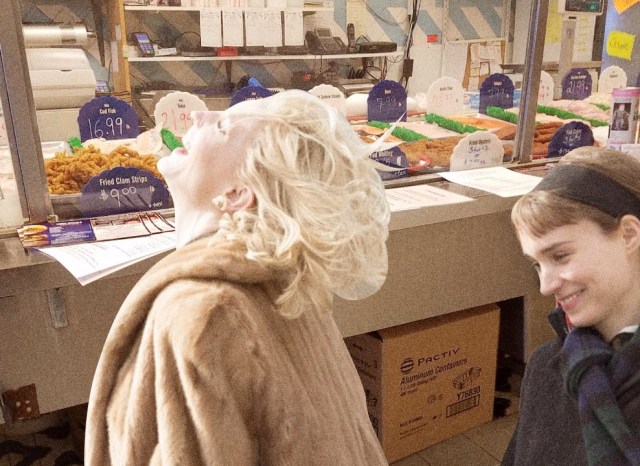 As Christmas approaches, Carol ferries Therese from the city away to a trim the tree in her sprawling house. On the way, they stop for fried clam sandwiches (81). Although the Highridge Fishery in Yonkers was not open in 1952 when the book was written, its fried clams have garnered impressive Yelp ratings. 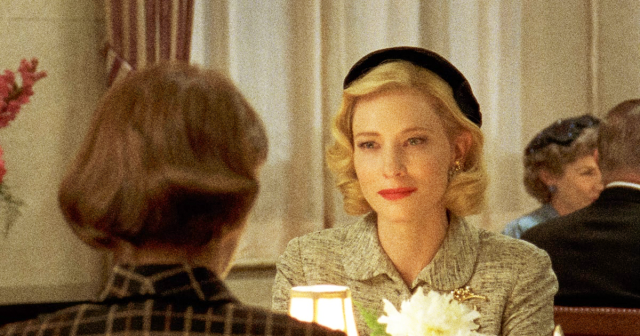 Therese and Carol drink beer and coffee at the Palm Court in the Plaza Hotel with Richard, Therese’s pitiful and jealous boyfriend, who pays for their drinks (148-149). 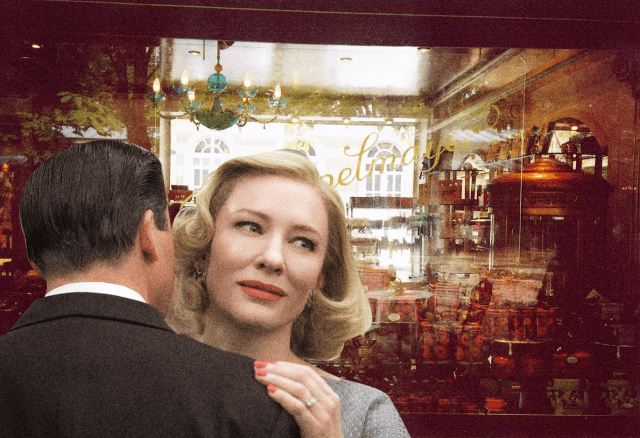 The two end up at Rumpelmayer’s with Richard again, where he eats two pastries, the women ostensibly eat nothing. Carol spots her husband Harge and has a tense conversation with him (150 -151). Alas, Rumpelmayers has since closed. 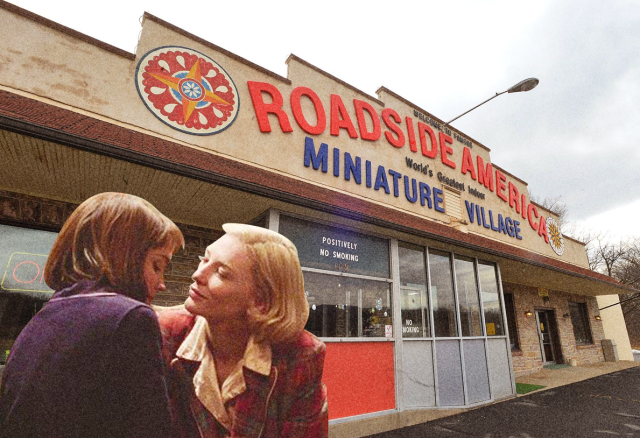 Somewhere in Pennsylvania, “Late in the afternoon, they stopped at a roadside restaurant which had a miniature Dutch village in the front window. Therese leaned on the rail beside it and looked at it” (177). Although it’s not a restaurant, Roadside America in Shartlesville, PA features a warehouse-sized sprawling miniature village in the heart of Pennsylvania Dutch country. The attraction has been open since 1935; Patricia Highsmith might have known about it. I occasionally stop here on trips to see my grandmother and recommend the experience. There is a Dutch Gift Store next door and some restaurants nearby, where you could order soup like Carol and Therese do in the book. 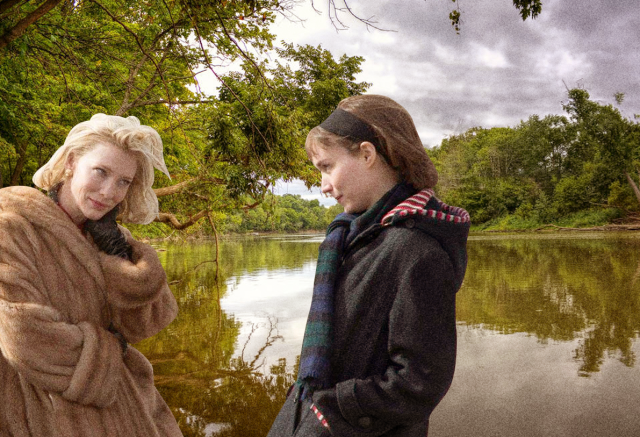 Carol and Therese spend an evening here while they wait for snapshots to be developed. This is a rare stop where your Scandal-themed road trip and Price-of-Salt-themed road trip will overlap. Enjoy a walk along the river and imagine the conversation between Therese Belivet and Olivia Pope. 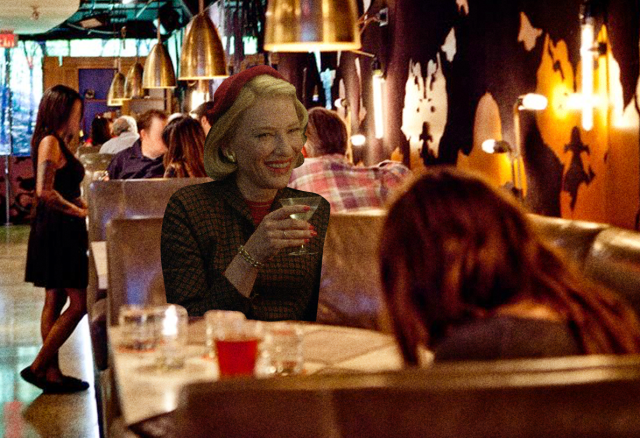 Therese and Carol stay at the Drake Hotel where they have four martinis and unspecified canapés before going to a restaurant overlooking the lake where “they had a banquet of a dinner with champagne and brandy afterward” (184). 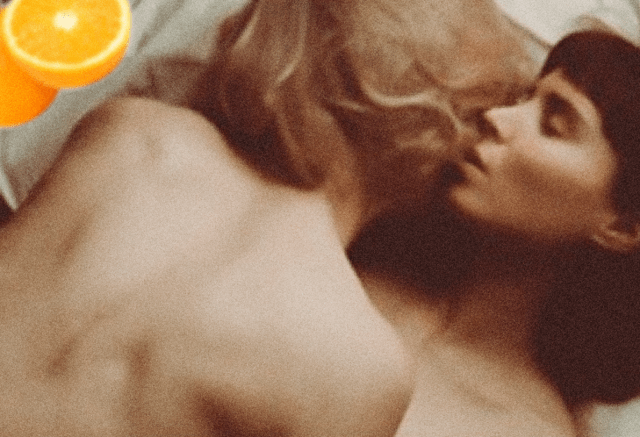 While everyone has some sort of Napoleanic downfall in their life, Carol and Therese’s Waterloo manages to be both tragic and exquisitely moving. In their hotel room they eat an orange, share milk, and (finally) consummate their passion. 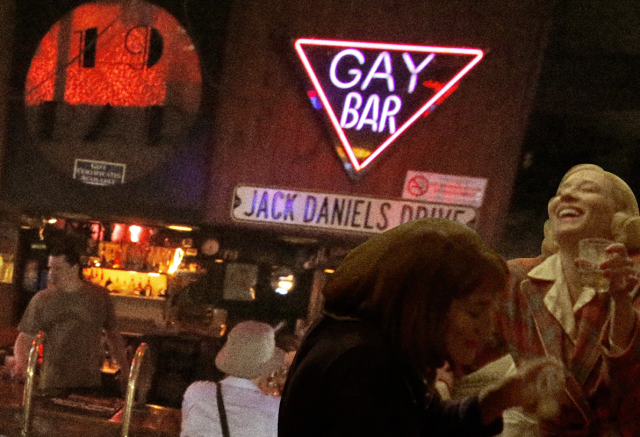 In an unspecified town outside of Minneapolis, Carol and Therese drink brandy. I would recommend drinking brandy in the city of Minneapolis itself, at one of the city’s many gay bars. 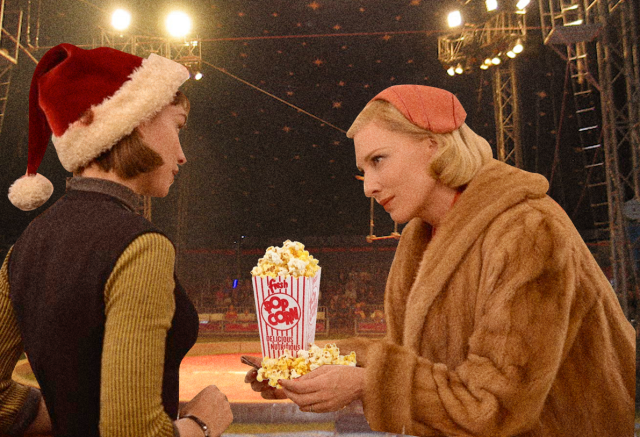 In Sioux Falls the women attend a one ring circus where, “the performers were not very expert.” They eat a bag of popcorn and “it was an evening Therese would never forget, and unlike most such evenings, this one registered as unforgettable while it still lived” (201). Sioux Falls does have an expert orchestra, if you are looking for entertainment. Later Therese returns alone and stays in the Warrior Hotel, which was actually a hotel in Sioux City, Iowa not Sioux Falls, South Dakota.

SOMEWHERE NEAR THE BORDER OF NEBRASKA AND WYOMING 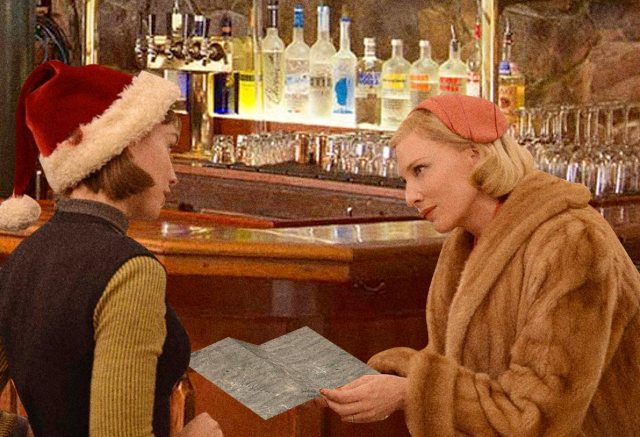 “They stopped for dinner at a large restaurant built like a lodge in an evergreen forest. They were almost the only people in the big dining room, and they chose a table near the fireplace. They spread out the road map and decided to head straight for Salt Lake City” (202).

I have to be honest, I had a very hard time finding some place that fit this description. I would recommend, however, not missing Carhenge, in the nearby Alliance, NE. The two spend the night in Lusk, Wyoming, which Therese says has a sexy name. 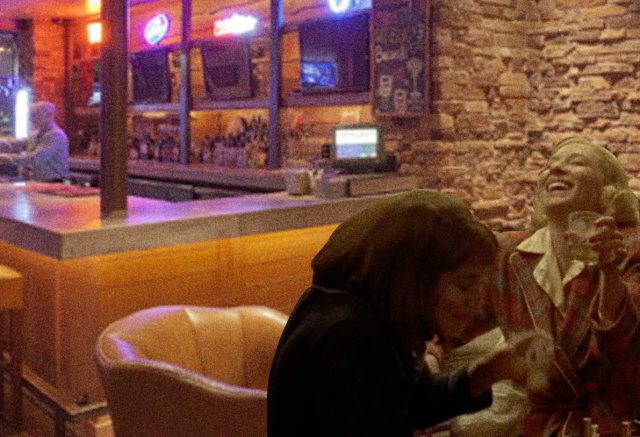 In Salt Lake City, Carol takes a telegram and makes a call in the Belvedere. They both drink brandy in the Temple Square Hotel. 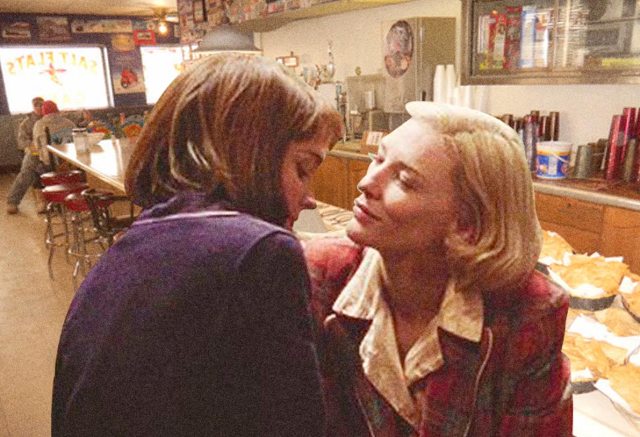 In the great Salt Desert they eat ham and eggs at a “gas station café standing all by itself like a wart on the flat landscape” (206). This restaurant called the Salt Flats Café has amazing Yelp reviews, however, no mentions of a wart-like appearance. 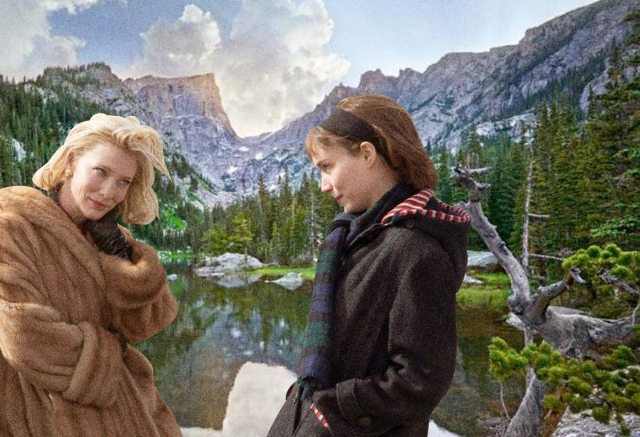 On the run from Harge’s detective, the two women spend a night in Estes Park. There’s no mention of eating, but they do listen to “Easy Living” a couple of times on the portable phonograph in their hotel room (209). 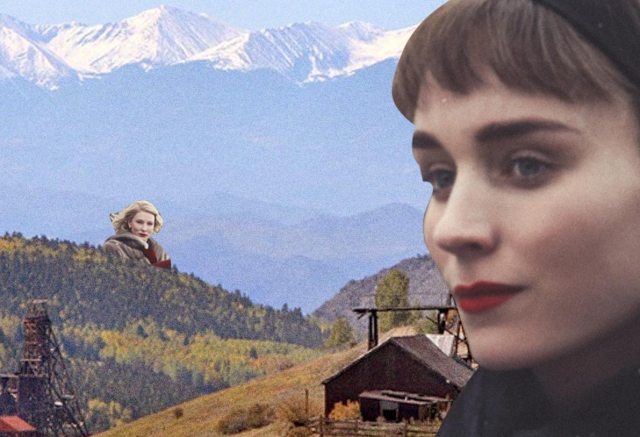 Here Carol rejects a hotel “too much like a resort” and the two stay in a hotel that “backed on the town and faced the mountains” (209). They spend some time here, eating supper in the hotel bar, drinking Remy Martins, and eating baked Alaska. They also go on day trips to Cripple Creek or “a little town they liked and spent there night… without pajamas or toothbrushes, without past or future, and the night became another of those islands in time, suspended somewhere in the heart or in the memory, intact and absolute” (214). 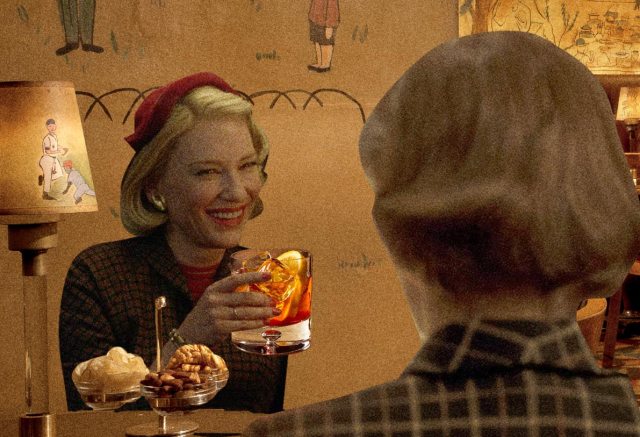 After confronting Harge’s dectective, Carol and Therese stop in Omaha and dump his Dictaphone tapes in the river (231). They drink old-fashioneds in the unnamed hotel, perhaps the Hotel Deco XV, built in 1930. Carol bossily orders Therese scrambled eggs and sausage while she drinks her third old-fashioned. 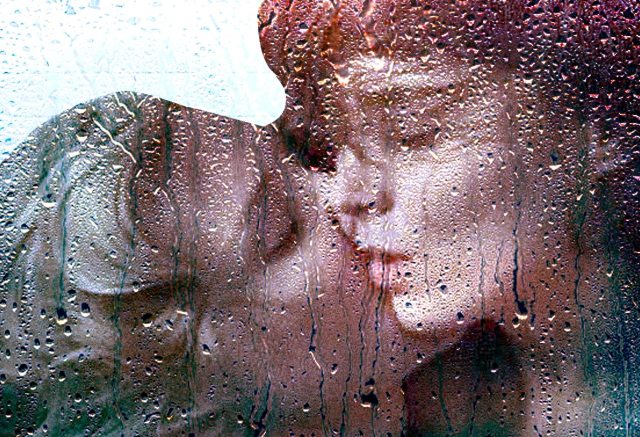 Before Carol leaves for New York, the two women stop in Des Moines and stay at another unnamed hotel. They get in around midnight and shower together. The Savery Hotel was built in 1919, if you’re looking for something historic. 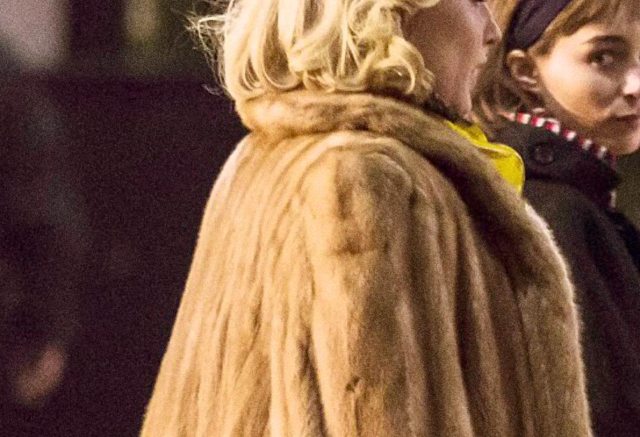 At the end of the novel, Therese makes a Grand Gesture and comes to find Carol. I think this scene renders beautifully what it means to love and try to know someone: “Then as she was about to go to her, Carol saw her, seemed to stare at her incredulously a moment while Therese watched the slow smile growing, before her arm lifted suddenly, her hand waved a quick, eager greeting that Therese had never seen before. Therese walked toward her” (287). Get a drink at the Elysée’s Monkey Lounge and toast to Carol and Therese.

Join A+
Related:carolnovelThe Price of Salt

Katherine Gibbel grew up in Brooklyn, New York. Her writing has been published in or is forthcoming from The Rumpus, The Bennington Review, VICE, and elsewhere. She has received fellowships from the Vermont Studio Center and the Iowa Writers' Workshop where she's completing her MFA in poetry. She tweets @__whom__

Katherine has written 1 article for us.