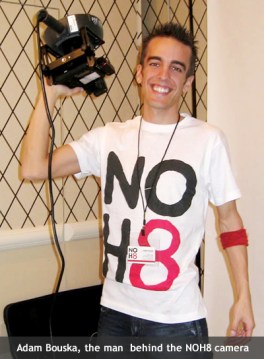 You’ve certainly seen the photos — white backdrop with white t-shirts, mouths taped shut, glossy bright eyes and the standard “NOH8” logo on the cheek. Since November 4, 2008 (the night Prop 8 passed in California),  Adam Bouska (the photographer) and his partner, Jeff Parshley (the visionary), have been photographing thousands of individuals in California for the photo project and silent protest known as the NOH8 Campaign. The project has grown exponentially over the last year to include notable celebrities and politicians: Jane Lynch, Kathy Griffin, Cindy McCain, Meghan McCain, Ashlee Simpson, Pete Wentz, Marlee Matlin, and Isaiah Washington have all posed for the campaign.

However, until this week only those in LA LA land had the opportunity to participate (shoots have also been held in San Diego and Palm Springs).  On February 1, an open shoot was held at the Empire Hotel in New York City, inviting everyone and anyone to throw on their best white t-shirt and strike a pose. Over 500 New Yorkers lined up from 2 – 8pm (despite the cold) to have their photo taken by Bouska and during the time I was there, I saw a healthy mix of ages, races and gender. 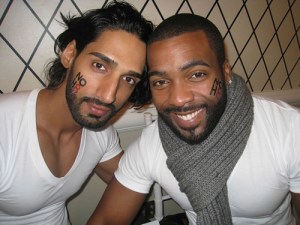 While in line among strangers, I chatted with two adorable men living in Brooklyn, Steven and Abdul, ages 31 and 26, who had been following the campaign since the beginning: “I had been following them online and just waiting for them to come to New York, just stalking them til they got here. We stand and get photographed for tons of other things that aren’t important at all, so why not be photographed for something and make a statement? We support the idea of marriage quality.”

Another woman, age 29, drove from Boston to be part of the shoot: “When I found out they would be in New York I figured that was the closest city they’d come to so I came down, visited from friends and this is the last stop. I want my face to be one of those faces up there… though I am afraid my grandfather might die if he sees it.”

A young, bubbly girl, 16, got her inspiration from the E! crowd: “I’m actually a big fan of Khloe Kardashian and I saw it on her Facebook page so I got into the web site and saw everyone else on there, and I was like, oh my god, I gotta do this!”

On my way out I randomly went up to a 45 year-old man standing alone waiting to get inside: “My husband and I got married in California, on September 25, 2008, when it was still legal and so it bugs me that it’s no longer legal for my other friends in LA. It doesn’t seem right.”

.. and here’s my photo, rockin’ the Gaga monster claw! 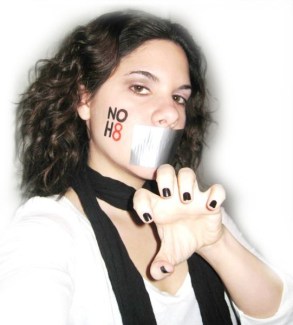