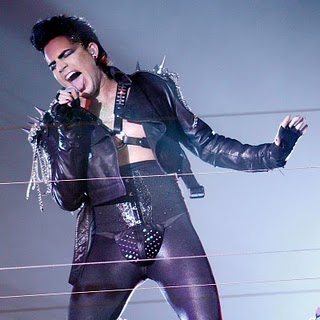 ADAM LAMBERT:
Adam Lambert performed at Sydney, Australia’s Gay Mardi Gras with a giant gold codpiece, glitter in his hair, a tight ass, and an entire team of homosexy dancers, crowning him the shiniest weirdo ever (and we say that with love). This is probably the gayest thing we’ve seen since Adam Lambert’s album cover, and the only context in which we are actually delighted by a bunch of half-naked guys sticking their cocks in our faces!

No but really; what’s consistently interesting about Adam (and Lady Gaga for that matter) is that just when you expect him to retreat from his homosexiness, he freaking throws on some black latex sexpants and gyrates while a dude in underpants and leather humps a gold statue.  You know what I mean — how just when an out gay performer seems to have gotten REALLY gay, they’ll slow down a bit, wait for the tide to settle, try to stay balanced, don’t want to scare the kids… but apparently Adam doesn’t really give a f*ck and besides, this is how he’s used to performing, which is key. “Not giving a f*ck” is very hot, we like that in a man (not you John Mayer, you go back to your room now).

Realistically, Adam’s got a lot of people telling him what to do right now and someone said this was okay (which is a big choice to make in the YouTube era, when stars can’t go do gay performances for gay audiences and expect no one outside of the community to see it), which is a good sign w/r/t tolerance for homosexiness. The reaction to his AMA kiss was, of course, a bad sign. So now we’re even. (Also, he’s been dancing like this for years, babies, like before American Idol.) And we love it!

That being said, those weren’t Adam’s dancers, they were the Mardi Gras dancers. It’s like Iron Chef Australia and the dancers are the main ingredient!

Also, he’s going to be doing a VH1 Unplugged on March 10th.

LOVE FOR THE TWO MOMMIES:
Boulder’s GLBT community is rallying around a lesbian couple told by a Catholic school that they can’t re-enroll their preschooler next year because of their relationship. Aicila Lewis, executive director of Boulder Pride, said her organization is investigating the situation to see if anything can be done to help the family, and the group is talking with community members about discrimination “in our own backyard.” (@daily camera)

LEZZIES:
Our shameless pleas for votes have paid off! We won the 2009 Lezzy Award for Best New Lesbian Blog! We couldn’t have done it without you! We’d like to thank God and the gays. Congratulations to Dorothy Surrenders, Grace the Spot, Up Popped a Fox, My Big Fat Gay Wedding, Feministing, Peaches & Coconuts, Making Space, Sugarbutch, The Lesbian Lounge, and AfterEllen!

VATICAN:
Hey, did you hear about this yet? The official in the Vatican who was caught ordering male prostitutes over the phone? Aside from laughing a little at the Vatican’s expense while they scramble to figure out what to do about the fact that despite their crazy homo-hatred some good Catholics are in fact gay, we can also laugh about the weird hierarchy of the Vatican – Angelo Balducci, the man in question, is “a Gentleman of His Holiness” – and how funny everyone sounds when they are quoted in this article! “”In order to organise casual encounters of a sexual nature, he availed himself of the intercession of two individuals who, it is maintained, may form part of an organised network, especially active in [Rome], of exploiters or at least facilitators of male prostitution.” (@theguardian)

LINDSAY:
Lindsay Lohan co-DJed a set with Gareth Geno in London on Thursday night. Apparently some partygoers were not impressed, like “eyewitness,” who sounds very reliable: “”Lindsay was clearly struggling to play the set on her own and had to ask Gareth for help,” continued the eyewitness. “You could tell she didn’t didn’t know what she was doing… Lindsay constantly had a drink in her hand the whole time she was playing.” Also, here’s a picture of her wearing an animal print coat. Click over to Jezebel to read the Mean Girls jokes in the comments. (@jezebel)

WEIR:
The best thing about the Olympics ending is that you can still get all the Johnny Weir you want without having to listen to annoying homophobic commentators. Here he picks out an Oscars outfit! (@theadvocate)

RIVERS/STREISAND
I guess they made out once? 50 years ago? “The first play I did was in Greenwich Village in the early ’60s. Barbra Streisand and I played lovers and we kissed,” Rivers recalls. “This was before she was singing, before anything. I knew she was talented, but you never know what someone will be. She was a fabulous kisser, that’s what I knew.” (@theadvocate)

AMAZING:
We have no words. Maybe we should LOOK IN A BOOK AND FIND SOME

LESBIAN JAIL WEDDING:
The UK can now boast its first lesbian prison wedding! ” A murderer who knifed her neighbour to death has married a fellow criminal in the country’s first lesbian prison wedding. Sara Crane, who was jailed for life in 2003 for killing David Thompson on the doorstep of his Purley home, tied the knot with drug dealer Joanne Davis in a secret ceremony at Send prison, Surrey. Um, file this one under “we’re not sure how to feel.” (@locallondon)

TUMBLR ALERT:
Hey, Rich at fourfour started a tumblr! It’s a collection of screenshots of times when he pauses movies while watching them. I am not making it sound very interesting, but it is! Check it out! (@fourfour)