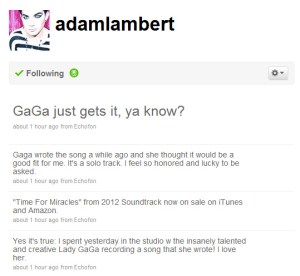 ADAM LAMBERT LADY GAGA: Two of our favorite popstars in the entire universe, Adam Lambert & Lady Gaga have collaborated on a track. Adam announced that Lady Gaga had written a song for him on his twitter feed. Lady Gaga has been writing awesome songs for other people since forever, so it’s only natural she’d lend her skills to our Man-Crush Adam Lambert.  Though we feel it should’ve actually been titled “God and The Gay,” that’s another topic for another day.

MADONNA IS JUST TOO SEXY FOR YOU: ‘Unsexy’ continues to be a hilarious word- “Madonna’s Hung Up, in which she dances provocatively in a pink leotard, has been voted the least sexy music video of all time.” (@telegraph)

TEGAN & SARA: In anticipation of their forthcoming Chris Walla produced LP ‘Sainthood,’ Tegan & Sara will be taking over kickass music site Spinner all this week and through next Wednesday! You can also listen to Sainthood in its entirety on their myspace! Don’t forget to read Crystal’s review and Intern Emily’s track by track breakdown of the album. 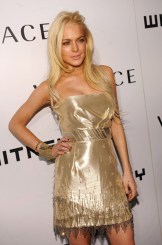 Lindsay at the Whitney Gala October 19

GOSSIP GAY: Chuck Bass kissed a boy on Gossip Girl. If that wasn’t enough for you, TRY READING A MOTHERF*CKING BOOK, b/c in the books, Chuck Bass is bisexual-leaning-towards-gay. Just saying.

SO MUCH GLEE: Joss Whedon will be directing an episode of GLEE!

MIA: Mia Hamm is teaming with Breaking Ball Films to produce a screen version of “Alive and Kicking: When Soccer Moms Take the Field,” a book by New York Times sportswriter Harvey Araton.

THREE RIVERS OF THE SHANE SHOW: You don’t have to watch the whole show just to get to the good parts, a.k.a. Miranda Foster/Kate Moennig/Shane Moments.