comes out today! So does Lady Gaga’s Fame Monster! We’ll have our review of Lady Gaga’s album later today, for now it’s already topping the itunes charts and Adam Lambert is climbing the charts at Amazon.

Guess what poor kids? If you download Amazon’s mp3 downloader, you can download entire albums without protections (this means you can use the songs in Final Cut and iMovie, which is f*cking awesome) and for some reason I do not understand, Adam’s entire For Your Entertainment album is available in this format for $3.99. I even just bought it to be sure. You can also download Lady Gaga’s The Fame Monster (Deluxe) [Explicit] mp3 version at Amazon for $9.49. I won’t link you to the non-explicit version, ’cause that’s just lame right?

Oh, and the gay channel gets ten minutes with him tomorrow, tweet your questions their way!

Also, how did this happen: Susan Boyle CD sets pre-order record? I understand nothing about America! NOTHING!

You can read our favorite recapper’s recap of the event here: The American Music Whores: “Ugh, and if the AMAs are the celebration of a crass industry’s crassness, then awarding Taylor Swift so often (via satellite) was the perfect choice, as she strikes me as particularly fake and dishonest in an industry that peddles artifice as a matter of course:”

Yahoo! Music features perhaps the best write-up of Adam’s AMA Performance addressing the overhype hilariously. And Music Mix asks: What About Adam Lambert’s Vocals? “I’m certainly no prude…the idea of saucy boy-on-boy/boy-on-girl/boy-on-not-quite-sure action does not rattle my cage — certainly not at 10:55 p.m. on a school night. And yet, what’s sad is that unlike, say, a J.Lo or even a Rihanna, Adam could’ve had tongues wagging just from his vocals alone.”

Queerty didn’t really like it: While we must admit we liked the “guys on leashes” thing, we can’t help but wonder, How did this go so badly? (And no, it wasn’t his decision to kiss a male keyboardist, nor “give head” to a male dancer.) but they also note that he certainly is gay enough now, ain’t he – So was the whole thing a carefully staged pop culture shock moment? Absolutely.

“Adrenaline is crazy and sometimes things just happen,” Lambert told reporters after the show [regarding the kiss with his keyboardist] “We had this great dance number totally staged. It’s a sexy song about seduction and power and I was just doing the lyrics justice. My intention was not to try and create a controversy. But if a controversy ensues, then so be it.”

Adam himself has tweeted: “It WAS a bit pitchy. Don’t know what was goin on with the sound. Same thing always went down on idol … All hail freedom of expression and artistic integrity.”

ERIN FOLEY: We interviewed Lesbian Comedian Erin Foley and she is a funny lady. 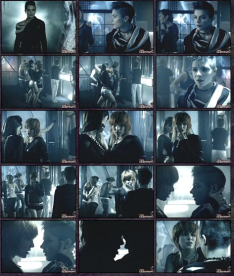 LESBIAN MUSIC VIDEOS: We literally were in the process of writing this exact same article! [Curses the sky, shakes fists, tosses notebook pages into the air!!]. Well, regardless, it’s good, ’cause great minds think alike- Check out a Brief History of Lesbian Moments in Music Videos. (Look, we even have pictures for it [see, right]!)(@afterellen)

90210: 90210 has started filming the lesbian scenes, ’cause it’s making headlines again: Rumer Willis Takes on role as lesbian student on 90210. ‘This is a real aspect of teenager life that’s interesting. There’s been a real void in the 90210 universe in terms of gay and bisexual characters.” (@daily mail)

COVERBOY:“It’s been said that if you ever want to hear people’s meanest thoughts, you should just allow them to post anonymous comments on the internet.”: Levi Johnston is Fat and Boring, Says Internet. (@carnal nation)

GAGA: It’s not the first time Lady Gaga has spoken out against homophobia, but every time she does we love her a little more. Says Gaga: “I feel even just in the music industry that there’s very public misogynistic and homophobic behavior. When I hear one of the most famous rappers in the world say something homophobic on the radio, I want people to yell at him. I don’t have to say who because they know who they are. It’s not just hip-hop, it’s everywhere. It’s wrong. I’m not trying to create and generate more hatred in the world…I just want to generate awareness. It’s always wrong to hate but it’s never wrong to love.” (@theadvocate)

ALSO SPEAKING OF LADY GAGA CAN WE TALK ABOUT THIS PLEASE:

Also also, Carlytron produced this segment with Gaga on Logo’s PopLab, which will air tonight, and obviously we’re very excited about it:

TUCKER MAX: …is sad because his movie isn’t doing well. Hold on, I’m making my “surprised” face. But seriously, the way he talks about how wronged he’s been is so crazy it’s fascinating. “This movie, if we had sold it to [FOX] Searchlight, they would’ve put Seth Rogen and Dane Cook in it, and they would’ve cut all the f*cking balls out of the jokes, and they would’ve brought in some sh*t bird to rewrite the script who would’ve had Tucker have a girlfriend and this and that, and then it’s like they own everything, they may have fired me… I would’ve stabbed somebody if they had done that.” (@gawker)