Five months after its first-ever female fight, the Ultimate Fighting Championship is hitting another milestone: the first fight between two openly gay athletes. Liz Carmouche, who put up a hell of a fight but ultimately lost to Ronda Rousey in February, will take on Jessica Andrade this Saturday in Seattle.

Both are relative newcomers — Carmouche, a former Marine, began her professional Mixed Martial Arts career in 2010, while Andrade went pro in 2011 and is the youngest female in the UFC — but given their powerful performances so far, this fight looks to be a fierce one.

Although they’re both gearing up for Saturday’s fight, the fighters took some time today to answer a few questions for me via email. We covered training hard, being a role model and why two women beating each other up may be the most awesome sport in the world. 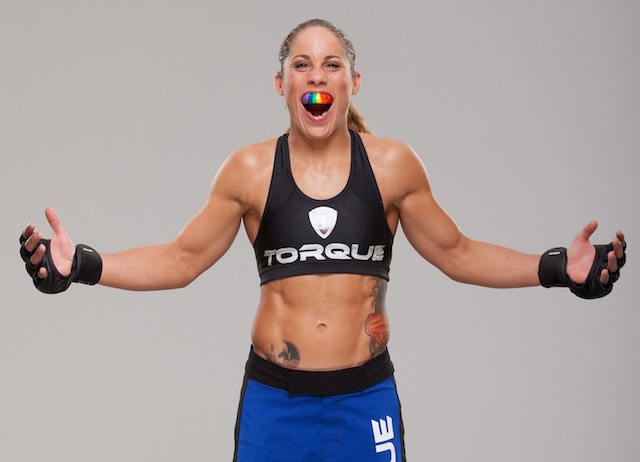 How did you get started with Mixed Martial Arts? What attracted you to the sport?

Carmouche: I was always an athletic kid, I played soccer and other sports when I was young and had to play with the boys because the other parents said I was too rough to play with the girls. But I only took up MMA because once I left the Marines I wanted to do something challenging and active.

I went down one day to the San Diego Combat Academy to try it out, they put me in the ring to spar, I got my nose all bloody – and I was hooked. I fell in love with the sport that day and I’ve trained almost every day since.

Andrade: I became interested in martial arts at school. There was a judo class for students and I really wanted to take part in it, but I wasn’t old enough. This was only three years ago. So I asked the teacher if there was any other class I could take and he said he taught a Brazilian jiu-jitsu class for my age group at a local gym. So I ended up doing that and I loved it. A few months after starting jiu-jitsu there was an opening at a local MMA card and I was invited to fight — I had a week to train basic striking. Even with little preparation I ended up winning and I loved it. I haven’t stopped training and competition in MMA since.

What’s your favorite part of MMA?

A: I love that it is you against one person, by yourself. You make it happen yourself. And there is so many ways to win or lose at anything, like chess. 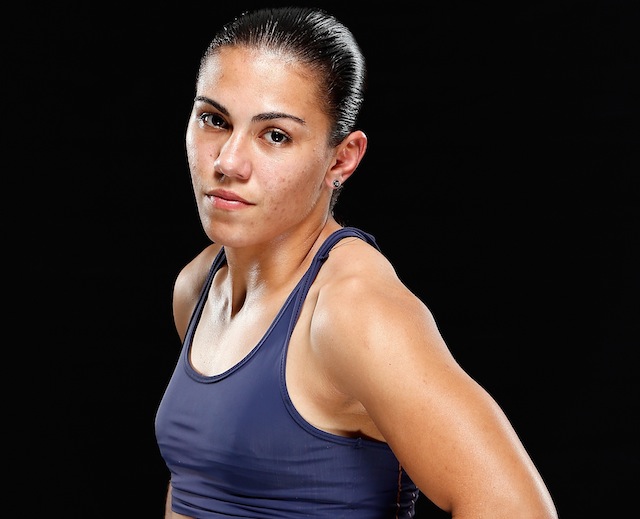 Aaaaand this is Jessica Andrade. I wanted to show you the abs. I really did.
via UFC

This is the first women’s UFC fight between two out lesbians. What impact do you think that will have on younger athletes who are also LGBTQ?

C: Jessica is in the UFC because she’s one of the hottest prospects — male or female — in the entire sport. They didn’t match up together because we are both gay, we are matched because it will be an exciting style which will see one of us get closer to a title shot. But, at the same time, it is great two lesbian athletes are on FOX – national TV – and I hope that LBGT athletes out there can see that there are sports and people in sports who don’t care who’s gay or not gay, and that the only thing that should matter in sport is hard work. I hope anyone out there who is a coach or a team captain looks at us and thinks, “Well, maybe someone being gay or not doesn’t matter in sport.” It is those little differences that eventually change people’s mind.

A: I don’t want to force anyone into being or doing something they are not. Everyone has to choose how to live their own life. I believe everybody has to the choice to do what they believe is right in their hearts. On the other hand I believe gays and lesbians in the public eye today can help show everyone that gays and lesbians are regular people just like anyone else. We are sort of the front-runners, if we are seen to be just ordinary people, then maybe everyone comes to understand every gay and lesbian is just like them.

More generally, how do you think being out as an athlete affects sports culture? Do you feel comfortable being a role model?

C: I respect anyone who is out in sport. The world is changing for the better, but we are not there yet and anyone who lives their lives in public has to be respected for inviting that kind of attention on themselves and their loved ones.

I don’t think anyone should be comfortable with the label “role model.” We all make mistakes in life. What I try to do is provide an example of a gay person who is not prepared to live a lie, and if that encourages others to come out or shows homophobic people that, hey, maybe gays aren’t so scary, that makes me proud.

A: Yes and no. If my fighting on TV makes people think, “Maybe there’s nothing to be afraid of” in coming out, that’s great. But people have to make their own decisions. Brazil is a very Catholic country and I have faith too; I know what I am and everything in my life comes from God. I’ve been in some unfortunate situations because of who I am, but the positives outweigh the negatives. I always knew since I was a kid what I was and what I wanted in a partner. I only came out in my teens when I started having relationships. I have a girlfriend and, on August 2nd, we will be celebrating being together for two years. I never really kept this as a secret from anyone — I have always been open about it.

Liz, you were the first out UFC fighter, but you came from a Marine background where you were forced to be in the closet for a long time. How have things changed since you left the military and were able to come out as gay?

C: So, when I came in to MMA, I wanted to be open from the start. I never wanted to live a lie like that ever again. From what I hear from friends who are in the military now, things have gotten a lot better as a whole. But, like I said, I always felt that even under DADT it all depended on whether you were serving with people who were homophobic or not.

Jessica, you’ve had almost the opposite experience — You say you’ve always known you were gay and never hid your sexuality. Do you think being gay has affected your experience as an MMA fighter at all?

A: I’ve always been open. In MMA, no one so far has cared about me being a lesbian. I think the way the fans and the media welcomed Liz into the UFC as the first openly gay fighter was very encouraging. It was great to see everyone judge her as an athlete and a good person and not on anything else. 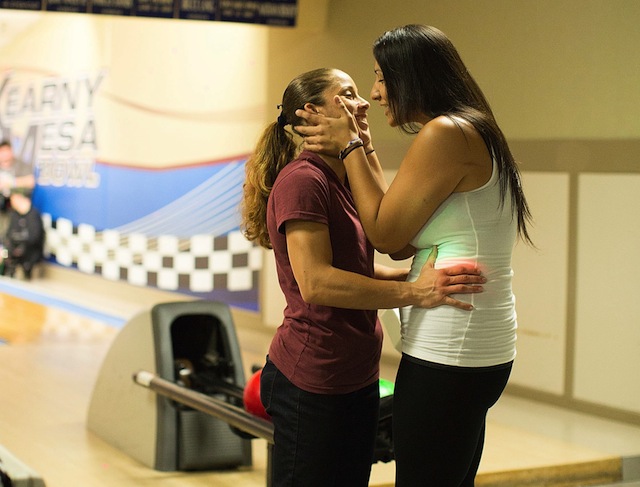 Carmouche and her girlfriend, Elisa Lopez, being adorable in a bowling alley. You’re welcome/I’m sorry.
via UFC

How do you feel going into this week’s fight? Do you do anything special to prepare before a big match like this one?

C: I feel great. In my last fight, in February, I challenged for the UFC world title against champ Ronda Rousey. I gave her a good fight, and took her back which means I had her in a position where potentially I could have won, but she got the better of me. That fight showed me I was close enough to being the best and what I needed to improve on.

A: This is my first fight in the UFC, which is like getting to the World Cup or Super Bowl for MMA fighters. I’ve trained harder than ever to be ready for this fight. I set a very frenetic pace and will be looking to finish the fight from the very start.

What would you say to someone who’s tuning in who has never seen an MMA fight before?

C: My fight with Jessica is almost guaranteed to be a war. We both have very aggressive styles, and it will be a great match. MMA has some of the best trained athletes in the world [because] we have to be experts in five Olympic disciplines — boxing, Greco Roman and Freestyle wrestling, judo and taekwondo — plus Eastern martial arts like karate and Brazilian jiu-jitsu. There are so many ways to win and lose, anything can happen at any second. I think it’s the most exciting sport in the world.

A: I promise you this will be the most exciting sport you have ever seen. Check it out and I know you will love it as much as I do.