Last week I met with my roommates in this underground bar somewhere in Manhattan. If I were an actual New Yorker, or someone who had lived here for more than three weeks, I would be able to remember the street name or at least the address of this bar. I wish I could be like every single New York (or New York based) writer I’ve read and throw around place names like I’ve forgotten that not everybody knows New York is the centre of the fucking universe. I haven’t been here long enough to forget though, and New York is not the centre of the universe, but I’m happy I’m here.

However, I have no trouble remembering the decoration. There was a old pink love-seat — the kind you’d imagine Barbie would lounge on if Barbie were a British aristocrat in the 19th century. The lights were dim and the drinks were so expensive I only had water. I sat on a long wooden raised bench with my two roommates and listened as one of the evening’s performers, a Scottish musician, sang of home and moving West to America; and of course I teared up a bit. I’m from “The West,” not the general West the singer was evoking but the Canadian West: Alberta; oil and cowboys and the tar sands and the river valley and the biggest mall in the universe and love and contradictions and winter and temperature in celsius and family and home.

A friend once said that I’m kinda like a turtle; not that I’m a shrivelled up, green-hued specimen of a girl, but that I can carry my home with me wherever I go. But I think that’s too simple to be true. Carrying this one home with you everywhere you go sounds pretty tiring, doesn’t it? To me that sounds heavy, back-breaking. It’s easier to feel at home in various places if you destabilize the notion of home like I destabilized gender and sexuality in women’s studies classes. What is home? If Judith Butler wrote a book and called it Homeward Trouble would she say that the concept of home and the rituals associated with it were performative and exist to give us a false sense of security and comfort? Is home masculine? Is home feminine? Is home in the body or is it outside of it? Is home my iPhone because I take it everywhere with me? Is home the internet because that’s where I can live with my friends and family all at once, wherever I go? The thing is, if you’re not too attached to one definition of what home is or what it’s supposed to be, it can be anything, which allows you to feel at home anywhere. 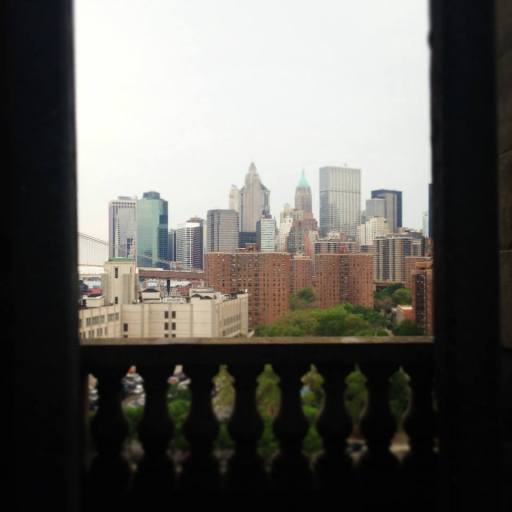 New York isn’t familiar enough to be home yet. Like I said, I still haven’t gotten all the neighbourhoods down; but that night last week as I sat in the Manhattan bar listening to the Scottish singer sing about Scotland while I thought about Alberta, I realized this could be home. Maybe. I feel comfortable enough with being uncomfortable in a new place that this place doesn’t always feel so new anymore. I think in Alberta, and in Canada as a whole, and maybe in other places of the world too, there’s this sense that New York is the Cool Kid in the global schoolyard. Until recently, I’ve had this grudge against New York because I’ve never been part of the Cool Kid Group. When I first arrived, I admit part of me was thinking, “Hey New York, just cause you wear these cool designer bridges across your rivers and you’ve got some graffiti on your interesting architecture, doesn’t mean I have to like you, okay?” But I do like New York in spite of myself. I’m realizing it’s not New York’s fault it’s so cool. It’s not a city that puts on airs. New York is actually just an authentically pretty cool place, and that doesn’t mean other cities aren’t as interesting. They’re just different. Just like it’s important for me, right now, to have different definitions of what home means, I want to have a multiple ideas of all the various aspects that make a city what it is so I’m not always comparing one city to another (one home to another) but measuring each place on its own unique qualities. That’s easier said than done though. After all, it’s human nature to compare one thing to another, and I’d be really boring if I didn’t have any opinions based on things I’ve seen and places I’ve been before.

There will always be tension between the notion of home being the place I was born and grew up in and the place I’m currently living in. I’ll always feel a desire to both compare a city to another and to let it stand on its own foundations. Maybe it doesn’t make sense. Maybe it does? Maybe I’m not making sense. I’m a weirdo-wanderer, but as I sat in that underground bar with Barbie’s divan and the long wooden bench, the dim lights, and the Scottish singer setting the idea of home to a guitar and a microphone, I felt okay with myself, okay with all the tensions, and okay with New York. I felt at home in Manhattan, at home in my thoughts of Alberta, and at home in that bar with my glass of water and my roommates.