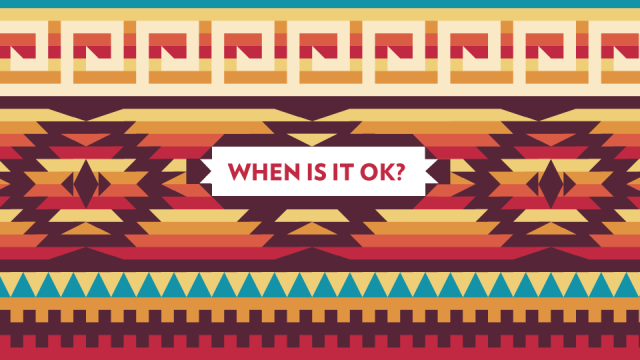 This fall alone, Paul Frank served “Rain Dance Refresher” cocktails at a “Pow Wow”-themed fashion week event, ASOS debuted a “Go Native” Navajo-inspired line with cringe-inducing copy, and Karlie Kloss walked the Victoria’s Secret Fashion Show runway in a floor-length war bonnet and not much else. Why are fashion brands so bad at discerning the difference between cultural appropriation and appreciation — and, moreover, why don’t they care about putting in enough effort to get it right?

Fashion brands are often quick to apologize after appropriation-related controversy ensues; most recently, Victoria’s Secret released a statement this week “sincerely” apologizing “as we absolutely had no intention to offend anyone.” Apologies are nice and all, but they’re not enough; how is it possible that, in the year 2012, no one at VS thought twice about how Kloss’s “sexy native” get-up might upset people? We could lament (and recently published an article on) how frustrating it is that so many companies clearly don’t feel the need to take the time to do basic research before launching offensive clothing lines and ad campaigns. (And sometimes they veer into illegal territory; remember when Urban Outfitters got in legal trouble for its tacky “Navajo Hipster” line of panties and flasks?) But we’re also interested in how consumers can shop responsibly, since it’s not always so obvious when a company is making a profit off an artificially constructed image of Native American identity.

A personal example of appropriation confusion: I love the concept of dreamcatchers, and have one hanging on my window; I also bought tiny dreamcatcher earrings from a Navajo woman when I recently drove through Navajo Nation on a road trip. Am I unconsciously promoting cultural appropriation because I like the way webs and feathers look dangling from my ears? I really wasn’t sure — and none of my friends or coworkers seemed sure, either. So we talked to a variety of experts, from Fordham University Law professor Susan Scafidi to Beyond Buckskin’s Dr. Jessica Metcalfe, in hopes of better understanding the legal and more “thoughtful” differences between offensive appreciation and positive inspiration.

(We’re focusing on Native appropriation in particular, because, judging by the past few months alone, that’s the fashion industry’s favorite culture to mock/steal from first and apologize for later. But the below guidelines work for other cultures, too.)

What is cultural appropriation?

Scafidi, the author of Who Owns Culture? Appropriation and Authenticity in American Law, said even she found it hard to give a succinct and clear definition. Here’s what she’d go with: “Taking intellectual property, traditional knowledge, cultural expressions, or artifacts from someone else’s culture without permission.”

To elaborate: “This can include unauthorized use of another culture’s dance, dress, music, language, folklore, cuisine, traditional medicine, religious symbols, etc. It’s most likely to be harmful when the source community is a minority group that has been oppressed or exploited in other ways or when the object of appropriation is particularly sensitive, e.g. sacred objects.” 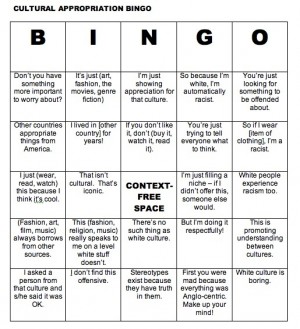 Metcalfe recommended Native Appropriation’s “Cultural Appropriations Bingo Sheet,” which she shows in her classes at Arizona State University because it “seems to make people laugh and helps to make cultural appropriations ‘click’ in people’s minds.”

Why is it such a big deal?

In their own words:

“There isn’t just one Native American culture. There are hundreds. And there are millions of Native people. And we’re being ignored. We’re being told that we don’t have rights over how we are represented in mainstream America. We are being told that we should ‘get over it’ – but the people who are saying this don’t even know what the issues are. When people know of us only as a ‘costume,’ or something you dress up as for Halloween or for a music video, then you stop thinking of us as people, and this is incredibly dangerous because everyday we fight for the basic human right to live our own lives without outsiders determining our fate or defining our identities.”

“When modern Natives see half-naked chicks strutting around on runways or street corners completely devoid of knowledge of our real cultures and religions, AND misrepresenting and misappropriating these sacred symbolic articles, we must demand respect for our religious practices. Such misrepresentations sexualize, commodify, and pervert our traditions — and impart to children of all cultures and backgrounds that it’s perfectly acceptable to “play dress up” as a Native person, without regard for our ceremonial practices that have persisted here for millennia despite historic violence, and recent legal acts that literally outlawed our religions until 1978! Our ancestors and our parents survive attempted genocide (for their lands) and severe discrimination (for our languages and spirituality). So to pretend that we’re fictional characters vs. real people from real cultures is not only offensive, and racist, it’s a vicious act suppressing our lived realities as Native peoples, and an appropriation of our very identities.”

Are there any legal ramifications?

Sometimes! A few tribes have taken advantage of trademark law, like the Navajo Nation — that’s why they were able to send Urban Outfitters a cease-and-desist letter. You can use the Trademark Electronic Search System (TESS) to search the 500+ tribes to see if they’re trademarked.

But some tribes don’t want to trademark their cultural property because, as Scafidi explains, “the requirement that U.S. trademark be used in commerce may itself be offensive if the name or symbol in question is something that is sacred, secret, or otherwise not an appropriate subject for commercialization.”

There’s also the American Indian Arts & Crafts Act, which makes it illegal “to offer or display for sale, or sell any art or craft product in a manner that falsely suggests it is Indian produced, an Indian product, or the product of a particular Indian or Indian Tribe or Indian arts and crafts organization.”

But most lucrative products aren’t considered an art or a craft, from cars (Jeep Cherokee) to mass-produced clothing (clothing designs aren’t copyrightable in the U.S. in general) which makes it easy for companies to shirk the law. Basically, if you’re not falsely suggesting that your items are Native-made, or the product of a particular Native Nation, you’re legally good to go.

Should non-Natives refrain from purchasing Native American made or inspired goods out of respect?

Not at all! Just make sure you’re doing it right.

“Consider the 3 S’s: source, significance (or sacredness), and similarity. Has the source community either tacitly or directly invited you to share this particular bit of its culture, and does the community as a whole have a history of harmful exploitation? What’s the cultural significance of the item — is it just an everyday object or image, or is it a religious artifact that requires greater respect? And how similar is the appropriated element to the original — a literal knockoff, or just a nod to a color scheme or silhouette?”

Tell me more about “source.”

“One important factor to consider is the role of agency and self-determination in the representation of Native peoples, culture and art. As sovereign Nations, Indigenous peoples have the right to speak for ourselves and not have dominant Euro-American society project and profit off of an artificial and socially constructed image of “Indian” identity. When you have major corporations commodify and take possession of various components of Native culture and intellectual property it speaks to the ongoing dehumanization of Indigenous peoples.”

How can I figure out if something is sacred and therefore off limits?

“Non-Native people can and should buy Native items from Native artists and designers. That’s why I created Beyond Buckskin and the Beyond Buckskin Boutique. It’s a place where people from all backgrounds can come and appreciate Native American creativity and design. Furthermore, the Native American artists and designers who I work with are members of their communities, and they are knowledgeable about which aspects of their cultures will never be for sale for sacred reasons (again, think of the headdress). So, the items for sale are created as non-sacred items to be appreciated by everyone.”

And/or do some research. Here’s a start: dreamcatchers aren’t very problematic. War bonnets (sorry, Karlie!) are, according to Weston:

“Dreamcatchers come with stories (sometimes from dreams) among several tribes like the Ojibwe, Navajo, and Lakota. Since they’re cross-cultural items and adapted for contemporary arts and crafts (w/ kids, and for sale) by multiple tribal artists and schools, there is less concern about appropriation. On the other hand, the plains Indian war bonnets that the ubiquitous hipster/Victoria’s Secret & other fashionista “feather headdresses” are modeled on are actual historical sacred ceremonial pieces, sometimes called regalia (but not costumes). While ceremonies varied among the diverse plains tribes who produced these headdresses, most involved specific prayers and actions, often relating to EACH single feather. Honor songs and ceremonies, for men and women warriors, come from our languages and represent ancient spiritual practices deeply tied to tribal homelands and their biodiversity.”

Brown pointed out some other items that you might not know are “much more than just visually beautiful”: turquoise squash blossom necklaces, beadwork, quill earrings, birch bark baskets and Dine rugs.

Hmm, this isn’t so tricky after all. Why are fashion brands so shitty at it?

Because they don’t care.

“For some reason, people think that our designs and patterns are in the ‘free bin’ and any one can use them to make a shirt, etc. This is false. Some of these are designs owned by communities, owned by families, or owned by individuals, and companies cannot steal them for profit. Yes you can be inspired, but inspiration requires some creativity and skill of your own.”

You would never copy a design from Prada — or, at least, you’d be pretty sneaky about it — but Urban Outfitters thought nothing of using the word “Navajo” to promote their hipster panties.

What should I do about my dreamcatcher earrings?

Scafidi told me I passed the “3 S’s” test, and therefore, her (very charming) advice “would be to enjoy the dreamcatcher earrings that you bought from a Navajo artisan, and — if style inspiration strikes — feel free to pair them with everything from a preppy polo to a mandarin-collared blouse,” said Scafidi.

But not if I only like them because they’re pretty.

“If non-Natives buy crafts, jewelry and clothing from Native peoples, it does not necessarily mean that there aren’t inherent dynamics of power and appropriation at play. A major issue to consider is the cultural and religious significance present in Native art, jewelry and apparel. Each tribe has unique and very specific meaning imbedded into their art, regalia, crafts and jewelry…Despite what dominant society and mainstream media say, Native culture is alive and present and if people are inspired by that they should take personal responsibility to educate themselves. If non-Natives decide to buy native art, they should wear or display it with respect for the culture it represents.”

In short: Don’t be scared off purchasing Native-inspired goods completely, but do some research before you buy — and, as a rule, stay away from items mass produced by fashion chains that seem more inspired by a mythical hipster Pocahontas than actual Native Americans.