I’m not a lesbian, but you know what? I sure do think lesbians are great. My partner, Sadie, is a lesbian. She’s the best. Many of the people I work with here, at this incredible queer indie media outlet are lesbians, and they are also great. You know what’s not at all okay, though? The number of holes in our house — that’s what! This isn’t the metaphorical house that is Autostraddle, no, this is the house that Sadie and I live in, and it has real (not metaphorical) holes! How’d they get there? Well, the thing is, it has to do with decisions made by the previous homeowners, but if we talk about the prior residents too much out loud, the hauntings increase in their activity. So, I’ll leave it at that.

So, from me to you, from one homo in a home just trying to have solid walls to another, I am asking: will you consider chipping in $5 or $50 so we can get to the finish line? We’re almost there and each and every dollar makes a difference. Every cent goes toward filling holes in our budget so that we can keep this space here and pay our queer team — and then I can fill the holes in my house. Will you help?

I hope you did help and thank you if so! Onward!

Firstly, Some Proof of Our Repair Work

Sadie’s an excellent forewoman and has one of the steadiest hands with a paintbrush you’ve ever seen. I am a beast at demo and pretty speedy with a drill — and together, we just get it done.

Why so many holes? It was the place we could afford and that’s how it works sometimes. All we need is time. But unfortunately, we at Autostraddle are understaffed, we still need to find an ad sales gay, and we are still running a fundraiser which has me working 8:30am-11pm weekdays and like, 9:30am to same on weekends, but with a lil break in the middle of the day on weekends so I don’t immediately blip out of existence. As it is with Autostraddle, so it is at home — if it’s one thing we’re in need of, it’s not skill, it’s hours in the day!

Here are some before and after pics of a particularly tricky plaster repair we refer to as: “Those corners weren’t there before.” 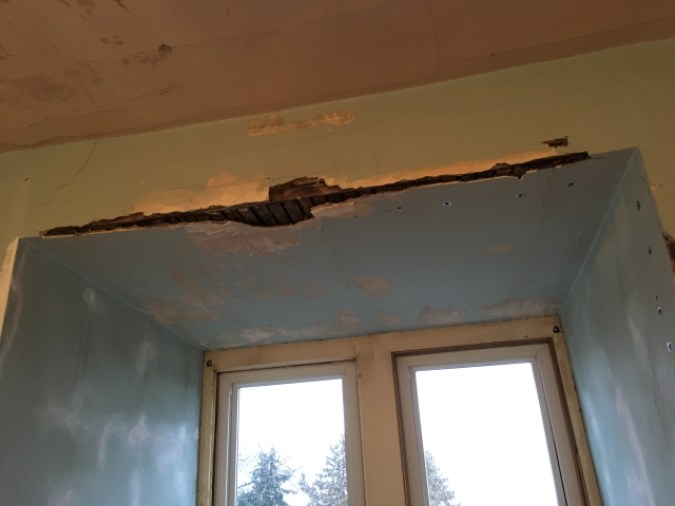 That wood lath’s 100+ years old and had soot coming out of it! Neat! 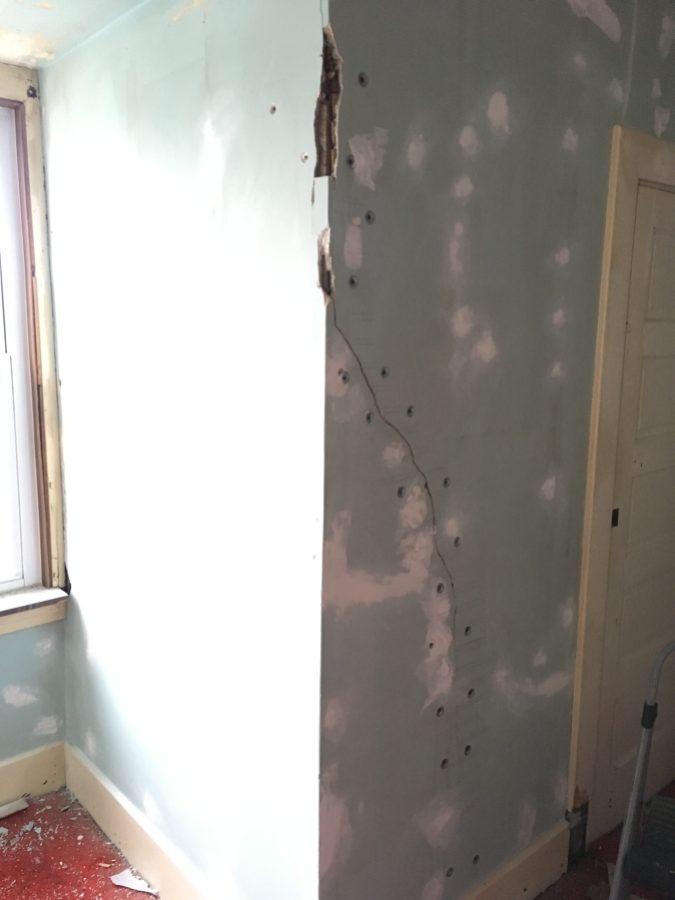 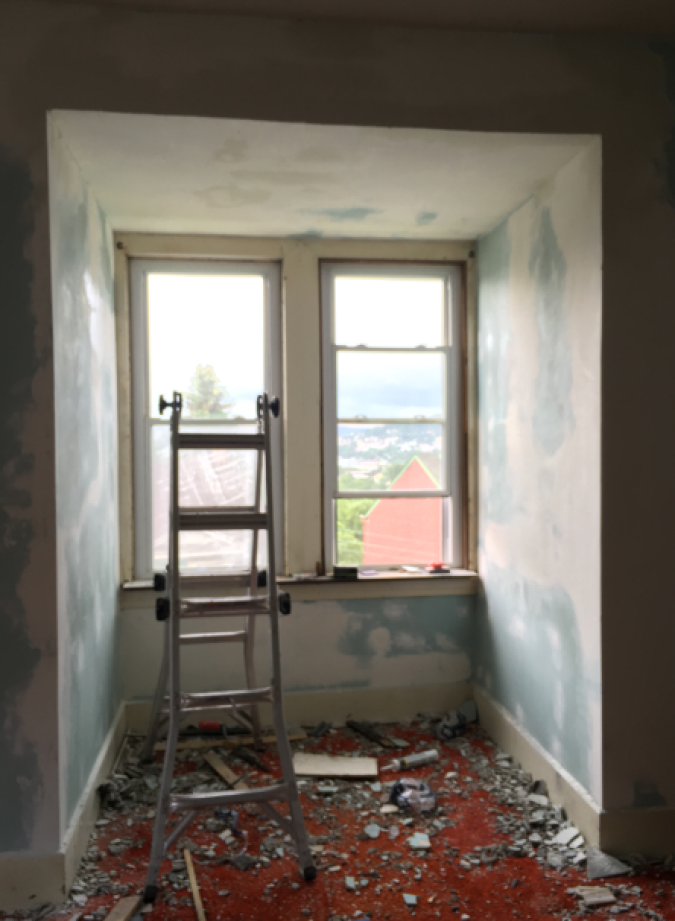 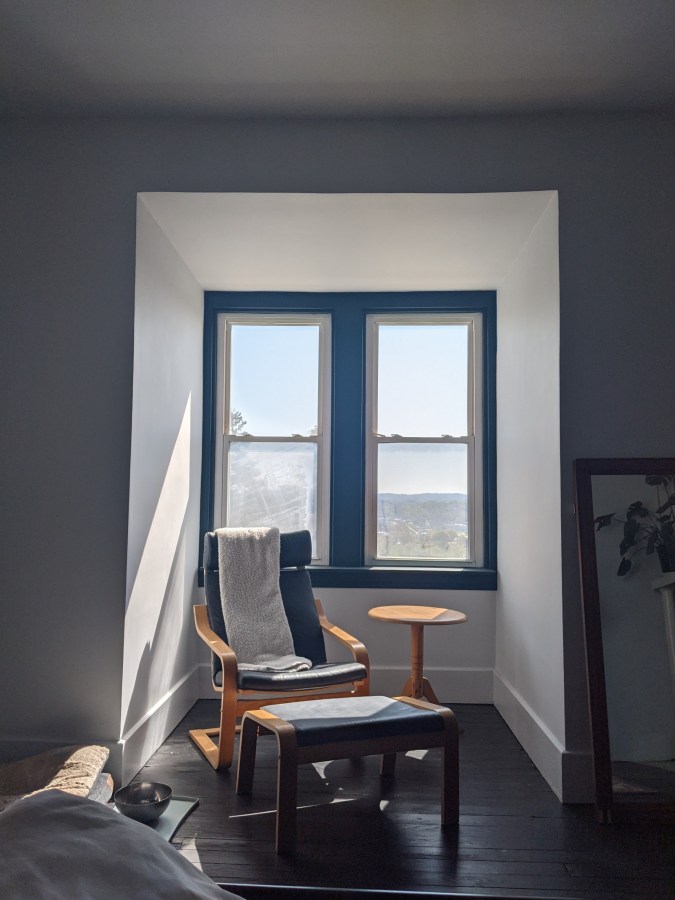 I would like you to know that Mya the dog has actually claimed this nook as her own and used her butt to push all the furniture against the walls, so it no longer looks this tidy.

And Now… Holes in My Haunted House, Ranked by Lesbianism

9. The Holes of Dirk 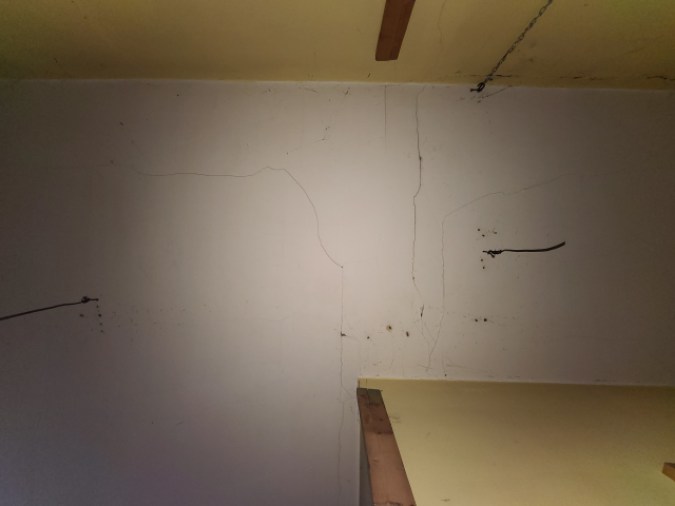 Ahem. See those several lines of holes? The ones that look like fucking constellations? Those were done by a man who seemed to believe in some kind of drill-to-find-stud method. These are everywhere. The man never marked a spot with a pencil and drilled just one hole for a one-hole project in his life. The worst. How do I know his name is Dirk? He wrote it on the wall behind some wood panelling in Sharpie. That took multiple coats of primer before it stopped showing through. These holes are the mark of someone who was not careful, who did not even attempt good craftsmanship, who was not thinking of our collective queer future — literally the least lesbian energy I have seen in just about anything. 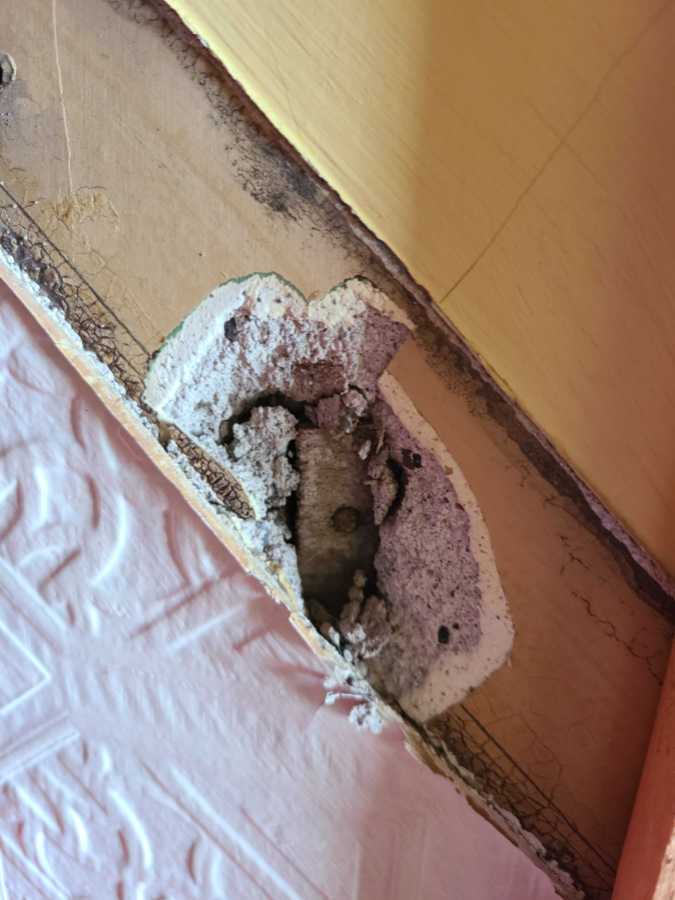 This hole is dainty, but not in a high femme way. No, this hole is giving me straight woman energy. 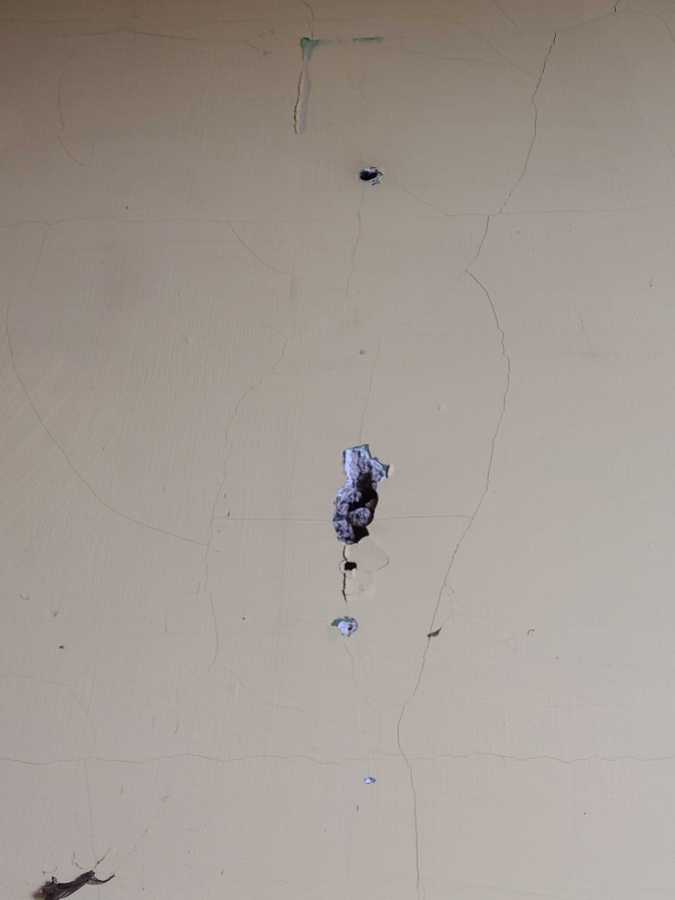 When you look at her from across the room, she winks! Should I read more into it? 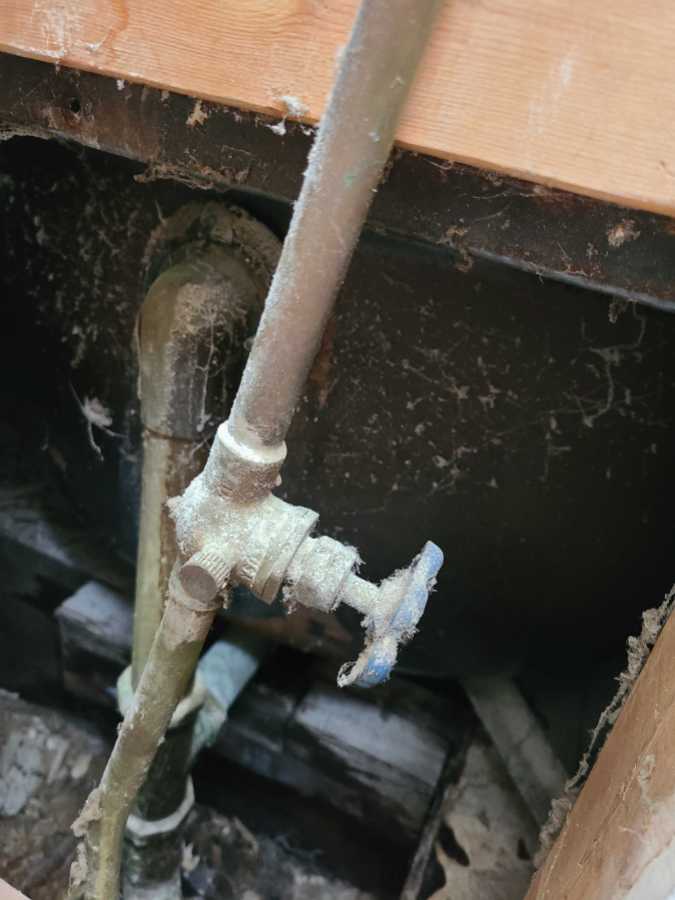 Sarah noted that this hole had lesbian energy because of the film, Bound, which is in fact a trans classic. This is an accurate assessment! 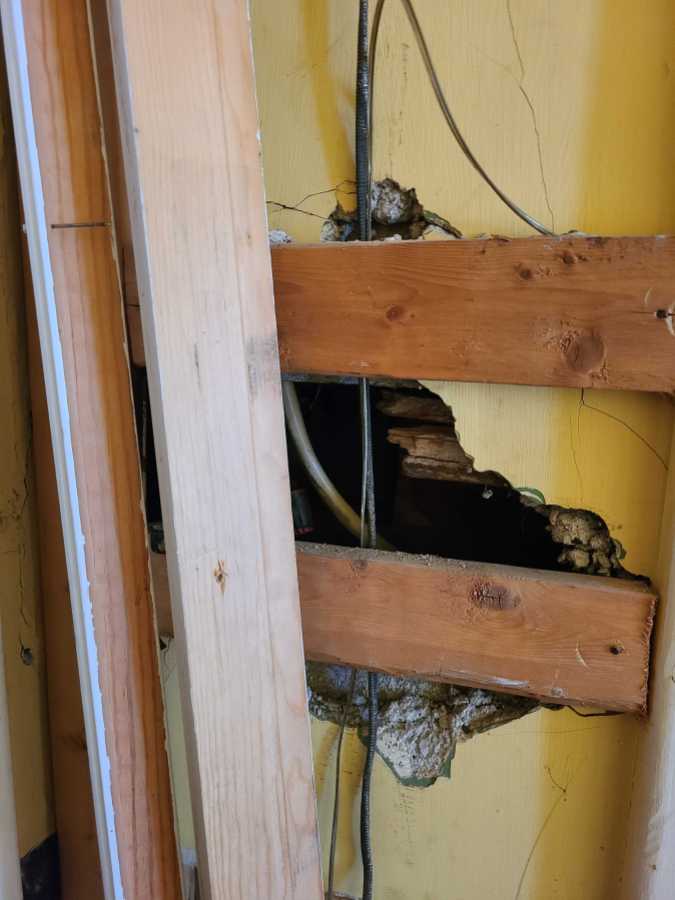 Oh my, those wires! Some serious mxtress energy coming from this hole.

4. The Time I Was In a Hole That Led to a Whole Extra Two Feet of Ceiling Height 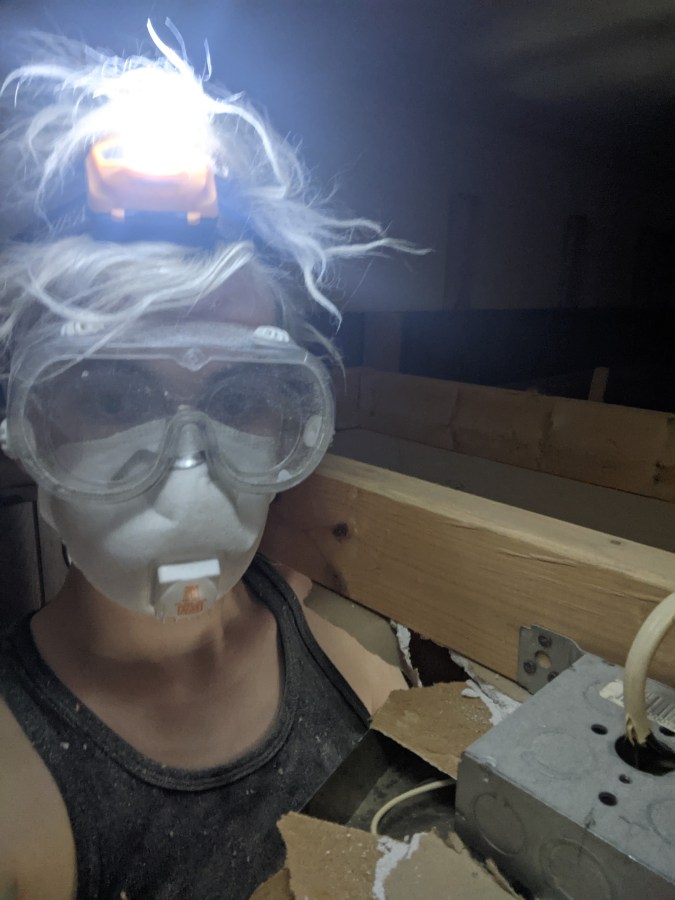 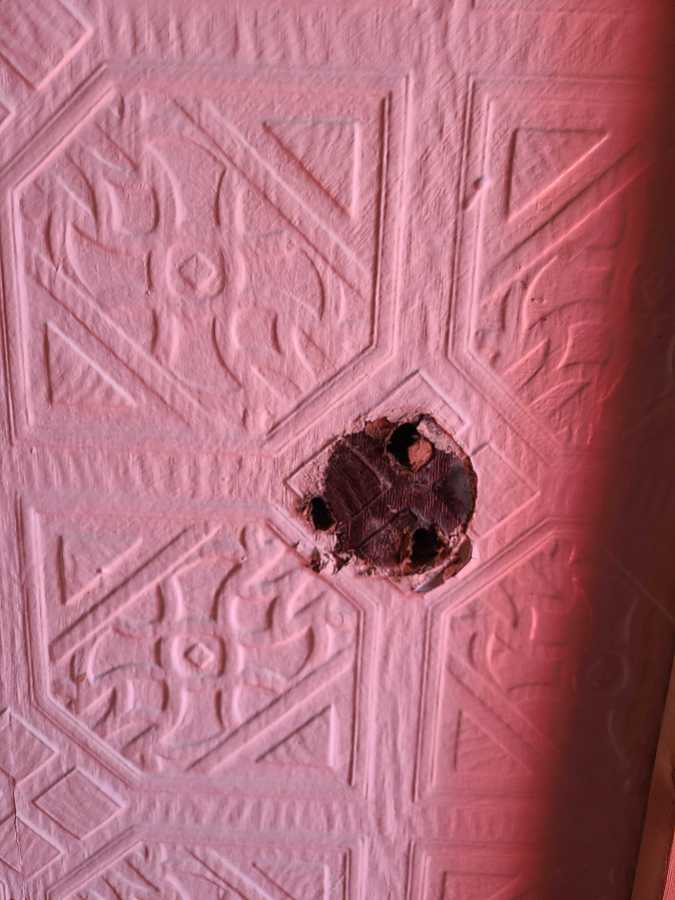 These holes are just waiting here for a railing. I will not say more.

2. This Hole Repaired by an Actual Lesbian 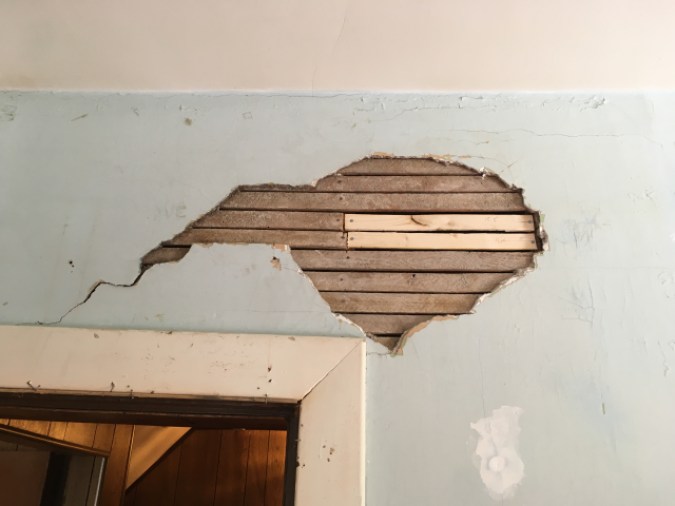 Sadie replaced some lath that had disintegrated. So handy! This is some peak lesbian hole business, truly.

1. This Hole That Led to the Discovery of a Hidden Staircase 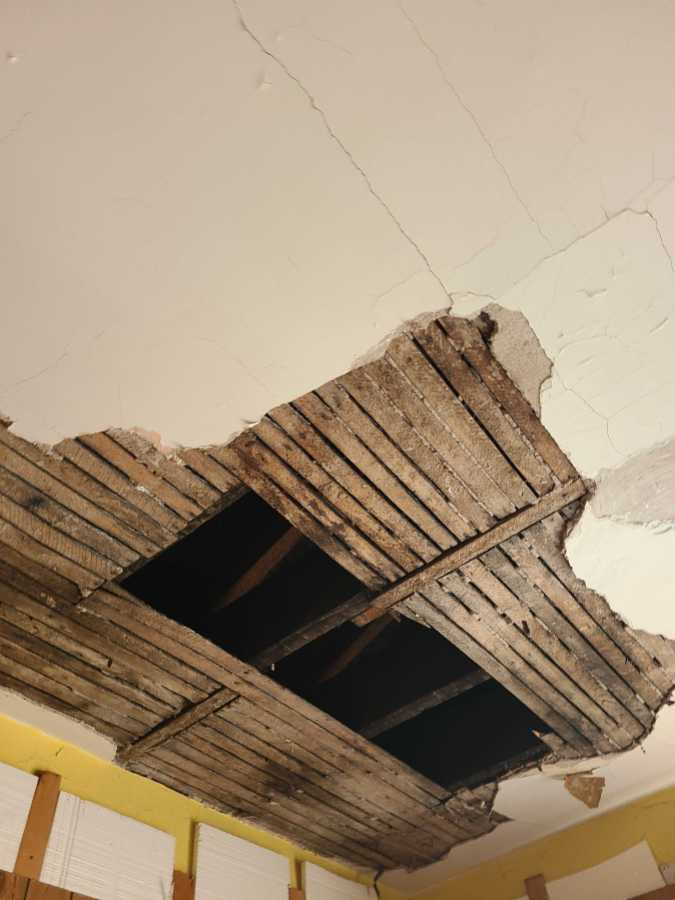 Besides the fact that this hole is clearly very daddy, this hole also has secrets to reveal. And listen, secrets — secrets in attics, secrets in staircases, century-old secrets — this is the stuff of lesbian culture.

Before climbing up into this hole, Sadie and I had wondered where the attic access was. We had never been able to find it! When we got our heads and shoulders up into this hole, we could see that across the attic, in just the space it should be, the joists were cut away, indicating the presence of a staircase, the entrance to which is sealed behind plaster in my closet.

This is funny because when I was tearing wood panelling out of this closet, I could smell a scent I know you’d recognize. The best way I can describe it is ancient grandma attic. Do you know what I’m talking about? I expected to find an access to said attic when I removed the wood panelling, but there was only plaster. I ran my hands over it and checked the corners and could not find the way through. It was so weird! Well, this hole has told us that for some reason, back when plaster was still in use (a quick Google search tells me drywall became popular in the 1940’s), they sealed this attic off completely. We have yet to cut a new access hole and to ascend the staircase, but if you want you can follow me on Insta and I will very likely post it when we do.

Also, I was right! The access to the attic should be in that closet.

There you have it. This is the top lesbian hole in our house. And Sadie and I can do nothing about ANY of these until Autostraddle reaches the conclusion of our fundraiser.

So, I implore you to please spread the word far, spread that word wide, because where else on this internet will you find lists of anything ranked by lesbianism. We love you, and we want you to know that even $1 helps. And if you can’t support, that is okay. Autostraddle is majority free-to-read because we don’t think you should have to have money to read us. We want to be here for everyone who needs this queer space, and your gift helps pay that forward. Thank you for anything you can do.

Nico has written 97 articles for us.