By now everyone knows that the world of music recently exploded because Justin Timberlake and Destiny’s Child released new things. I’d say music but Justin’s first video was on some weird look-at-me-being-deep shit but you know that boy has soul so whatever. Really though, all I care about is Destiny’s Child because from them came Beyoncé and by now you should all know how I feel about her. Google Beyoncé + Autostraddle if you don’t believe me. 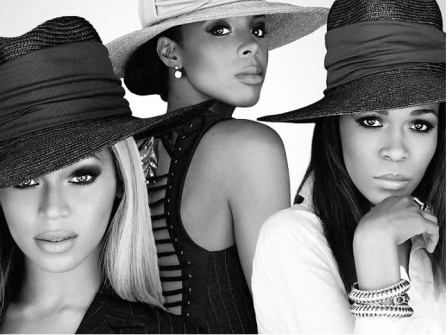 This is apparently the official “we just put out a new song” picture.

Anyway, back to new music and stuff. Destiny’s Child put out “Nuclear” last week. The song makes me feel like it’s 1994 and En Vogue is going to do a guest spot on this track. I’m also waiting for Salt n Pepa to rap somewhere in the middle of it while everyone does the dance to “If” like Janet Jackson. Basically, I kind of love this song already. But I’m an elder queer, what the hell do you ya’ll think about it?

In honor of new music from Destiny’s Child and to commemorate their alleged reunion at this year’s Super Bowl Half Time show and their super fly, body for days, deliciously camp everything:

7 Videos That Have Something
To Do With Destiny’s Child

I hereby proclaim this video as winner of the “Even Girl Groups Get a Hood Pass” Award.

Destiny’s Child sang a made up word and no one dared to check them.

Can you pay my automo bills?

What’s better than an impromptu dance-off?

An impromptu dance-off that pits

Because nothing beats a cute chick playing a ukele while singing a Destiny’s Child song.

Nothing. Not even kittens.

They were right. We were never ready for all that jelly.

But please sir, can we have some more?

So any thoughts on “Nuclear”? Or any of the videos posted here? Is there a Destiny’s Child related video out in the world that needs to be on this list? Something the world hasn’t seen yet? So many questions and only three members of Destiny’s Child left for the world to enjoy.