These portraits were taken originally for Hunger Issue #5, which is at this point many years old; I’m not sure why I am only just seeing them this week, except perhaps that a higher power was protecting my innocence and the fate of my soul. Both of those were already shaky at best; although raised in a nominally culturally Catholic family, I was never baptized or confirmed and have never attended Mass regularly. If I had at least been baptized, I would have at least the chance to have my moral plate wiped clean before dying with the blessing of a priest and any sins I’ve committed, including confusing spiritual and base physical feelings about 90s breakout television stars, would be forgiven. Unfortunately I was not, and so that is all shot to hell. Pursuant to that reality, I’ve done the math on all the sins I’ve committed via looking at these photos and should go to confession for if I want to get right, drawing heavily from this DIY pamphlet of “sins that need to be confessed” as well as this helpful guide for self-assessment of exactly how much you’ve sinned since, as previously established, I do not have a priest.

Yes, absolutely. Enthusiastically and without question. Once I finish writing this post I will probably go on to commit more homosexual actions in relation to this entire situation as soon as the tab is closed. Related:

5. “Blasphemy: disrespect toward God or toward His Holy Name”

6. Blasphemy specifically related to involvement of a rosary

Separate from the overall blasphemy inherent to this situation — certainly a very real and spiritually endangering one, not trying to make light of it — there’s the discrete issue of rosaries. The prayer bead necklace preferred by the Catholic Church and upon which one may perform any number of rote prayers in a dizzying number of combinations at the behest of a priest or just for kicks, the Church is kind of judgy about how the rosary is used. As this Catholic website explains:

“The closest resemblance to a norm on this topic is found in Canon 1171 of the Code of Canon Law. To wit: ‘Sacred objects, set aside for divine worship by dedication or blessing, are to be treated with reverence. They are not to be made over to secular or inappropriate use, even though they may belong to private persons.’

It is with a heavy heart I admit that Gillian Anderson running a string of rosary beads through her lips like a goddamn cherry stem in a dive bar is probably “inappropriate use,” and my personal and private feelings on her doing so are even more so.

“Did I have false gods in my life that I gave greater attention to than God, like money, profession, drugs, TV, fame, pleasure, property, etc.?” the website for a Catholic church based in Picayune, Mississippi encourages me to ask myself. What qualifies as idolatry is a matter of much abstract theological debate in many religions; in Catholicism it’s tricky because icons, statues, prayer cards and saints, things which would look a lot like idolatry in most other religions, are totally chill. However, in general treating any non-God entity with the level of worship or adoration that God might be due is considered a nonstarter (ex. The golden calf situation). In an extreme simplification, “honoring” other entities, like saints or like impeccably aging American-English TV, film and stage actors, is fine whereas “adoration” or “worship” are only for God/the Holy Trinity. Which am I doing right now? Will wait for the Vatican to weigh in.

In an ironic twist that’s a pretty solid case study of Catholicism for anyone unfamiliar with its nuances, it’s actually a sin to lose faith that God will forgive you on account of how sinful you are. My baseline, lowgrade background drone of irreparable sinfulness is probably based on a number of factors — internalized biphobia, childhood trauma, watching Stigmata (1999) too many times as a pre-teen — that realistically predated finding a photoshoot of Gillian Anderson holding a rosary lightly between her teeth with a glazed expression like she’s taking communion or really anything else at all your imagination can furnish, but let’s be honest, that last thing isn’t helping.

Thank you for your time! See you in hell, the road to which I hope is paved with the outtakes of this shoot. If any theologians or members of the clergy would like to weigh in on the fate of my immortal soul, I am all ears; I am willing to take any reparative action for my spiritual health up to and including lighting a votive candle down at the Basilica of Saint Mary. 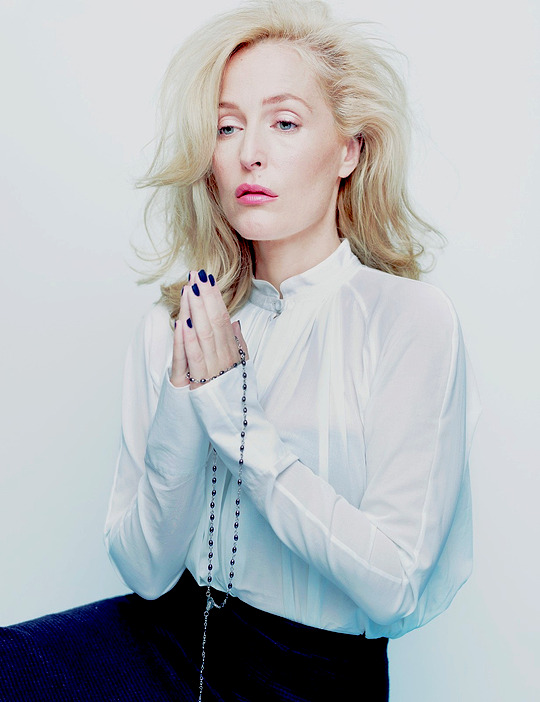 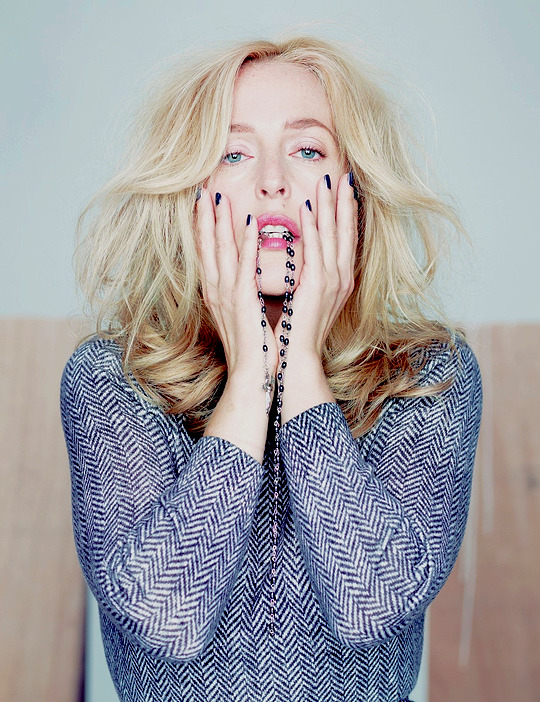