Recently, I discovered that the greatest love story of our time is hidden in an unlikely place: Payless’s BOGO commercials. Chances are if you’ve watched television any time in the past couple years, you know know the ones I’m talking about. Two women sit on a couch and scream about shoes and, more specifically, how you can buy one, get one at the Payless nearest you.

The mere premise of this commercial series raises several queer flags. These are two women who regularly shop for shoes together and share a seemingly unwavering love of shoes. Now, maybe I have a poor understanding of friendship, but do friends really shoe-shop together as, like, a recurring practically habitual activity? Shopping in general seems like a pretty platonic pastime, but shopping for something specific and repeatedly doing so together? That sounds intimate, strange, sensual. Shoe-shopping is no passive activity. Shoes are important! Shoes stay with you for a long time! Shoes are as personal and descriptive as perfume. Am I going too deep with this? Probably.

And for the sake of narrative simplicity and so we can all collectively come up with a ship name for them once I’ve sufficiently convinced you of their torrid love affair, I have given the Payless BOGO women names. Meet Caroline (left) and Tarah (right): 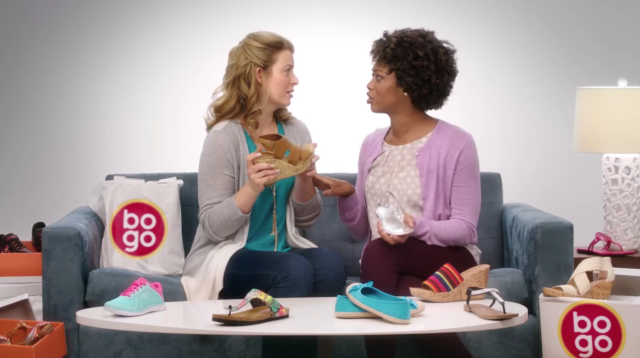 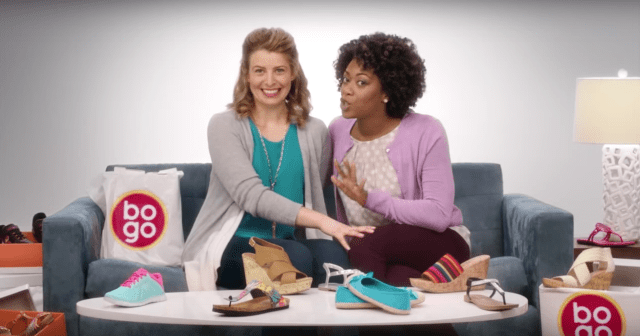 Note Caroline’s hand on Tarah’s leg. Note Tarah’s arm around Caroline. There is more physical chemistry oozing from this Payless couch than Fitz and Olivia have ever achieved in five seasons of Scandal. Also, while they’re snuggling up to each other in the commercial — which is the first to introduce Caroline and Tarah on Payless’s YouTube channel — they’re literally finishing each other’s sentences. “So, I needed shoes for work,” Caroline says. “But you wanted shoes for play,” Tarah finishes. HOW DOES SHE KNOW THAT? IT SOUNDS LIKE YOU ARE VERY INTIMATELY FAMILIAR WITH CAROLINE’S SHOE PSYCHOLOGY, TARAH.

You know when two people first start dating and they’re so obsessed with each other that they laugh at each other’s bad jokes and find each other’s very ordinary stories incredibly exciting? Caroline and Tarah are that couple. “Tell the story again!” Caroline begs at the beginning. Please don’t, Tarah! It isn’t a good story! We already know how it ends! You bought one and got one at Payless! Only Caroline likes this story, because Caroline could probably listen to you talk about a speck of dust and find it beautiful, poetic, worthy of repeating over and over. Caroline, in fact, asks Tarah to tell the story again before the commercial ends. Get a room!

3. So much arm touching! 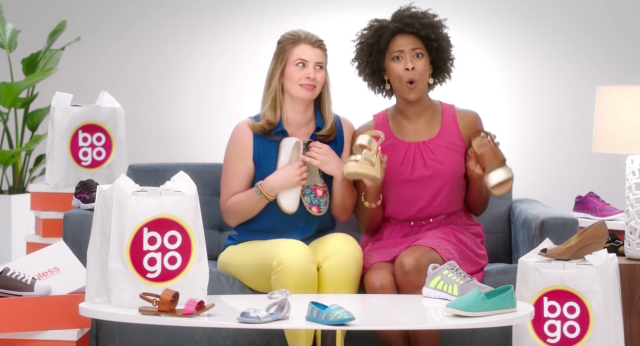 In the same commercial in which Caroline incessantly asks Tarah to tell the same boring story twice, there is a lot of “accidental” arm touching going on. It’s almost like Caroline and Tarah would cease to exist if they were to stop touching arms. There is a lot of room on that couch. Caroline could definitely scoot over so she isn’t constantly bumping arms with Tarah. But that isn’t what they want, is it?

4. They are definitely karaoke partners

Okay, so this one requires some speculation, but the one time Caroline and Tarah break out of their usual BOGO confines to advertise a general clearance sale at Payless, they make up a ridiculous song together (about shoes), complete with synchronized choreography (with shoes). These two have clearly done this before… at the karaoke bar perhaps? Caroline and Tarah have definitely dueted on “Take Me Or Leave Me” at karaoke.

5. They both love sandals and boots 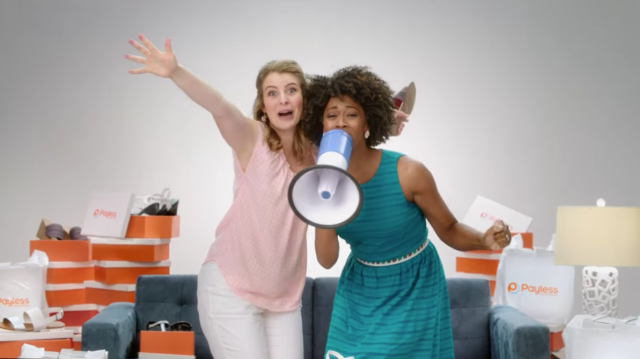 In several of the BOGO commercials, Caroline and Tarah are screaming about sandals and boots with equal enthusiasm, representing two very important parts of the Queer Women Shoe Spectrum. Sneakers also get a shout-out. The fact that Caroline has to flip a coin (well, she has Tarah do it for her) in order to choose between heels and boots seems like coded commentary all on its own. Might Caroline be a tomboy femme? And Tarah ultimately doesn’t let Caroline see what the coin landed on, flirtatiously snatching it out of the air and explaining that “the whole point of BOGO is not choosing.” Is this a metaphor for fluid sexuality? Please let me have this.

It wouldn’t be a compelling love story without a touch of drama. Somewhere along the line, Caroline and Tarah ran into some issues, but like good lesbian exes, they kept hanging out all the time, shopping for shoes like the good ol’ days and likely still saying “I love you.” They stayed together for the Keds! During this commercial for boots and this one for heels, Caroline and Tarah seem uncharacteristically disconnected from one another. Sure, they’re still finishing each other’s sentences, but they are barely looking at each other. The distance between them is gaping — no more arm touching! Then, Caroline gets real petty. “I love BOGO,” Tarah sighs in the commercial above. “Then why don’t you marry it?” Caroline retorts. Her cheery cadence is fooling no one! Did Caroline want to get married but Tarah didn’t?! Is that why they broke up?! Did Tarah’s love for BOGO grow so big that it started getting in the way of their relationship?!

The most recent BOGO commercial, released earlier in the month, suggests that they might still be going through a rough patch, as it devolves into them competitively trying to one-up each other with adjectives. Their subtextual breakup is as glaring as their subtextual romance, so I’ll just count it as further proof that the Payless BOGO commercials double as a lesbian love story, and I will continue to hold out hope that the next commercial in the series depicts their loving reunion.