Thanks to my girlfriend, Stacy, for helping me compile this list.

I have a very complicated relationship with the NFL. I think it’s a sexist, homophobic, crooked, jerky organization that rewards rapists, domestic abusers, child abusers, and literal dog murderers as long as the men who do those things can throw or catch a ball, or smash into people who can throw or catch balls. My girlfriend, though, she loves football. LOVES it. She watches nearly every game, every Sunday and Monday and Thursday night, all season long. She follows everything going on in and out of the Miami Dolphins locker room and on the field, can tell you when literally every player in every game passed through Miami and what coaching choices in Miami led to them failing as Dolphins, can barely keep her head from exploding off her shoulders when the Dolphins offensive coordinator calls a sweep or fade on third down (or in the red zone). She has a grey Dolphins hoodie that is so cute on her I can barely stand it.

In sickness and in health. For better or worse. For the off-season and in-season of American football.

Lots of other queer women I know have equally tricky relationships with the NFL. So, with the impending matchup between the Horses and Black Cats coming our way tomorrow, here are five apps that can make the your Super Bowl experience a more feminist one.

Katie Nolan is a feminist sports reporter who does a weekly Daily Show-style show called Garbage Time, during which she often calls out sexism and gross behavior in the sports world. Watch her awesome segment blow on the NFL’s first female coach, and follow her on Twitter: @katienolan.

A couple of other follows:

+ ESPN journalist Rachel Nichols, who has spent a glorious amount of time calling out NFL commissioner Roger Goodell the past two years.

Goodell's comments on women & the NFL, and cheerleaders? A hard look from @DianaMoskovitz on this yesterday: https://t.co/1qjltDgCLV

+ Tracy Wolfson, who is one of two sideline reporters for the Super Bowl, and the only female reporter/announcer in CBS’ Super Bowl lineup.

What a game! The Broncos are the AFC Champs! My post game snow angel pic.twitter.com/EQ61JCp52o

+ Deadspin’s Diana Moskovitz, who’s been writing some of the most important articles about sports in the last year, particularly about NFL players’ off-field behavior.

+ Alison Overholt, EPSN The Magazine‘s new (and first ever female) Editor-in-Chief, and also EIC of ESPNW. She talks about race, misogyny, trans issues, and so many other things sports folks shy away from. Plus, her favorite TV is your favorite TV.

I'm so excited that awards voters have finally discovered #TheCW. Too late for Lorelai and Rory and Buffy and Veronica, but still!

.@FOXSports just said all girls know are the "outfits" during this Dolphins game. So, you know, fuck you.

I love this app. I love the tagline (Time to listen, Mister!). I love the myriad ways you can use it. You can time how much men talk in work meetings vs. how much women talk, how much men talk in social settings vs. how much you and your lady friends talk, you can time men and women talking in movies and on TV — and during commercials! Female NFL viewership is growing exponentially faster than male viewership and that goes double for the Super Bowl. Last season Bloomberg did a special report and concluded that the only way for the NFL to grow is for it to embrace its female fans. It should follow, then, that tomorrow’s cacophony of zillion-dollar commercials should appeal to women. It’ll be fun to test and talk about that theory with data backing you up. That’s my plan, at least!

The NotBuyingItApp allows you to join with other women to talk about companies that “rely on misrepresentations of gender and extreme objectification to sell their products.” During the Super Bowl, you can track what people are saying about different commercials and use the app to send messages directly to offending companies and/or post messages to Twitter and Facebook.

Untappd is like Facebook for beer. It’s made for craft beer drinkers who want to track and talk about the brews they’re loving, with a select group of friends. Beer culture is bro culture, for the most part, but women invented beer brewing, dammit, and it’s time for us to reclaim what’s ours! With Untapped, you can hook up with your friends and find out what each of you is drinking/serving for your Super Bowl party, and find out what interesting beers are being served at pubs near you. You can also earn little digital badges. I love little digital badges.

This app will let you livestream The Puppy Bowl on Animal Planet, so you can have it on at the same time as the Super Bowl! 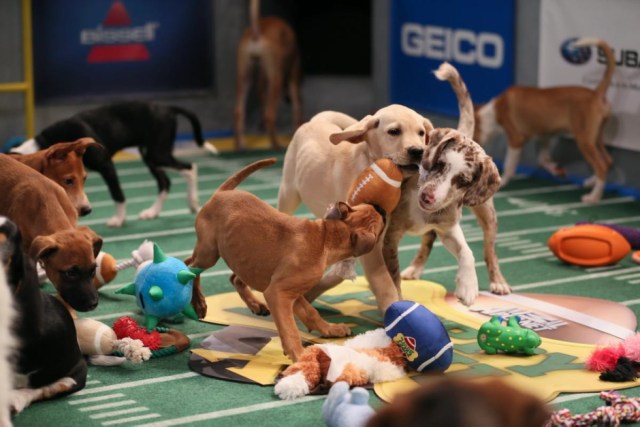