Early 2016 is looking good for queer and feminist reading! Books to look out for include new work from Roxane Gay, Tig Notaro, Jessica Valenti and our own Gabby Rivera.* With poetry, erotica, academic analysis and fiction of all genres on the menu, you won’t have any problems finding something to devour. 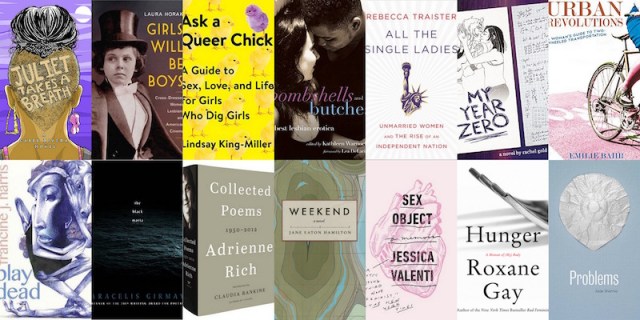 Juliet Takes a Breath, by Gabby Rivera: Juliet Milagros Palante is leaving the Bronx and the mother who, since Juliet came out, might never speak to her again for an internship with a queer feminist author in Portland, Oregon. This debut YA novel from Autostraddle editor Gabby Rivera tells what happens when coming out doesn’t go well — and when running away from your problems looks a lot like solving them. In anticipation, check out Gabby’s writing in our archives. (January 29)

Girls Will Be Boys: Cross-Dressed Women, Lesbians, and American Cinema, 1908-1934, by Laura Horak: Drawing on the early archives of American cinema, Horak questions the assumption that cross-dressing actresses were inherently transgressive. She also argues that cinema played a pivotal role in the representation of lesbian identity, and provides a new lens through which to view gender, sexuality and film. (January 29)

Ask a Queer Chick: A Guide to Sex, Love, and Life for Girls Who Dig Girls, by Lindsay King-Miller: This advice book by long-running Hairpin advice columnist King-Miller covers the range between coming out, your first gay haircut, your first gay wedding and more. (February 2)

Bombshells and Butches: Best Lesbian Erotica, edited by Kathleen Warnock: The latest erotica collection from long-time erotica editor Warnock features all sorts of sex among all sorts of women and people, in places from bars to kitchens to beds to flowerbeds, as well as an introduction by Orange Is the New Black‘s Lea DeLaria. (February 5)

All the Single Ladies: Unmarried Women and the Rise of an Independent Nation, by Rebecca Traister: “[H]istorically, when women were given options beyond early heterosexual marriage, the results were massive social change — temperance, abolition, secondary education, and more.” Traister explores the role of unmarried women across class, race and sexual orientation in radical change in America in this exhaustively researched volume. (March 1)

My Year Zero, by Rachel Gold: Lauren thinks that getting a girlfriend and getting better at school will fix her life, but things get complicated when she meets Sierra and Blake. Gold addresses dealing with mental illness and being out at 16 with her signature empathy and finesse. (March 29)

Urban Revolutions: A Woman’s Guide to Two-Wheeled Transportation, by Emilie Bahr: Cyclist and transportation planner Bahr writes about bike-friendly cities, what makes bicycling a women’s issue, how environments shape opportunities and more in this practical discussion of urban bicycling. (April 12)

Collected Poems: 1950-2012, by Adrienne Rich: Rich is one of the most prolific and influential poets of our time, queer or otherwise, and is notable for her examinations of gender, race and class through poetry. This volume, featuring an introduction by Claudia Rankine, brings together every single poem in her oeuvre, including Diving Into the Wreck and Atlas of the Difficult World. (April 16)

Weekend, by Jane Eaton Hamilton: Two lesbian couples living side-by-side for the summer investigate the crossroads of their relationships, as well as trust, negotiation, what isn’t worth keeping and what is. (May 10)

Sex Object: A Memoir, by Jessica Valenti: “[It]t’s a memoir about growing up in a culture that values women based on whether or not they’re sexy, but hates them for having sex. And, more broadly, my experience of trying to find my humanity and sanity in a culture that doesn’t really see women as full people,” says notable feminist Valenti of her forthcoming memoir at the Cut. (June 7)

I’m Just a Person, by Tig Notaro: A new memoir from notable and hilarious comedian Notaro examines the year she got C. diff, her mother died, she had a breakup and was diagnosed with bilateral breast cancer. Combining silliness and vulnerability, she brings readers along into the dark and out of it. (June 14)

Hunger: A Memoir of (My) Body, by Roxane Gay: An anticipated memoir from the author of Bad Feminist and An Untamed State, in Hunger Gay is “trying to balance liking myself and hating my body and wanting to feel comfortable in my body and believing that we need to, as a culture, do some serious work in changing our expectations for human bodies” and more. (June 14)

Problems, by Jade Sharma: Sharma’s debut novel is also the first book in Emily Books’s imprint with Coffee House Press. Following Maya as her life falls apart, it “takes every tired trope about addiction and recovery, ‘likeable’ characters, and redemption narratives, and blows them to pieces.” (July 5)

* This list is dude-free but please talk to me about Lin-Manuel Miranda’s Hamilton: The Revolution, coming in April, anyway.

What queer/ feminist books are you excited about this winter/spring? Tell us in the comments!