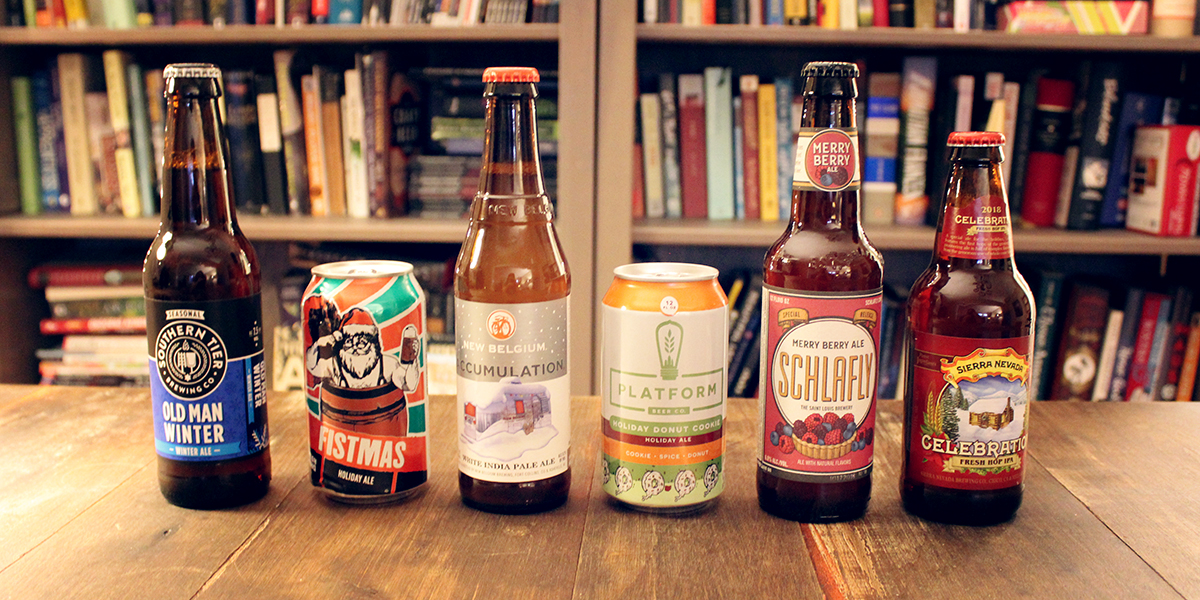 If you’ve been around me or Autostraddle or A-Camp for any length of time, you know I love beer and am determined to see women take back the art of brewing and drinking it! A couple of years ago I decided to rank every pumpkin beer I could get my hands on, which was a Hagrid-grown pumpkin-sized mistake; it burned me out so bad on nutmeg and cloves and allspice I don’t even want to eat pie at Thanksgiving anymore. This year I smartened up and decided to recruit some friends to help me sample the top 12 holiday beers recommended to me by the alewives at my local beer and cheese shop. I made my friends write down their tasting notes on worksheets I printed up. I’m fun that way. Using my friends’ increasingly tipsy notes and my own personal opinions I have ranked all 12 of these recommended holiday beers by how much they taste like Christmas.

“Oh this is just tastes like something you’d try to make me drink any other day,” my friend Anna who drank this with me said. “TOO FUCKIN’ HOPPY,” is what she wrote on her tasting notes sheet. She is correct about it being hoppy but not correct about it being too hoppy because no such thing exists! There’s nothing Christmas-y about this beer except that it’s released only at Christmastime and one of the three(!) kinds of hops in it is the chinook, which always taste a little bit like evergreen.

Many holiday beers, like this one, are Winter Warmers. That means big malty flavors, bitterness, and dark-colored ales with semi-high ABVs. Mmm boi! Winter Warmers also often include spices. SweetWater’s Festive Ale, for example, has just a touch of cinnamon and mace. One of my friends who drank this wrote on her tasting notes sheet, “Burnt brown sugar toast, but in a good way!” Valerie Anne wrote, “PIE BEER.”

If this were the Mary Berry Ale, it would make it to the top of this and every list! It’s not, but it does taste like something Our Lady of Distinct Layers would like: raspberries, blueberries, and blackberries brewed with the intention of capturing the “essence of a delicate French pastry.” It’s really sweet! But not in an unbearably sugary way. It’s fruity sweet, balanced with some malt. It’d be a little bit of all right to drink this as dessert with your Christmas pudding.

Piperworks loves some unicorn fisticuffs. They’ve got the Unicorn vs. Science, the Unicorn vs. Ninja, the Unicorn vs. Zombie, the Unicorn Galaxy. This one, Santa vs. Unicorn is a very tasty American Barleywine. It’s 10% ABV and once you drink a single can of it you’ll think this is the most clever beer description you’ve ever heard in your life: “This Holiday Season, the Unicorn is back bearing his mantle of rainbowed chaos, and this time, it’s seasonal bitches.” Anna, who drank this with me, wrote in her tasting notes, “What is this? What is it. WHAT IS THIS?” I’ll tell you what it is: grapefruit, pine, malt, caramel, and a little bit bread-y. It’s also surprisingly hoppy for a barleywine!

Old Man Winter (Ale) is an English Old Ale with a hearty 7.5% ABV. It actually tastes a little more like an IPA than an English Old Ale, which is fine by me. It’s caramel-y and malty and hoppy and not too sweet at all. Like a dessert with enough savoriness you could eat a lot of it. It also tastes much boozier than it really is, which is also fine by me. If I were trapped in a cabin in the woods in a snowstorm, I would happily share my body heat with this beer to keep it alive.

Another Winter Warmer! What makes Anchor’s Christmas beer really neat is they never brew it the same way twice. Every year it’s slightly different (and every year it’s very good). This year it’s the same toasty dark malts as always but they’ve balanced out the candied apple and maraschino cherry notes with some grassy hops. It tastes like the kind of toast you might leave out for Santa.

My friend who drank this beer with me is our staff writer Valerie Anne! She also happens to be my neighbor and has gone to many of my Bitches Brew classes at A-Camp so she knows New Belgium is the most progressive and woman-dominated brewery of its size in the world. Which is probably why she wrote “I can taste the feminism!” in her notes. Accumulation is a Belgian IPA, which sounds intense but this is pretty wheat-forward. A semi-sweet easy sipper. A warm-weather Christmas. [Update: This batch was brewed by the fiance of one of our readers! I’ve moved it higher up the list due to festive lesbianism!]

First of all, this beer comes in a can that looks like an actual green and red flannel shirt. So that’s just Christmas gay right on the face of it. It’s an IPA but what’s weird about it is the malts are kind of tobacco-y? I’m going to be honest with you, if Charles Dickens were a beer, this would be it. It’s bitter but it gets less so the more you drink it, and it moves through its toasty, tobacco-iness until it feels almost warm and and fruity, so familiar. It does take itself very seriously, though.

Most of the time when beers say they taste like something that’s not hops or malt or chocolate of coffee, they taste like that thing just a little bit. Notes of the thing. Ho ho ho, no! Holiday Donut Cookie tastes like a literal snickerdoodle. Cinnamon, ginger, sugar, even a little milky? It’s too sweet. Not just for a beer. It’s too sweet for, like, a hot chocolate or a Christmas latte from Starbucks. It tastes like something a Buddy the Elf would get sozzled on! (It’s high on this list but low in my heart.)

Valerie Anne also tasted this one with me. “I heart drinking Christmas trees” is what she wrote in her notes and she’s right! It’s not as pine-y as the next one but it’s got just enough pine to balance out the ginger and cinnamon that also fill out the flavor. It’s not as carbonated as you might expect, but that works in its favor. Also it’s called Fistmas, okay? FISTMAS.

This is one of my absolute favorite beers. It tastes like an actual Christmas tree. I didn’t share this one with anyone because no one likes sipping on pine cones as much as me, I guess, and that’s okay. I would drink this year-round, if I could. I would brew it if I were a wood-sprite.

Every year this is the best beer brewed in the United States of America. I walk all over New York City trying to find a six-pack of it and then squirrel it away and ration it out to myself over the holidays and it’s like Santa came to visit every single time. It’s a Belgian Strong Dark Ale, boozy as everything, but it’s also honey and cherries and chocolate and malt and cinnamon and pine and nutmeg and perfect, perfect, perfect. It tastes like everything magical at Christmastime.

Okay, your turn! What are some of your favorite holigay beers?