For more info on sending in questions, see the bottom of this post. Let’s get down to bossing people around on the internet! Today’s contestants include a social smoker who may or may not quit for her girlfriend’s sake and a college-bound chick who wants to date other chicks but can’t seem to break the habit of not dating chicks. Enjoy!

Q:
My girlfriend is really annoyed because I’m a “social smoker.” When we go to parties and other people are smoking, I may have one, or two (or eight) cigarettes. She doesn’t smoke at all. Should I stop smoking to keep the peace?

A:
You should stop smoking only because you want to stop smoking, but let’s talk about why your girlfriend is so annoyed! If it’s something superficial — like the smell, the cost or the social stigmas — it falls under the ‘Sometimes My Girlfriend Isn’t Perfect’ umbrella. Everything under this umbrella is hers to weigh and ultimately either get over or break up because of.

If her annoyance is more feelings/love-based, it’s still up to her to weigh, but it puts more pressure on you to be sensitive to those feelings. Like if her father died of lung cancer, for example. You can’t very well smoke around a person you love when that’s in her back pocket, you know?

Hey let’s play a fun game! Being annoyed by smokers is easily justifiable for most people, because it’s unhealthy and second-hand smoke omg and waaah so smelly, etc. But what if your girlfriend was repulsed by seafood and you were mildly allergic to shellfish, yet every time you were out with your friends you kicked back a couple of oysters? Your overall health would take a hit because of that pesky allergy, but what would that have to do with your girlfriend? Is it up to her to take care of you when you’re sick? What kind of steps is she taking to stay healthy, either for the sake of herself or those who care about her?

I think doing anything just to keep the peace is a good way to build resentment and I hate resentment. It’s the number one reason I say All The Things — I don’t want a single unchecked negative thought swimming around in there. Tiny negative thoughtfish turn into giant angry thoughtsharks and then they eat you and then you die. Simple as that.

Talk to your girlfriend about why she’s so annoyed by smoking and decide for yourself if she’s coming from a place of love or control. But also seriously, you should stop smoking.

Q:
I’m 18, about to go to college, and I’m pretty sure I’m into chicks. But I keep dating dudes even though I’m not into them at all. I’m too shy/ scared of being myself to do anything. So my question is, how do I get over myself and go for what I want?

A:
Going for a new thing you want is terrifying! For some people (hi!) the fear of failure or rejection can be enough to keep them from trying new things, even if they really really want to do them. Dating girls for the first time is no exception, so take a second to realize that what you’re feeling isn’t uncommon, you are not alone, etc. 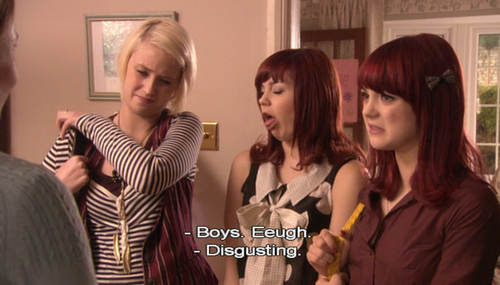 Ok! So you wanna try something new. There are a few steps everyone can take to prepare themselves for a brave new world (of sexy girlparts).

1. Read a f*cking book
The new thing is so very new that you really have no idea what to do or expect, probably. You’re like a child, or a snail in snow. You should read a book about it! How do you feel about YA fiction? I personally love it. Here are few books we really liked and one of them isn’t YA!

+ Empress of the World

+ One Bloody Thing After Another (which Intern Grace describes as “really, really weird”)

Also obviously there’s this handy collection of books and book-related feelings we’ve put together for you!

2. Watch a movie
Movies are like books that talk, so if you don’t want to read, you should watch some films. Let’s call them films instead of movies. Here are some films that Riese and I like:

3. Visualize the future
I don’t mean like, in an effort to manifest your destiny, but visualizing yourself actually doing the new thing can work to trick your brain into feeling like it’s already done something before. I’ve been successfully using this technique since my first real job interview — I had to wear pantyhose and this silk shirt, so clearly I was already having six different panic attacks just based on my wardrobe, and having visualized the little things, like opening the door or handing them my resume, really helped me chill the f*ck out.

You should visualize yourself pulling a girl in for a kiss, or like, a nuzzle? You’re gonna want to nail that move.

The good news is that you’re on your way to college, which is, according to lore and American Eagle ads, where all the girls wear cute sweatpants and turn into lesbians. Find the local group of Autostraddlers via ASS, go to some meet-ups, and join the school’s LGBT group / club. Also, lucky for you, Autostraddle has about 3,000 articles on the topic of lesbiqueer dating, most notably How to Make Gay Friends and Meet Girls: The Ultimate Guide to Effective Queer Socializing, which really was pretty ultimate.

So basically all that’s left is getting some Tegan & Sara tickets.

You should probably share your wisdom and overall feelings in the comments! There’s a good chance I’m totally wrong or left something out or haven’t been yelled at enough today.

Join A+
Related:how to be gayyou need help