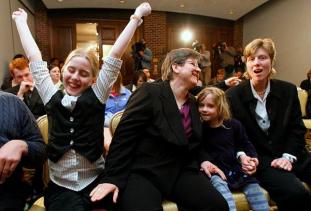 Remember how everyone was kind of surprised and impressed that Iowa, which is not generally considered a bastion of equality or acceptance in any other area, made gay marriage legal? We may have been a little too excited. A poll of Iowa voters shows that 77% of them want gay marriage put to a referendum, and to have a chance to ban gay marriage in the state constitution. It is worthwhile to note that referendum voters have never, ever passed same-sex marriage. Ever. It’s also just weird, though, because apparently 35% say “having gay marriage in Iowa is just not that big a deal” and 45% say it’s not worth voting out the judges who approved it initially. That adds up to like 157%. Good luck figuring that one out. (@joemygod)

This is unsettling news on its own, but it’s even more frustrating when taken in conjunction with the Tea Partier’s announcement that they think gays and lesbians are “too powerful.” Of respondents to a poll that claimed to be aimed at “true Tea Party supporters,” 52% said that “compared to the size of their group, lesbians and gays have too much political power.” What do you even say to that? Like, really? What political power do we have? The power to have marriage taken away from us in one of the few states in which it was begrudgingly bestowed upon us? Yeah, you’re right, that’s something I’d be really jealous of if I had the privilege of being able to gather outside Congress with guns without any police response.

If anyone has it tough, it’s the Tea Party. You may remember this was the exact same argument used in the Prop 8 trials – that because we had progressed far enough to have not one but TWO gay (male) (white) (upper-class) characters on a TV sitcom, that we should rest on our laurels for a while. We still don’t know the outcome of that case – it’s entirely possible that that was somehow a legally convincing argument, and that the combination of Maggie Gallagher and Will & Grace has f*cked us all over. (@theadvocate) (@examiner)

On the other hand, maybe we really do have a chance to turn this all around – maybe somehow Iowa’s crazypants statistics mean that even if there is a voter referendum, it will turn out okay – that for the first time in US history Americans will actually vote for equality. Here’s looking at you, Iowa! Make our dyke dreams come true!

It seems almost like stating the obvious, but I guess someone has to – with all the groaning and hissy fits over ENDA, you’d think someone would have noticed that the passing of the Matthew Shepard and James Byrd, Jr. Hate Crimes Prevention Act didn’t bring any fire or brimstone raining down on us. Apparently not the Family Research Council, though, because look at this video! (@pamshouseblend)

There’s a lot of controversy within the gay community on GetEQUAL’s particular brand of activism. Regardless of how you feel, it might be interesting to you to know that co-director Robin McGehee is apparently pulling down $89,000 per year. That is more than the net worth of every employee of Autostraddle combined, just saying. (@bilericoproject)

Gawker has a headline about a group of trans beachgoers who received complaints from other beach attendees because they were allegedly sunbathing topless. Arguably just as interesting as that story, though, is the fact that I’m pretty sure Gawker has a major pronoun fuckup in its piece. What do you think? The headline is “Topless Transgender Women Bum Out Delaware Beachgoers,” and the text reads in part: “…several transgender women with breast implants were sunbathing topless. But with male genitalia, they can’t be arrested for indecent boob exposure.” (@gawker)

And the news is: we still know virtually nothing about her, even her stance on DADT. “New documents released from the days Elena Kagan served as an adviser to President Bill Clinton show little about the Supreme Court nominee’s views on the “don’t ask, don’t tell” policy. ” (@theadvocate)

Fugitive “ex-lesbian” child kidnapper Lisa Miller, who failed to show up to a court hearing in which she was supposed to hand over custody of their child to her ex-wife, is still on the run but believed to possibly be in El Salvador. (@chron)

The New York Times is profiling a “gay Catholic voice against same-sex marriage,” a woman who identifies as gay but believes her religion requires her (and maybe everyone else gay too?) to remain celibate. It’s at the very least an interesting read. (@nytimes)