Earlier this month, the US Women’s National Team canceled their match against Trinidad and Tobago in Hawaii, the sixth stop on a 10-city exhibition tour following the team’s victory at the 2014 Women’s World Cup. The stated reason for the cancellation: artificial turf that was “not suitable to hold an international soccer match.” The actual reason: sexism in women’s soccer has reached the point of physically endangering members of the USWNT. And they’re not going to take it any more.

Although the maintenance of Aloha stadium’s playing field was unusually bad, the USWNT regularly plays on sub-par artificial turf fields instead of grass. To understand the importance of this, we need to talk about artificial turf. 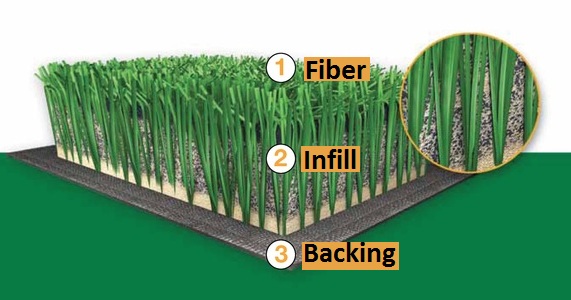 Image adapted from FieldTurf, the company that provided the playing surface for three of the World Cup stadiums in Canada.

What is artificial turf?

Artificial turf is typically made of grasslike polyethylene fibers sticking out of a backing material, overlaid with ant-size granules of styrene butadiene rubber made from pulverized car tires. The polyethylene is the “grass,” and the crumbs of rubber functions as the “dirt.”

In comparison to natural turf, artificial turf makes for a very different game. Crumb rubber changes the way that soccer balls bounce, and “dead spots” on the field make it harder for players to gauge which way the ball will roll. During gameplay, tiny crumbs of rubber are kicked up into the air. They get into players’ eyes, stick to players’ skin, embed themselves in open wounds, and occasionally get inhaled or swallowed. Beyond this, the crumbs are notorious for getting under fingernails, inside shoes, and carried home in gym bags and folds of clothing. For casual players this can be a fairly minor annoyance, but for professional athletes, it impacts their career and quality of life.

“There is no player in the world, male or female, who would prefer to play on artificial grass.” – Abby Wambach, recently retired USWNT forward and greatest soccer player in U.S. history, has said.

Why is artificial turf used?

The first form of artificial turf was invented by Monsanto in 1964, and consisted of polyurethane “grass” laid directly on top of concrete. Originally known as “ChemGrass,” it was renamed “AstroTurf” after the product was installed in Houston’s Astrodome in 1966. The thin, synthetic surface made for hard landings, but it was certainly more economically appealing than the alternative: natural turf that could not survive under the low light conditions of the covered stadium. The product grew in popularity and spread in football and field hockey stadiums across the country.

The version of artificial turf that we see on soccer fields today was invented in the early 1990s as a waste disposal solution for used tires. At the time, approximately 200 million tires were being added to landfills and stockpiles each year, causing major problems due to their chemical makeup, toxic flammability and attractiveness to mosquitoes. The solution: shred these scrap tires and turn the recycled crumb rubber into infill for a variety of projects — including a cushy base for synthetic turf.

A November 2015 article on ESPN explains:

The crumb-rubber recycling process typically works like this: When you get new tires on your car, the tire retailer pays a hauler to take your used tires to a scrap-tire shredding facility. The facility removes the steel and fabric from the tires and shreds them down to smaller pieces of various sizes. Industry publication Scrap Tire News says there’s no U.S. standard for processing crumb rubber, but that processors have adopted a “clean” standard that uses different machines to help remove contaminants and sort the pieces by size. Larger pieces can be used for construction projects or fuel; smaller sizes can be used for athletic fields and playgrounds.

With estimates of between 20,000 to 30,000 tires being ground up per field, the crumb-rubber industry became a successful and productive way to recycle used tires.

The rubber infill gave the field more bounce and cushioned the impact for athletes, preventing serious injuries like concussions. It made the fields more durable and was easy to maintain in a variety of weather situations. Seems like an obvious improvement, right? Not quite.

How safe is artificial turf?

One obvious difference between artificial turf and natural turf is its performance in high temperature conditions. One UNLV study found that artificial turf can heat up to 170 degrees in summer months, exposing players to increased risk of dehydration and heat sickness. Many also get blisters on their feet (“It’s like walking on hot coals with your skin ripping and slowly cracking, constantly”).

Beyond physical/mechanical properties, many have chemical concerns. Unfortunately, there isn’t much comprehensive data available. Crumb rubber is estimated to have 250 chemicals in it, and because it’s sourced from waste products/recycled materials, it’s difficult to make a across-the-board statements about chemical safety; the variation from field to field is too big. Even within a single field (remember the tens of thousands of tires that go into each one?), different areas can have vastly different distributions of materials and concentrations of carcinogens or other harmful chemicals.

According to the turf industry, more than 50 scientific studies have found their products safe. They tend to cite older studies, such as the 2008 Consumer Product Safety Commission investigation which declared synthetic turf “OK to Play On,” and a 2008 study by the EPA with similar findings. Rarely do they mention data gaps or more updated findings.

In 2009, the study by the EPA listed 32 potential “contaminants” in artificial turf fields (including arsenic, benzene, mercury and toluene), but ultimately assured the public that artificial turf was safe. Four years later, the EPA stepped back from its earlier reassurances, noting that the “very limited nature of this [2009] study” makes it impossible to “extend the results beyond the four study sites or to reach any more comprehensive conclusions without the consideration of additional data.” Similarly, the CPSC has gone back on earlier reassurances to the public. The federal agency is not investigating further because they don’t have the resources at the present time.

Although this isn’t the same as a scientific study, anecdotally, there have been some interesting links found between soccer players and cancer diagnoses. University of Washington associate women’s head soccer coach Amy Griffin began looking into the issue a few years ago, after accompanying one of her athletes to her chemo treatment. “Don’t tell me you guys are goalkeepers,” the nurse said. “You’re the fourth goalkeeper I’ve hooked up this week.” Asking around through her network, Griffin found dozens of players in similar situation. As of November, she’d compiled a list of 200 athletes, the majority of them soccer goalkeepers (the soccer position that spends the most amount of time on the ground), with diagnoses of blood cancer (such as lymphoma and leukemia). She has sent her research to the Washington State Department of Health, but at the current time, there are no major federal studies underway to study the effects of long term exposure to artificial turf. The highest profile research underway is a study set to be completed in 2018 by the California Office of Environmental Health Hazard Assessment (OEHHA) . It is funded by CalRecycle, the state agency responsible for recycling used tires.

Our loyal fans: Thanks for standing with us against unsafe field conditions & standing tall for #equal treatment pic.twitter.com/abn560Kitw

What does this have to do with sexism?

Okay, so here’s the crazy thing. For players on the USWNT, artificial turf is their reality. This year, less than 70% of their games were played on natural grass. Eight of their 10 victory tour matches were played on turf. In contrast, the US Men’s National Soccer team reportedly has not played on turf all year. When they’re scheduled for a game in a stadium with artificial turf, sod is laid down for the game, no matter the cost.

That match against Trinidad and Tobago in Aloha Stadium that was cancelled? That call wasn’t even made due to artificial turf. According to former World Cup champion Julie Foudy, when the men’s team plays, US Soccer sends representatives to the venue months in advance to inspect the playing and practice conditions. No representative was sent to inspect the Hawaii field. Instead, when the players themselves walked onto the field, they were greeted with sharp rocks strewn all over the playing surface, and low-grade, aging, synthetic material that was pulling up out of the ground. With Megan Rapinoe‘s recent ACL injury from a subpar training field on their minds, they discussed their options and decided to cancel the match.

In an essay on The Players’ Tribune, the USWNT wrote:

There is a larger, more vital conversation about turf — as it concerns women’s soccer — that continues to make progress. But turf is our reality right now; we play on it all the time. This decision wasn’t about “turf vs. grass.” This was about field conditions and player safety.

It’s as simple as that. Soccer is our job. Our bodies are our jobs. And nothing should ever be put in competition with our protection and safety as players.

These women are the best soccer players in the world right now. They deserve so much better.