For as long as I can remember I’ve been told, in one form or another, that heterosexuality is “natural” and homosexuality is, consequentially, NOT natural (read: a deformity or abnormality). This assertion comes wrapped in a plethora of unattractive forms. Perhaps you’ll remember it from one of its many cameos in your life:

Remember how we can’t serve openly in the military because if we do everyone will throw up in their mouths when it’s communal shower time?

How anyone could rally so fanatically against the most beautiful TV moment in the history of TV is beyond me and the fact that this is still not perfectly ok is further proof of the universally accepted gross-out factor of gay touching.

“Does lesbian sex even count as real sex….wait, does that mean we just had sex?” – Ashley Wright

I could go on but you get the idea: there are many inventive ways that the world tells us that we are unnatural freaks. This argument has gone on long enough. It has been on a destructive rampage for years – ruining the lives of many and justifying the violence of some.

We could continue to respond by aggressively citing the prevalence of lesbian albatrosses (which does come into play later) but I’ve decided to take a more exciting approach and instead just say what needs to be said:

If the penis is so fantastically destined for the vagina then why is a tongue on the clit the one thing that every girl wants[1] and to bone in the butt is the preference of every boy the moment that the lights go out ? 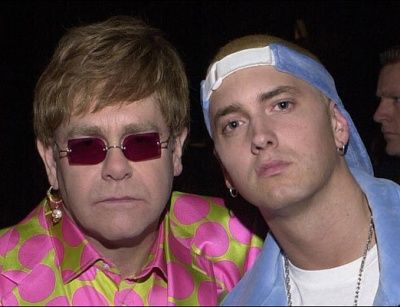 Or to paraphrase Wikipedia:

If you don’t want to take my, or Wikipedia’s, word for it, then consider that even Trojan condoms – made for penis penetration of, well something, but clearly marketed for people of the penis-vagina penetration persuasion — has tried to befriend the clit by including a vibrating finger in a package of condom. 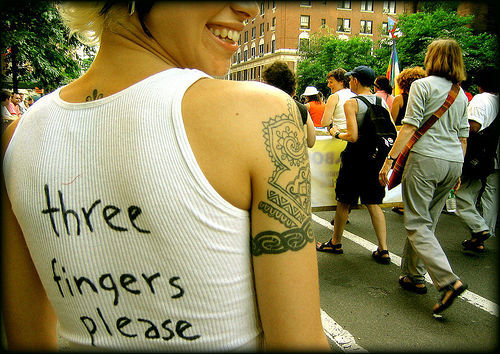 These days, a girl-boy sex activity seeking guy is told even by Trojan that his machinery is inadequate:

So, if the penis is an oh-so-natural fit for the vagina then why the hell did God leave off the vibrating attachment? If PIV is meant to be, why does it so rarely cause pleasure?

I’ll tell you why: Because we’ve been duped!

The heterosexual sex idea is nothing more than, just that – an idea. It’s an idea based on an arbitrarily (or perhaps Machiavellian?) constructed value system that prioritizes procreation over pleasure. But who says making babies is more important than having orgasms? Besides your grandmother?

The moment we re-conceptualize that value system and instead value pleasure before procreation, gay sex wins all the prizes. 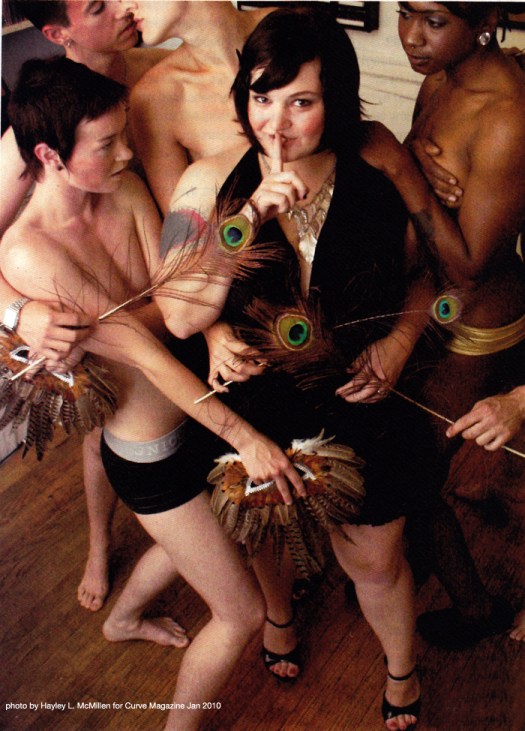 There are some people who will try to fight this basic truth at first. I’m sure many of us have spoken or heard the absurd justification from our straight sisters that sex can be pleasurable even when it’s just about his orgasm. But perhaps there are social elements at work there? Perhaps the intoxicating level of acceptance and approval we feel simply by HAVING heterosexual sex is enough to convince us that we enjoy it. But ladies: let’s not confuse the warm embrace of social approval with pleasure.

I don’t mean to discount those ladies unable to acquire male-esque orgasmic regularity, and I’m not here to endorse ehow answers of measured breaths or vagina yoga. My argument offers  much better road to orgasm or sexual pleasure in general: self-acceptance. I’m not suggesting that ALL difficulties are rooted in psycho-emotional feelings of shame but I do know that being gay or doing gay things and self-acceptance are not exactly life partners. 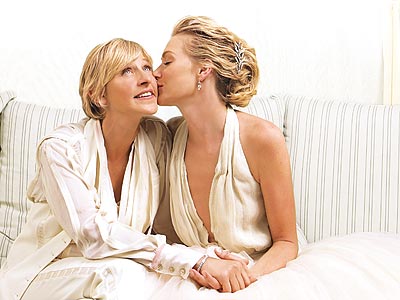 Is this a leap? Maybe. But it’s a leap that enables the blatant truth that gay sex is the biggest pleasure-inducing act ever and the consequential lifting of a lifetime of shame and freakdom from our collective shoulders. It’s another reason for lesbians to feel good about ourselves and another reason why we’re important to the whole world!

“The more complex and sophisticated a social system is…the more likely it is to have homosexuality intermixed with heterosexuality.”

Wha-what?! That is some serious shit. 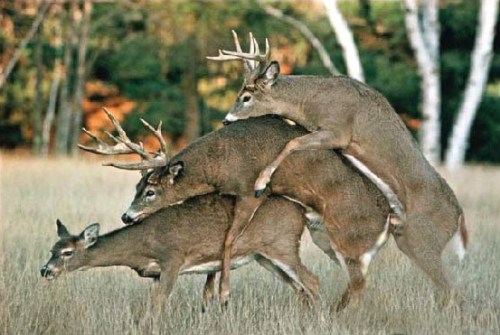 According to Roughgarden’s findings, homosexuality is a defining feature of advanced animal communities. In other words, Ross Douthat, who recently argued in  this little gem of a New York Times op-ed that:

“Lifelong heterosexual monogamy at its best can offer something distinctive and remarkable — a microcosm of civilization, and an organic connection between human generations — that makes it worthy of distinctive recognition and support.”

can put Roughgarden’s study in his pipe and smoke it.

So now we have two pieces of evidence in our arsenal of  “we’re not freaks” argument:

1. If gays are so unnatural and such demon outliers to society then why is everybody’s most pleasurable position the gay position? Why is gay sex more perfectly designed for pleasure than straight sex?

2. If gays are a threat to civilization than why do the smartest animals on the planet basically live Adrienne Rich’s theory of the sexual continuum?  Were they just brainwashed at Vassar? Possibly. 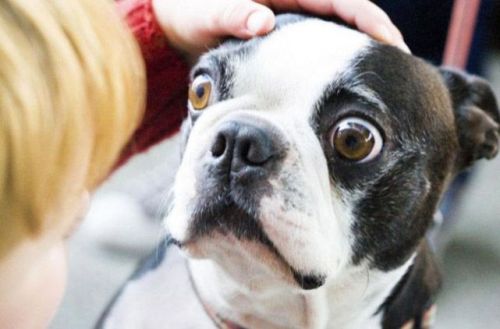 Personally, I’m quite satisfied with these two bullet points. However, if you bring this argument to the face of a less fully-developed person I guarantee you will be met with a response such as this:

“It doesn’t matter if gay sex feels better. The world requires procreation and only heterosexual sex results in procreation.”

Now we’re back on familiar ground. This is the Darwin argument, otherwise known as “species survival” – everything we do has to result in procreation or else it’s worthless and will eventually die out. But Darwin kinda blew up his own spot on this one. If we accept Darwin’s theory that all traits not useful to species survival will eventually die out, why is it that gays keep increasing in numbers over the last few centuries? 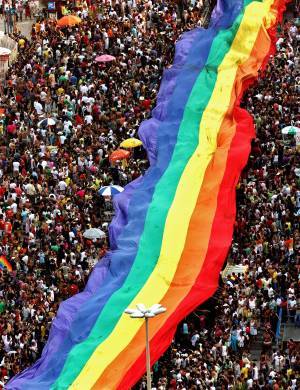 If we’re useless outliers, then why has it been going on forever? Why are there more species that practice gay sex then those that don’t? In fact the only species that don’t gay it up are ones that don’t have any kind of sex whatsoever, like those loser sea urchins. They are so lame. 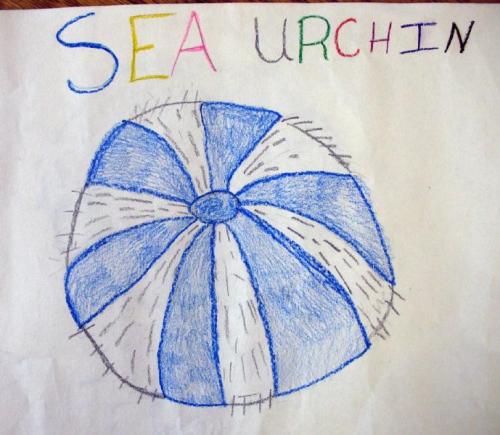 However, your response to this archived argument should not only be about identifying all the gay animals out there from albatrosses to bonobos – which is where it usually stops – it’s about the next phase: if all this gayness had nothing to do with species survival then mother nature would have corrected it long ago. Therefore, animals who have gay sex must be just as important to our species survival as animals having hetero sex.

This is an incredibly difficult theory for people to accept. Even I have trouble seeing the validity of this theory through my non-scientific and shame-colored glasses. 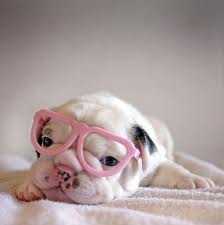 Does sex without baby-making really make me useful to society? It’s hard to believe, but yes, it’s true!

This is where we go back to the Joan Roughgarden study in where she chronicles the many ways in which gay sex contributes to species survival.  You can read a very fair and comprehensive summary of her studies here but for the sake of this article it’s worth simply noting the connection between pleasure and social bonds.

Isn’t it just a bit of a happy coincidence that the exact mechanics of gay sex are basically the DEFINITION OF PLEASURE?  Maybe those nerve endings are where they are for a reason — because gay people aren’t really supposed to be left out of anything that’s fun in life, ever, and our happiness has furthered the species.

In other words, every time we have gay sex a fairy gets his wings and civilization evolves. 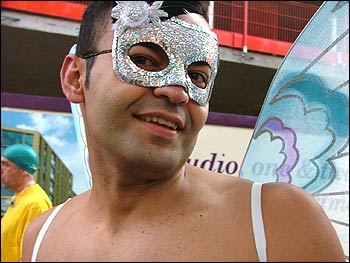 I’m not suggesting the HRC add this new theory to its issues pages, though I’d highly recommend it. I’m just saying that these are the kind of arguments we should make on a regular basis — to ourselves, definitely to our parents, and even to the ‘God Hates Fags’ guy — because if God hates us so much than why did s/he/it lay everything out for us to enjoy?

I’m tired of pretending that we don’t have a good response to the “gay sex is just not natural” argument because we do: there is nothing more natural than pleasure and the tongue is a champion of the masses.

[1] But then does that mean that Vassar discriminates against sea urchins, one of the only animals that doesn’t have gay sex?

Jenny has written 1 article for us.