I told myself I wouldn’t write this article. There’s enough vitriol against trans people in the world. I didn’t want to give more energy to the “toxicity,” as J.K. Rowling has dubbed it. There are so many beautiful stories about trans people that deserve attention.

And then I remembered the Sunday I spent in bed reading the last installment of the Harry Potter saga. I was a twelve-year-old queer sissy who spent much of my adolescence wondering why the world was such a hostile place for me. I drifted into novels as an oasis. For many years, Harry Potter, Ronald Weasley and Hermione Granger felt like my only real friends. I was a snobby know-it-all, just like Hermione.

Now, as an adult trans woman, a survivor of violence, someone who’s worked in the sex industry — many of which are identities named in J.K. Rowling’s letter defending sentiments that have been called transphobic — I still feel a responsibility to stories.

My life is a trans story in the making, as are the lives of my trans sisters. And to let the ignorance of a celebrity author fuel violence against me and my people under the guise of feminism isn’t acceptable. This is about me honoring my childhood self, the me who didn’t have a protector. 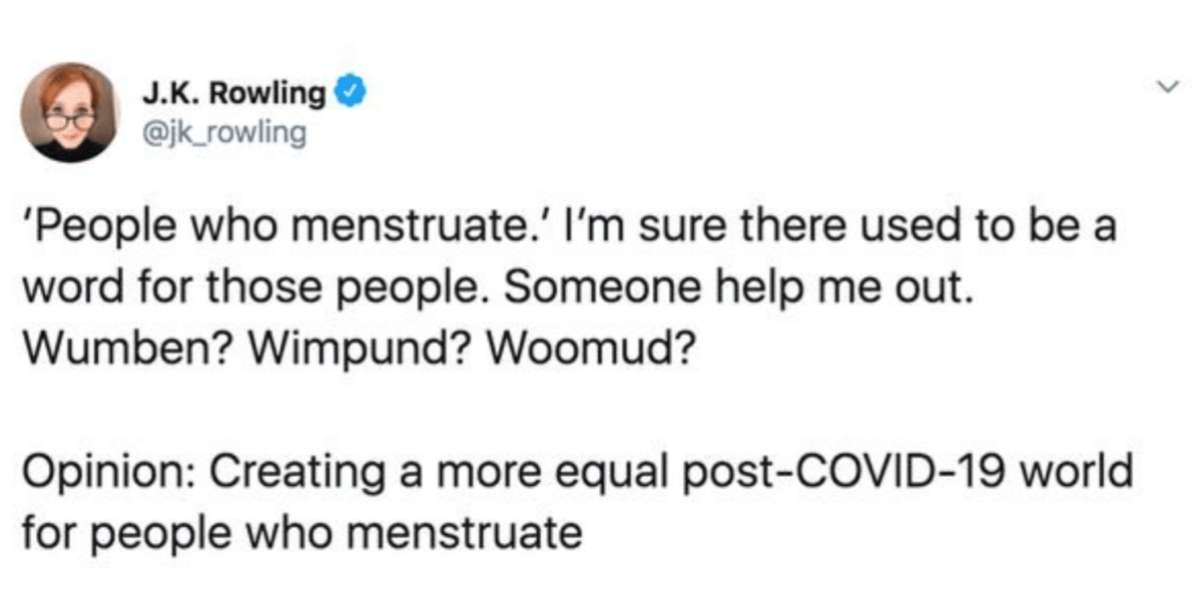 One of J.K. Rowling’s original tweets that stirred up a response from trans activists and allies.

Rowling and I actually have much in common, our commitment to stories being one. We care about the state of women. We think about the world future generations will inherit. We work to change the material conditions that lead to violence.

And yet, the difference between us is which stories Rowling and I choose to fixate upon.

The primary narrative emphasized throughout Rowling’s controversial words is the fear that welcoming trans women into cis women’s spaces will invite violence. Rowling admits that she believes the majority of trans women to be unproblematic, but that the potential of violence alone is enough to reconsider expanding women’s spaces. This scenario, removed from context, could draw fear out of anyone. Violence against women is terrifyingly commonplace. And it’s been normalized to the point where Donald Trump was still elected after the world listened to a recording of him encouraging people to assault women.

And yet, the scenario of men harming women is very different from the scenario of trans women harming cis women. One has become part of the fabric of our society. It’s the reason why almost every parent of a young girl is hypervigilant — because violence against women is expected all across the world. The other scenario is an incredible anomaly, which has yet to have any backing. To use a hypothesis with no evidence and suggest that policies be made around it is absurd. Pushing a hypothesis that actually counters reality indicates that there may be biases at play.

Rowling conflates the two scenarios — she says that men who enter women’s shelters posing as women will use the opportunity to commit violence. What this does is reinforce the message that trans women are indiscernible from men with an ulterior motive, posing as women. This is not an apolitical statement. The brutality inflicted on women continues unabated because our society implicitly has made it acceptable. We hear it in the victim-blaming language, in the way women are made to feel ashamed of what they were doing to provoke an assault. Similarly, trans people are subject to cruelty because false narratives make it seem like trans people are a threat — by spreading myths of the menacing trans person, violence against trans people in the form of physical or legislative attacks could be framed as protective measures rather than bigotry. This is evident in the trans panic defense that allows murderers to receive more lenient sentences by claiming they were in shock after learning an intimate partner was trans: they position themselves as victims to the sinister, deceiving trans person.

Our personal sentiments influence the culture of society and the policies that govern us. In fact, the U.S. Department of Housing and Urban Development recently proposed a rule that allows homeless shelters to discriminate against trans women. In the proposal, the government itself admits that there is zero evidence suggesting such a proposal is necessary because there have been no known cases of trans women posing danger to other women. There is evidence, however, indicating that trans people are the ones that are more likely to be victims of violence.

The widespread fear of men posing as women in public spaces is a relatively new phenomenon. It wasn’t until trans people received unprecedented visibility in North America and Europe that people began voicing concern. It’s become a topic of discussion for every parent, schoolteacher, athlete, activist, and more. But what isn’t new is trans people.

This is the story I want all of us to focus on: that trans people have been shamans, priestesses, teachers, healers, and cultural leaders for generations. And we still are.

And for the amount of time we’ve been wielding our magic, with or without the public’s knowledge, there hasn’t been the fear of violence from us until the modern day. In fact, trans people are more likely to be the ones enduring violence — that’s another thing Rowling and I agree on. There is much evidence indicating that trans people are terrorized starting in early childhood and throughout our lives. So why is that well-meaning feminists seem to focus on us as assailants rather than survivors?

The story we choose to fixate upon holds meaning. It’s a political decision, even if we don’t know it. 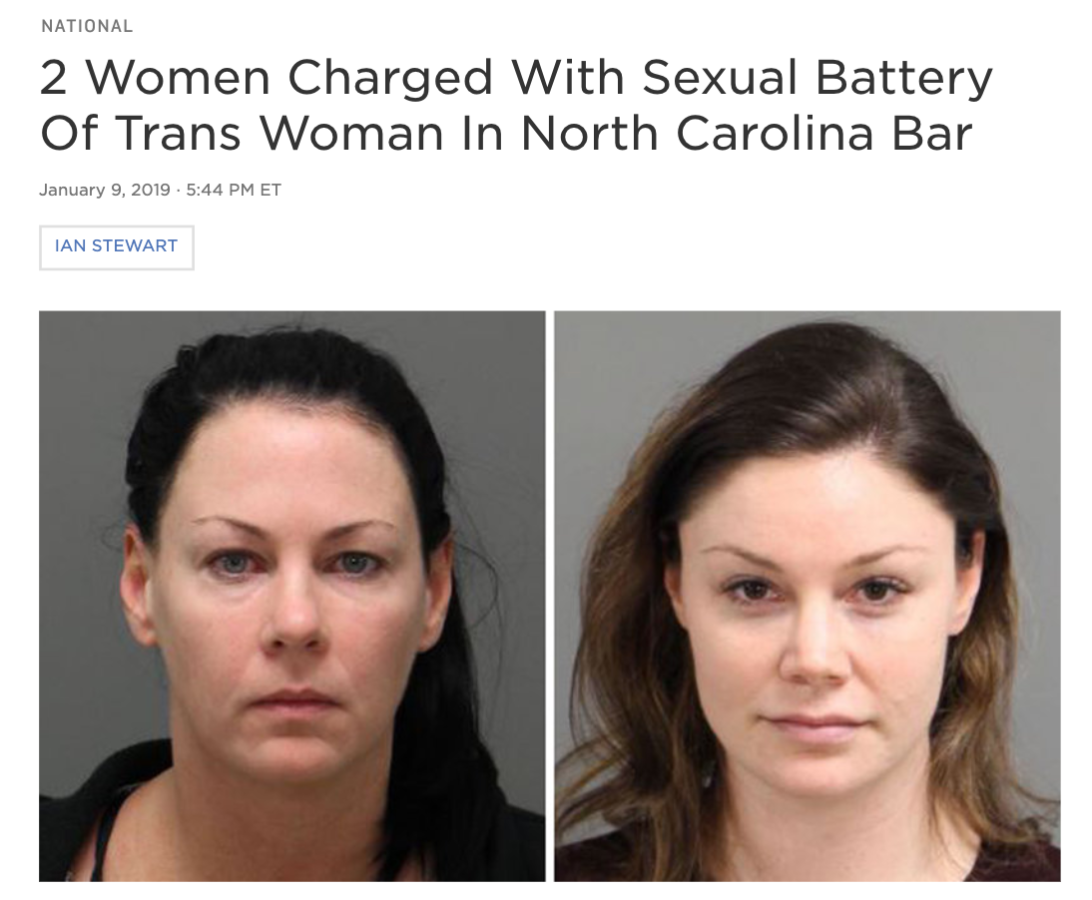 Amber Harrell (left) and Jessica Fowler were reported by NPR as being charged with sexual battery and second-degree kidnapping of a trans woman in the bathroom of a North Carolina bar in 2019.

The reason why trans people have been among us all along, but have had to blend in seamlessly in our times is to avoid the very violence that Rowling fears. Among us trans women, we know that if we’re public about who we are, people call us “men in dresses.” We lose loved ones, suffer abuse by doctors, endure assault by civilians, and are left to die in prisons. There are many more trans people in the world than people even know. It’s likely that Rowling has encountered many of us without her knowledge. In fact, she could have easily run into me on the street, without it crossing her mind at all what genitals I might have. She might wash her hands beside me in a public restroom and not think twice.

While many cis women enter a women’s bathroom with the simple intent to pee, I walk in a women’s bathroom with my chest tight, my stomach clenched, because I am waiting for what feels like the inevitable moment that a cis woman thinks I’m a man who’s pretending. I have prepared to defend myself against the cis woman who, unbeknownst to her, has the same fear in her heart as I do. We are mirrors to one another.

We are survivors, sometimes stumbling through trauma, not recognizing when we might be doing harm, ourselves. I have deep empathy for Joanne Rowling. And I have witnessed what happens when survivors tap into that empathy and create wondrous stories of triumph and friendship. Those are the stories Joanne has written for people like me.

Now is the moment we must reflect on which stories we’ll choose to emphasize. I tend to like the ones with happy endings. And in that story, cis and trans women alike remember that we’re stronger when there’s space for all of us to express our unique magical abilities, when we’re not stifling one another. But when we proliferate the stories that are not based in reality, that actually increase harm for those already at high risk of harm, it’s time to reassess. Spreading narratives that undermine trans women’s well-being does not make cis women more safe; it just makes all women more fearful. If our ultimate goal is to protect women, we should be fostering solidarity among us, so we protect one another, rather than emphasizing unfounded ideas.

Maybe the reason why so many people have a combative reaction to hearing Rowling’s words is because they’ve spent their lives in pain, or because they’ve watched their trans loved ones in pain. Maybe we’d be able to discuss all of this with more generosity of spirit if all of us weren’t so used to protecting ourselves from each other.

As a trans survivor, I want to propose to you, Joanne, that we focus on the right stories, the ones that solve violence rather than unintentionally reinforcing them. What if we pooled our efforts collectively at transforming the circumstances that lead to violence? What if we were so committed to protecting one another that assailants were deterred altogether from doing harm because they knew they’d lose to fierce resistance? What if we didn’t have to protect women in the homeless shelter, because the shelter was empty? What if those women were instead in loving homes where they didn’t live in danger? 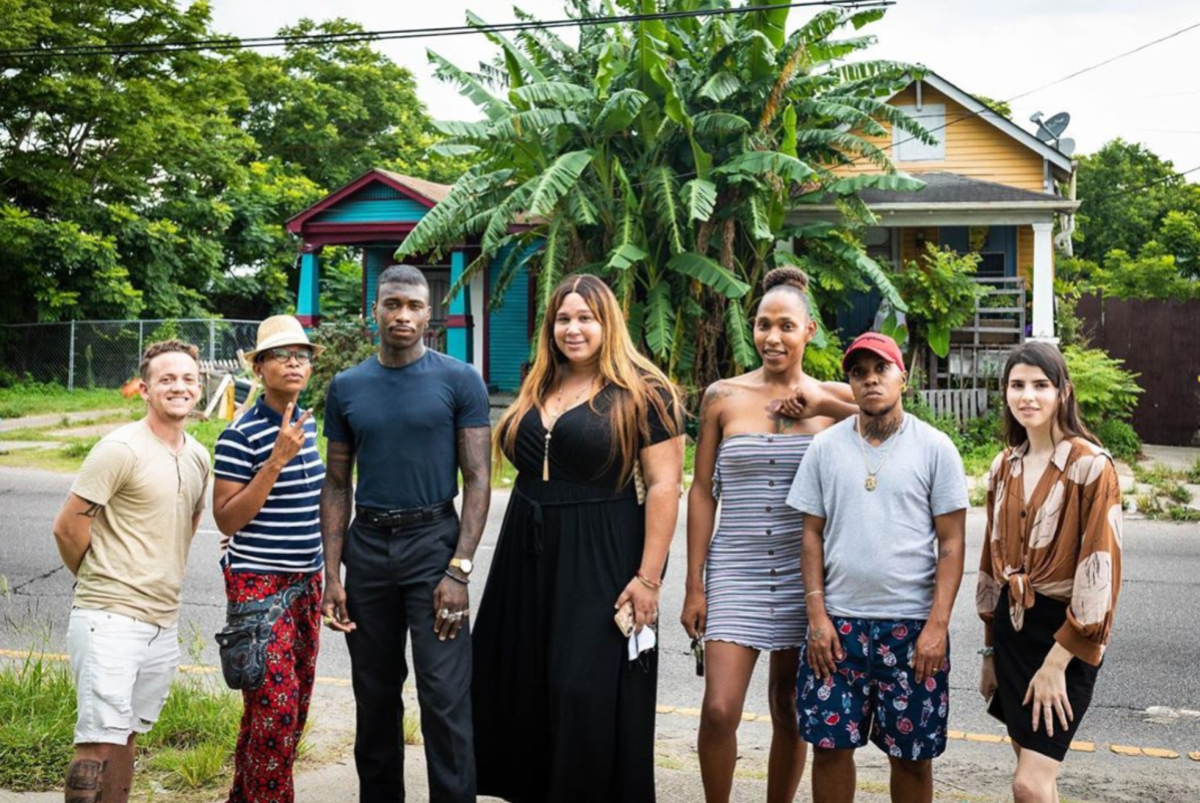 The founders circle of House of Tulip, a housing initiative building permanent housing solutions for trans people in New Orleans, with Yves Mathieu. Via their Instagram.

That’s something we both want. That’s a world that is possible when we give our energy to the stories that transform, the ones that are born from our childlike inclination towards abundance and expansiveness rather than our fear of what we don’t know. That’s the world survivors deserve.

What if the woman who intended to attack me in the bathroom saw the fear in my eyes and realized that we’re both incredibly tired of being wary of peril at every turn? What if we acknowledged each other as mirror images, even with distinct lived experiences? What if we turned our focus towards addressing that fear and recognized that, in the case that a threat presents itself, it’d be much easier for the two of us to take it on together than alone?