Do you know what happens when Don’t Ask Don’t Tell gets repealed? No, not the uprising of the United Homosexual Baby-Stealing Legion. And no, the United States military doesn’t dissolve into a cacophony of two million soldiers dancing simultaneously to “It’s Raining Men.”

What happens? This does: The Navy’s traditional first homecoming kiss gets to be shared by a lesbian couple, possibly (and most likely) for the first time ever. Both women are sailors in the US Navy — 23-year-old Petty Officer 2nd Class Marissa Gaeta and 22-year-old Petty Officer 3rd Class Citlalic Snell — and Gaeta had just returned to Virginia Beach from several months at sea. Snell, in civilian clothing, nervously “twist[ed] the small diamond ring on her left hand” as she waited for Gaeta to disembark prior to the kiss, according to The Virginian-Pilot. Aww. 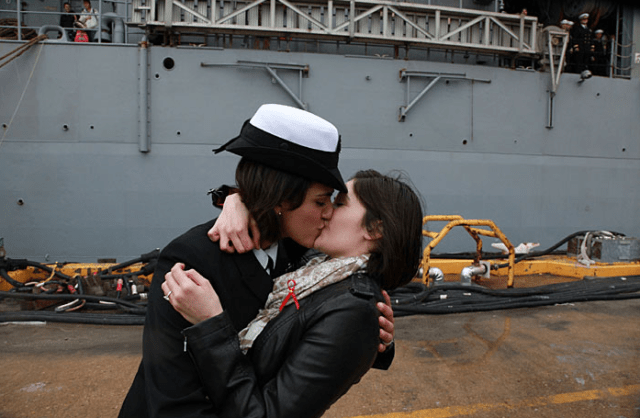 Petty Officer 2nd Class Marissa Gaeta, left, kisses her girlfriend, Petty Officer 3rd Class Citlalic Snell, at Little Creek in Virginia Beach on Wednesday, Dec. 22, 2011. It's a tradition at Navy homecomings that one sailor is chosen by raffle to be first off the ship to kiss a loved one. Wednesday, for the first time, the reunited couple was same-sex. (Brian Clark | The Virginian-Pilot)

This iconic homecoming kiss between two women is reminiscent of another iconic kiss, V-J Day in Times Square, where an unnamed sailor tips back a girl in white for a kiss in New York City. The cultural importance has changed this time around, though — while the first iconic homecoming kiss celebrated V-J day and the end of World War II, this time around, the kiss locks into place the recent repeal of DADT and signifies the end of officially sanctioned discrimination on the basis of sexuality in the military.

Put simply, this is a big deal. Snell puts it best herself in a video interview with The Virginian Pilot (embedded below):

“[The kiss is] significant because it’s the first time where we can actually show who we are. We can be public about it and we don’t have to hide our relationship … I think [the repeal of DADT is] something that’s going to open a lot of doors for not just our relationship but other gay and lesbian relationships that are in the military now.”

The fact that this kiss wasn’t conceivable only a few months ago is unreal. And it’s not as if queer soldiers didn’t exist under DADT, even if the military wanted to believe otherwise — queer soldiers have been around and serving all along, and their straight peers know it, too. I met a few soldiers on leave in a West Village lesbian bar last summer, and a straight soldier told me about how the friend he came to the bar with was a lesbian. We talked a bit about how she was having such a difficult time in the army because of DADT and how one of his gay peers had committed suicide not long before we met. The point he kept pressing, though, was how difficult it was for his queer peers to function under DADT, with the day-to-day secrecy and self-denial taking such a psychological toll. And the idea that these soldiers couldn’t even greet their same-sex partners when entering or leaving a military area just seems more and more appalling.

DADT is over, and this kiss seals the deal (so to speak)! Now, soldiers can openly support their queer counterparts, as Gaeta’s shipmates may have done for her. Traditionally, the sailor who gets to deliver the homecoming kiss is selected by raffle, with tickets $1 apiece. Gaeta mentions that she purchased 50 tickets but had no idea she would be selected, as other sailors had bought a hundred or more. The adorable part: Gaeta suspects that her division might have chipped in to tip the odds in her favor.

It certainly is about time, isn’t it?