We’ve all heard of the Westboro Baptist Church. Some more than others. Some of us may have seen them in person. I have. When they protested the Rutgers University inclusion of Hillel House, we out-sung their six person protest  with our 200 person protest (I actually remember more than 200). They left early. Westboro Baptist Church has been in the news a lot lately. First they decided they were going to protest the Sandy Hook Elementary School Vigil and subsequent funerals (they turned out to be no-shows, thank goodness) because they believe the deaths were brought about by a God angry with Connecticut’s gay marriage legislation. In response to this, hacktivist group Anonymous obtained names, phone numbers, email addresses and more for each member of the Westboro Baptist Church and then bitch-slapped them with the information by publicly releasing it, which we reported on as it happened. And now the We The People petition to the White House asking for Westboro Baptist Church to be classified as a hate group (something Southern Poverty Law Center has been doing for years) is the most popular petition yet. 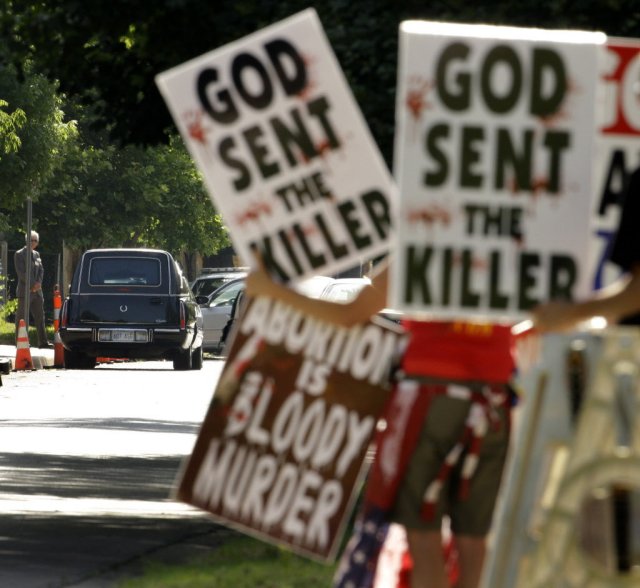 I almost typed four separate lines of ellipses just to convey to you the complete and utter confusion with which I view this situation, but settled for just two. How far right could anyone possibly be in their political or religious ideology that Westboro Baptist Church is to their left?

Basically it seems as though Fox Nation, a spinoff of Fox News, wanted to align themselves with The Patriot Guard Riders, who were allegedly going to counter protest the Westboro Baptist Church protests at the Sandy Hook Funerals (by the way, the Patriot Guard Riders never did and actually never planned to). So they framed the story as conservative bikers versus left-wing nut jobs because apparently Fox Nation thinks there are only two sides to everything, liberal and conservative. And in this version of the story, Fred Phelps is still a democrat. The supposed news story is also about three lines long. They use criticism of this story as the citation for their claim, apparently one of their pundits took issue with this article calling the group “right-wing.”

Oh how is this problematic? Let me count the ways.

Going with the idea these religious wing-nuts are talking politics with us (and aren’t just an inbred group of lawyers looking to make their living on spewing garbage that they call religion), they have more in common with the definition of “right-wing” due to the term “reactionary.” While they are certainly a radical bunch, reactionary means opposing social liberalization or change. If queers marrying queers isn’t social liberalization, I’m not sure what is. Right-wing politics, at least in the United States, are usually built on maintaing a social hierarchy of some kind, much like the Westboro Baptist Church’s hierarchy of the select few who will be saved versus the masses that will go to hell. Basically duh, WBC is a right-wing nut group. There is legitimately no denying that they’re so far to the right that they’re in their own special right-wing place full of terrible. If Fox Nation ignores that, they ignore life as we know it. It is mind-blowing. 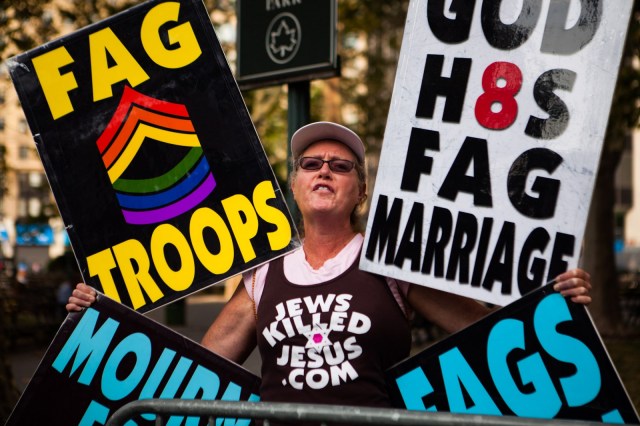 It is my opinion that Fox Nation and others who would call the Westboro Baptist Church left-wing are attempting the kind of political distancing that would associate their opposition (liberals) with this highly undesirable group; however, an attempt to associate liberals with a group that is diametrically opposed to most liberal causes—gay marriage, inclusion and the like—cannot possibly work. In this case, no one except the Westboro Baptist Church supports the shooting of innocent five-year-old children. It is indicative of the political times we live in that the only way to denounce a group in our polarized party system is to align them with the other group. Not only is it wrong, but it does injustice to political thought; I cannot think of a single person in my life of any political ideology who thinks Dawn Hochsprung, the Sandy Hook elementary school principal, had it coming. But the scary part is that today’s right-wing politics actually do have more than a few things in common with the extremely unpopular WBC – and it is problematic to suggest otherwise. 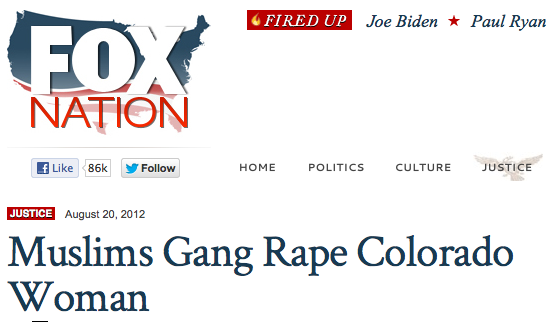 Political spin is always a thing these days when reporting news of any kind. I am certainly not fair and balanced: our live-blog of the Presidential Election was a liberal Obama celebration of love and gayness, so it’s pretty obvious where I’m coming from on the political spectrum. But political distancing of this type and scope is so problematic because it means a failure to examine the bias behind your own beliefs. Fox News, Fox Nation and publications like them actually do use fear and racism to further their agenda in news reporting, like the Westboro Baptist Church does. And this headline, taken down after a disagreement between two branches of the Fox brand, was certainly anti-gay. Bill O’Reilly is a conservative commentator with a religious agenda, the same religion that the Westboro Baptist Church makes a claim to (though to be honest, I wouldn’t call them Christians). The Tea Party is also a reactionary, socially conservative group whose grand majority of members also believe the gays are going to hell. To the right-wingers and especially to Fox Nation: You can’t pick who shares certain parts of your values, and as Salon reports, Fox Nation’s values on gay people, Islam and Obama are actually pretty closely aligned to views espoused by Westboro Baptist Church. Even if you are embarrassed by the idea that you believe and write the same things that WBC does sometimes, the “your team, not my team” strategy will not work in this case; conservatives need to really think about the biases that motivate their reporting and political decisions, not just shunt this ugly part away from them as far as they possibly can. 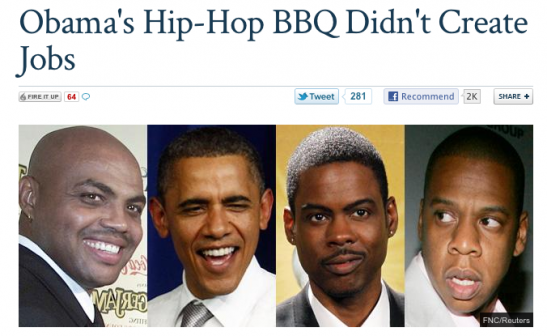 So who should claim this hate group as a member of their ideology? Right-wingers and left-wingers alike probably don’t agree with 99-100% of the things that WBC says. The WBC are a religious, not technically political, group, but they espouse a “religion” unlike anything I’ve ever seen in my life, and though they espouse hate, they’re not the only religious group to do so.

I don’t think Westboro Baptist Church has to play on anyone’s team. We can all reject them. I don’t think either side has to own a group that thinks children deserve to die and that god sent Adam Lanza because he was pissed about the gays. I don’t think that anyone has to own the group that begins every sentence with “God Hates.” I’m pretty sure WBC is their own brand of crazy. However, we need to make sure that if we are rejecting their belief system, we are truly rejecting it. It is socially and politically irresponsible to claim that they play for the liberal team just because these right-wing, religious cult members are too much like mainstream Republicans and conservative news sources for anyone’s comfort, and yet use the same techniques and believe some of the same things. Let them be wing-nuts. Declare them to be a hate group. Denounce their actions and use their views as a parable against hate and a way of examining our own values—a litmus test to make sure we make our decisions with love. If you are embarrassed to be like them, change your thinking. But left-wing? I think not.