The most surprising thing about my grown-up life is how I want everything in my house to be super tidy. Appliances lined up in a nice row. Remotes tucked away into their little box on the coffee table. Quarters and nickels and dimes in the spare change container. Furniture: dusted. Mirrors: Windexed. Floors: Vacuumed. It’s surprising because I was the messiest kid you’ve ever heard of in your life, clothes and books and basketball shoes and pencils and Legos everywhere. In the third grade my teacher got so angry about the wreckage inside my desk, she one time flipped it over when I was out on the playground for recess. (She was not a very good teacher.)

I have ADHD. Hardcore ADHD. Despite my Hufflepuffery, I spent most of my life not being able to find things.

Not anymore, though! One of the life skills I have learned as an adult is that if I have a place for everything, I can keep everything in its place — and it makes my life so much more peaceful and productive. Having a clean house makes me feel really good in my brain and in my heart. These days I can’t even concentrate if I’m surrounded by clutter.

Because I have this obsessive need for tidiness, and because I work from home while my girlfriend works ten-hour days in an office, and because I’m like that tree from The Giving Tree, I do most of the housework in our two-story New York brownstone. A couple of months ago my girlfriend, Stacy, asked if I’d like a Roomba, one of those little disc-shaped vacuum cleaner robots that are most famous as the mode of transportation for that cat in the shark suit. Well, of course I said yes. Having a Rosie Jetson has always been a dream of mine. 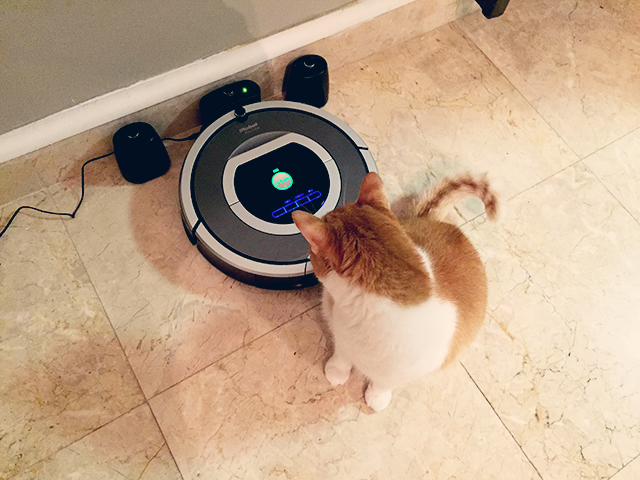 COME AT ME BRO

First, let me tell you how it works. Roo sleeps on a little docking station that’s plugged into an electrical outlet so he can get charged up while he waits for you to tell him how to live his best life. You can schedule him to undock and clean on certain days at certain times, or you can just push the glowing green CLEAN button on him and he sets to work. There are two cleaning settings: REGULAR and SPOT. REGULAR clean just means that Roo ventures out into the room and cleans the whole entire floor. SPOT mean that Roo starts twisting around in a tiny circle and slowly makes his way out into bigger circles; then, he zooms back and forth in the same area until he’s convinced he spot cleaned what you needed in a very satisfactory way. (SPOT is good for when you spill an entire compost pile’s worth of coffee grounds onto the floor, for example.) The 700 Series and 800 Series actually have a thing called DirtDitect that lets Roomba know if there’s enough dust and debris in a single place that he should spot clean there for a while.

Roo has a lot going on underneath it. He’s got two rotating rubber and brush cylinders that break down dirt and debris. He’s got a really high-powered vacuum. He’s got the compartment where he stores all the dirt off your floor. And, best of all, he’s got this sidebrush that whirls around in a circle about and two inches outside of Roo’s reach so he can sweep away all the dust and dirt and pet hair from near the wall and in corners, and then suck it right up. There’s also a HEPA filter that works really well. 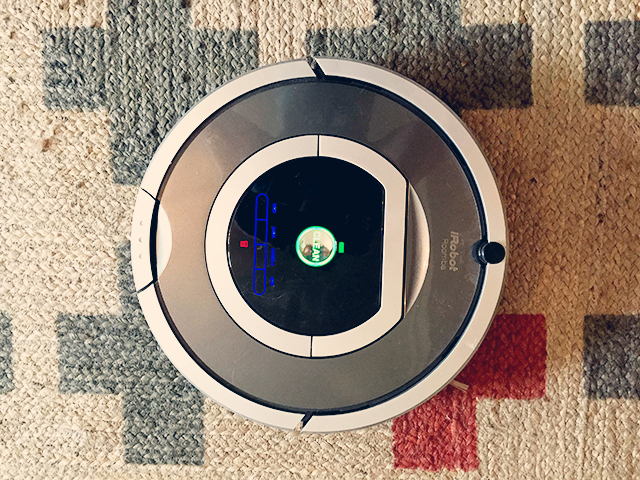 Roomba signaling that his tummy is full.

The way you remove the dust bin is like pulling out a little drawer. It’s very easy and you just empty it into the garbage and slide it back into Roo’s belly and he goes right back to work. Just in terms of cleaning effectiveness, Roomba is the best vacuum cleaner I’ve ever owned. It’d be worth it to have Roo, even if I had to manually operate him.

Okay, but let’s talk about the magic. When Roo first came into my life, I followed him everywhere, convinced he was going to get stuck underneath something or smash himself into the wall and die or only clean a few square feet of floor or trip over the rug, but Roo is a gosh dang genius. He knows when he’s getting close to a wall, so he slows down and nudges it instead of ramming into it. Same for table and chair legs; and he can tell the difference between those things! When he nudges the leg of a piece of furniture, he stops and makes a loop or two around it to make sure he’s cleaning every inch of ground. He cleans under the couch, the record player, the coffee table, the mini bar, and the TV stand with ease. He navigates his way under the kitchen table and around all the chairs. He has never gotten himself into a pickle he couldn’t work his way out of. He even knows where the stairs start, so he cleans right up to the edge but then turns around and scoots back to a safer place.

When his rubbish bin belly is full, a little red light comes on and you just have to open his drawer and take it out and empty the debris and slide it back in.

He cleans tile and hardwood and rugs with equal vigor and ease, and has no trouble distinguishing between the two if they’re in the same room. 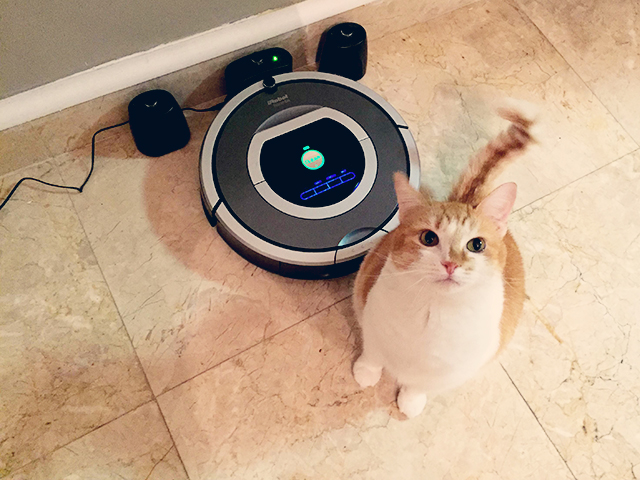 700 Series and 800 Series Roombas come with two little “lighthouse” towers that operate with D-size batteries. You can use them to signal Roomba to stay out of a specific area, like if you don’t want him to go into the kitchen or the bathroom. You just put the little tower at the doorway and tell it to tell Roomba no. Or, you can use the lighthouse to signal to Roo that he’s not cleaning one area well enough, so he should concentrate on that and not forget about it. (It also works if, like us, you have an kitchen and a living room/dining room that are separated by an open door and Roomba needs a little help threading the needle and remembering two rooms exist in that space.)

Roomba will clean for a programmed amount of time, or he will clean until you tell him to stop. It’s up to you!

Roomba also communicates with you through chimes and dings. He’s not very good with the cords from window blinds, so if they’re dragging on the floor for some reason, he’s going to get tangled up in them. When he does, he chimes a WOMP WOMP sound and stops moving, so you can come set him free. When he returns home to his dock (which you tell him to do by pushing the DOCK button on his back), he makes a triumphant set of chimes to let you know he arrived. He chimes a little notice if his battery is starting to run low (but one full charge runs 150 hours, so there’s no real reason to ever hear that). And he chimes excitedly when he’s first exiting the dock and getting ready to work. 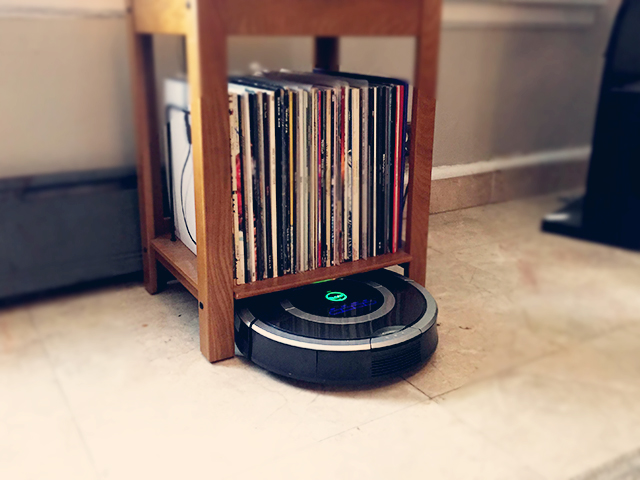 Roomba deftly cleaning under the record player. (He never gets stuck!)

These are the ways Roo has made my life much better:

He cleans more effectively than me.

He saves me a couple of hours every week! (Every three times Roo cleans, he requires about ten minutes of TLC, just cleaning the hair and stuff out of his brushes and nooks and crannies. It’s very easy. Roo comes with his own cleaning tools.)

He cleans underneath everything, including the bed! So I never have to crawl around with a little sweeper or a Dust Buster or the hose detached from the upright vacuum.

When we’re cleaning at the same time, it feels like I have a little WALL-E buddy tag-teaming life’s hard work with me.

My girlfriend and I never argue about vacuuming now.

I also want you to know that I have offered Roo a sock multiple times, but he’s never accepted. I’m a card carrying member of Hermione Granger’s S.P.E.W. It seems like me and Roo were meant to be.

Join A+
Related:regularwe're all about it